Main Character Index
A list of non-affiliated characters in the historical portion of Assassin's Creed Origins.
open/close all folders

Bayek's best friend, fellow Medjay, and protector of Siwa, who took over defending the town when Bayek left in his quest for revenge.

A female elder of Siwa, she's looked over Bayek and Aya when they were children. 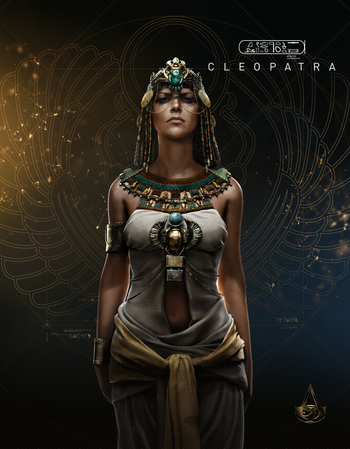 The last Ptolemaic Pharaoh of Egypt, and an ally of Bayek and Aya. 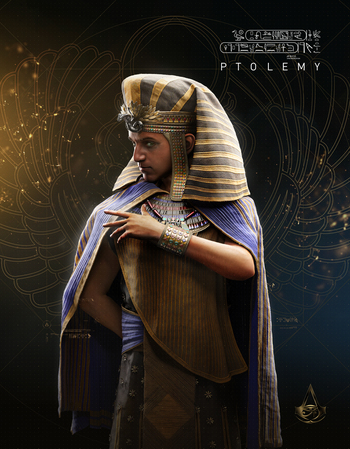 The younger brother of Cleopatra, he wishes to become the sole ruler of Egypt.

The Greco-Sicilian bodyguard and friend of Cleopatra.

Elite agents for the Pharaohs who act as bounty hunters. After Bayek kills one of their number in order to protect Aya, they begin hunting him in revenge, having set patrol routes throughout Egypt as well as responding to alarms.

Chief agent of the Scarab, who tyrannises the city of Sias and its surroundings.

A Greek man in Philedelphia and his wife, who oppose the Crocodile's actions in the Faiyum.

Kawab
The son of Taharqa, steward of Letopolis. 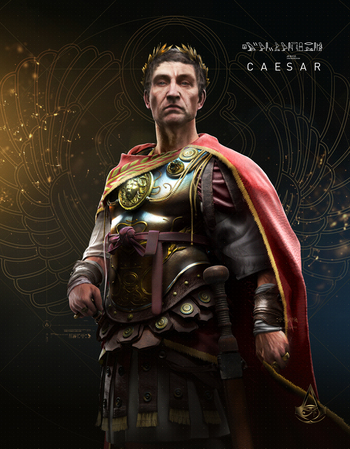 "Caesar. The legendary tactician with the might of Rome at his back. His true motives are unclear."

A general of the Roman Republic and eventual ally of Cleopatra.

Former member of the First Triumvirate, Pompey sails for Egypt after his defeat of Caesar at the Battle of Pharsalia.

A general in Cyrene, who works under Flavius.

A friend of Bayek's from Siwa turned gladiatrix at the Krokodilopolis arena.

A gladiatrix at the arena of Cyrene implied to be from Han Dynasty China.

A minor target and insane Cult leader protected by the Order of the Ancients, who nonetheless has a White Void Room execution.

Trials of the Gods

A series of three optional battles against incarnations of Ancient Egyption gods. Succeeding in all of them unlocks a legendary Anubis-themed outfit for Bayek in addition to the four pieces of equipment he gains by defeating the individual gods.

The jackal-headed Ancient Egyptian god of the dead. He appears in the northernmost part of the Great Sand Sea.

The crocodile-headed Ancient Egyptian god of water and fertility. He appears in the swampland of Heraklion Nome, a region of the Nile Delta far to the northeast.

Sekhmet
The Lion-headed Goddess of War, Healing and the Sun. She appears in the desert south of Egypt.

Introduced in The Hidden Ones DLC

Leader of the Nabatean rebellion against the Roman occupation of Sinai.
Shadows of the Scarab
Bounty hunters who fill the role of the Phylakes in the DLC.

Introduced in The Curse of the Pharaohs

Note that the plot of The Curse of the Pharaohs is a mystery. As such details about the characters below may be inherently spoilerrific and spoilers will be unmarked. You have been warned.
Isidora
Amun's high priestess and head of the Thebes Temple. She helps Bayek find out who unleashed the Pharaohs' curse on Thebes. In reality, she did.—-
Djehuti
A priest who worships the heretic Pharaoh Akhenaten. The village he serves is being spared by the curse.
Irsu
A notorious tomb robber who stole a relic from Nefertiti's tomb which is believed to have brought the curse to Thebes, initially.
Sutekh
A vagabond and troublemaker whom Bayek continuously runs into, and a descendant of Ramesses II.
Merti
Bayek's initial contact in Thebes, an old associate of Aya's. Is also the smuggler, the Lotus.
Tehemet
A historian and antiquarian living in Thebes and studying the nearby tombs.
The Pharaohs
The ghosts of old pharaohs, roaming the farmlands around Thebes, attacking all in sight for reasons no-one understands.
Shadows of Anubis
Jackal-headed warriors who appear in the afterlives, with unique ones appearing in Thebes after Bayek defeats a pharaoh. They functionally take on the role of the Phylakes or the Shadows of the Scarab.