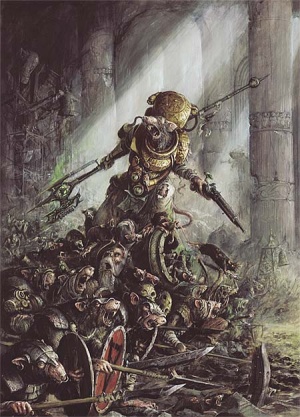 We're going to need a bigger cat...
"All decent folk find the common rat repulsive. Harbinger of disease, it scavenges on our waste-heaps and frightens our children. How immeasurably worse then is the foul Skaven — standing on its hindlegs in foul parody of a human. Rats as tall as man, and blessed with the most vile intellect and cunning. They are the dark side of our souls, come to destroy us for our sins."

The Skaven are a race of vicious, cunning Ratmen found in great numbers in the Under-Empire, a vast network of tunnels stretching across the Old and New Worlds. Their origin is shrouded in mystery but their goal is obvious: to conquer the world. The Skaven are a treacherous and ambitious race and while they could be formally divided into clans each having their specialties, the truth is all Skaven fight for themselves. Only their worship of the Great Horned Rat and deference to the twelve powerful Lords of the Council of Thirteen has prevented their society from imploding.

The Skaven's battle doctrine is to bring a literal horde of fast but ultimately poor troops, as Leadership is remarkably low across their forces. However, the expendable clan warriors are completed by an eclectic array of specialized units forming the actual danger. Be it the Grey Seers and their magic, the powerful yet unreliable machines of Clan Skryre, the plaguemasters of Clan Pestilens, the warmutants of Clan Moulder or the assassins of Clan Eshin, those all come in numbers large enough for casualties pile up quickly in the battlefield... often without the enemy's intervention, at that.

Trying to take over the world, the Skaven have no allies nor do they need them, such is their numbers. The one reason they haven't succeeded yet is the internecine power struggle running rampant across Skaven society, between clans, equals, superiors and subordinates. However, they are particularly bitter enemies with the Dwarfs whose Karaks they besiege and the Lizardmen who regard this unplanned race as an error to wipe out. 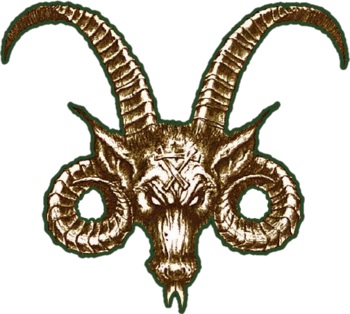 The symbol of the Great Horned Rat

A Chaos God, the Great Horned Rat is the supreme deity of the Skaven, who brooks no other gods before him. He represents all things the Skaven are, or wish to be. Undying and eternally scheming, this cunning deity patiently awaits the day of the Great Ascendancy, when his children will swarm across the face of the world, devouring it from within. Entropy is his mantra; decay is his stock in trade. All things must rot, figuratively or literally, and the Horned Rat and his offspring are the worldly reality of this simple truth.

Skaven society is dominated by the four largest, oldest and most influential of the clans, which enjoy a level of power and social standing beyond that of any of the lesser ones and who provide specialist services for other Skaven to purchase for considerable prices. These are Clan Eshin, whose stealthy assassins never find dearth of work in Skaven politics; Clan Moulder, a collection of mutators and monster breeders who make their fortune selling off their assortments of war beasts and the services of their animal handlers; Clan Pestilens, which is as much a cult to disease as a political force; and Clan Skryre, which provides the bulk of Skaven military technology. 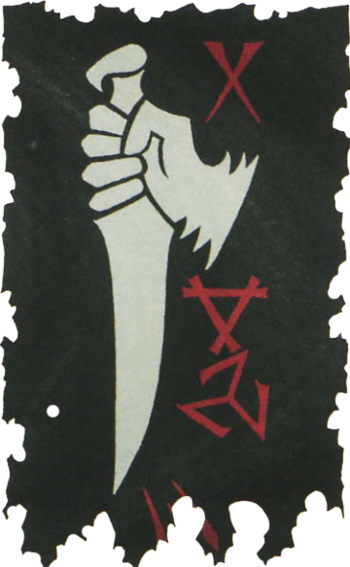 Clan Eshin vanished into the distant East early in Skaven history, and when it returned it had become finely honed in the arts of subterfuge and stealth. The deadly assassins of Clan Eshin soon established themselves as an invaluable tool for enforcing the rule of the Council of Thirteen, ruthlessly assassinating any challengers to their power and dispatching any surface-dwellers who become too well-informed on the menace below. Eshin agents are the boogeymen of the Under-Empire, and will perform assassinations, sabotage and espionage for anyone who meets their prices — and in the cutthroat world of Skaven politics, Clan Eshin is never short on business. The symbol of Clan Eshin is a white hand clutching a dagger upon a black field. 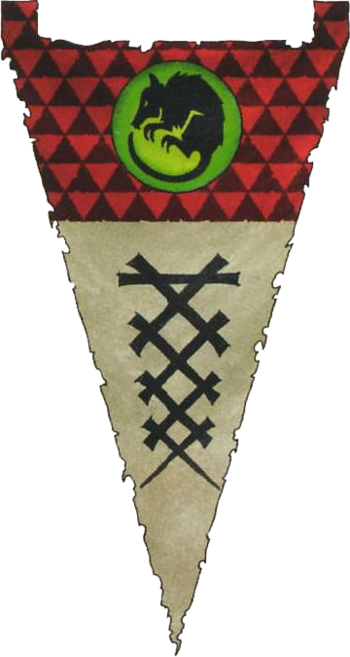 Clan Moulder specializes in the creation of monsters and living weapons, performing horrific experiments on captive creatures and intelligent prisoners alike within their fortress of Hell Pit in the far north. Through creative use of warpstone salves, grotesque surgeries, obscene cross-breeding and the channeling of the powers of Chaos into living flesh, the master mutators of Clan Moulder have produced a vast array of monsters, from swarms of giant rats and the reliable mainstay of rat ogres to the colossal, writhing Hell Pit Abominations, which they either use in their own armies or sell to other Skaven as bodyguards, attack animals or weapons of war. There is always demand for Moulder's grisly products, and this has made the clan one of the wealthiest in the Under-Empire. The symbols of Clan Moulder are twofold, comprising both a rat shrouded in green glow and a crisscrossing set of lines in the shape of a spine. 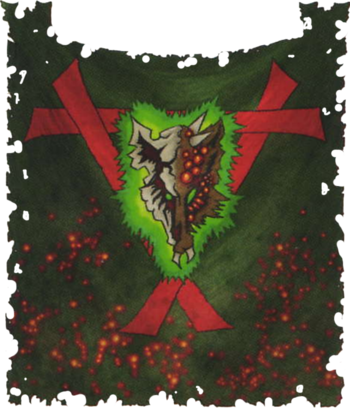 The origins of Clan Pestilens lie in an ancient Skaven expedition to Lustria that was all but wiped out by tropical diseases and furious Lizardmen, and whose few survivors embraced the same diseases that plagued them as a sign of divine favor. Clan Pestilens' monomaniacal devotion to plague and to the Horned Rat, whom they revere in his aspect of the Lord of the Decay, makes other Skaven factions intensely wary of them. Despite that, their many successes in using disease to harrow and destroy other races have won the Skaven many victories, and Pestilens remains a very powerful clan. The symbol of Clan Pestilens is a diseased rat's head superimposed on the Horned Rat's symbol upon a green field. 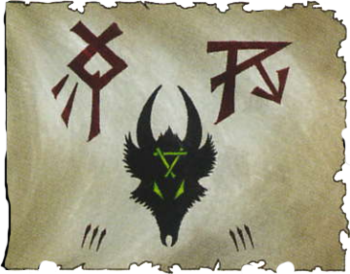 The Warlock-Engineers of Clan Skryre are the driving force behind the Skaven's advanced technology, which they create through endless experimentation with warpstone, sorcery and technological mechanisms. The weapons created as a result of Clan Skryre's work tend to be deadly beyond anything the other races possess, but also extremely unstable and prone to devastating malfunctions. To the Skaven, however, friendly fire and the loss of low-ranking weapons crews aren't particularly grievous issues, and Skryre's creations have become mainstays of larger Skaven armies. The symbol of Clan Skryre is a horned Skaven head, with the symbol of the Great Horned Rat upon its forehead.

Beneath the four Great Clans are hundreds of lesser warlord clans, who constantly rise and fall as their fortunes change. Most are minor powers, holding onto specialized niches or specific territories or thralls under a greater clan's thumb, but a few have risen to become formidable powers in their own right.

The Scheming Lords of the Under-Empire

Skreech Verminking
The greatest of the Verminlords, Skreech Verminking was created in the moment of Nagash’s first death millennia ago. Since then he has plotted and schemed to see the Skaven ascend to power and conquer the world from below.
Thanquol & Boneripper 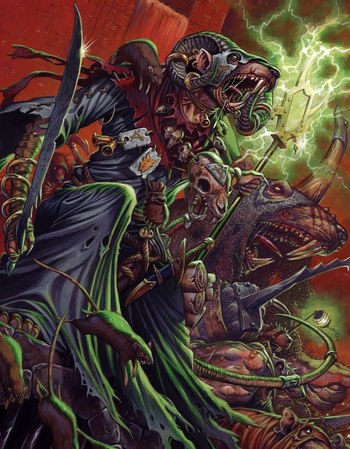 A powerful and ambitious Grey Seer and a favored agent of the Council of Thirteen. Although a talented sorcerer, Thanquol is also a General Failure whose every plan failed in part because of Gotrek & Felix but also his own incompetence. The only reason he's survived is that so far, he's managed to deflect the blame onto someone else. Thanquol is always accompanied by a bodyguard, a Rat Ogre which he names Boneripper, and there have been quite a few Bonerippers in his life.

Lord Skrolk
"Brother-under-the-fur. Ha! Now you are brother-true. Reject false-words of seers and embrace true face of the Horned One! Bring Skrolk to the Wormstone, and you will be plague priest. Betray, and you become pus-bag."
—Lord Skrolk talking to a prospective Plague Priest. 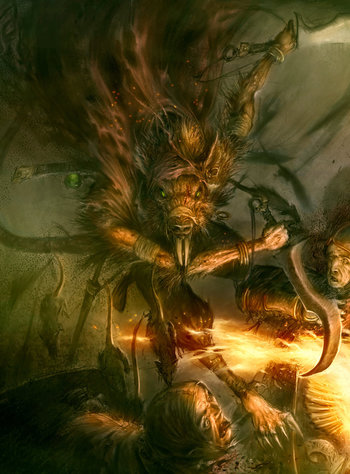 Deathmaster Snikch is the deadliest assassin of Clan Eshin, and widely feared among the Skaven. 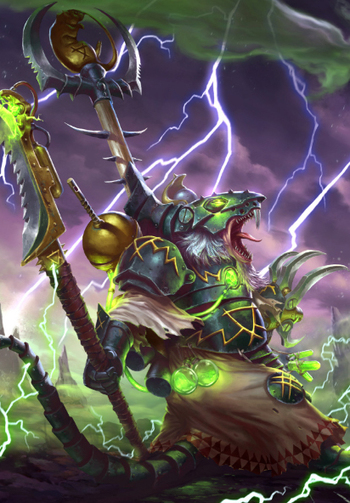 The greatest warlock-engineer of Clan Skryre. After a disastrous experiment, he's been forced to encase himself in an armor of his making.

Throt the Unclean
Throt is one of the Master Mutators of Clan Moulder. Terrifyingly huge and fat, he's among the foremost creators of the Hellpit Abomination among other twisted mutants of his creation.
Queek Headtaker 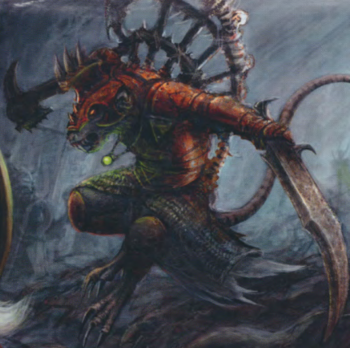 "Who is Queek? Queek is warlord here, not grey ones from far away. He claim he come from Council. He claims his good intent, but Queek is not stupid-slow, Queek know grey seers and their treacherous ways. White-fur will never be warlord here! He is never free of Queek's sight. Queek sees him always."

Second most senior warlord in Clan Mors, with his patron and superior being a member of the Council of Thirteen. Is noted for his vicious temper and being responsible for controlling the Skaven territory in Karak Eight Peaks when not leading Skaven to war elsewhere. This has ensured he has an enduring hatred for Dwarfs and Greenskins.