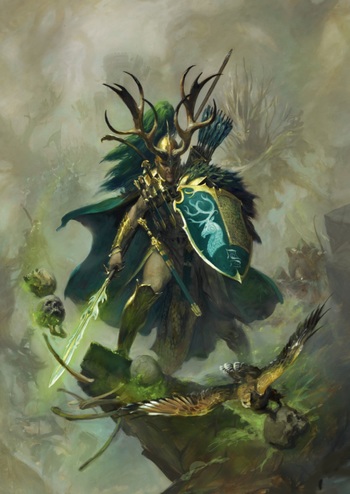 Don't Go Into the Woods
"Athel Loren shall not suffer the presence of Men, nor Orcs, nor Dwarfs, nor Beastmen. If a foe takes a single step upon such sacred soil, they shall not take another."
— Scarloc, Mist Walker of Athel Loren
Advertisement:

The Wood Elves, or Asrai as they call themselves, are an insular faction of Elves residing in the forest of Athel Loren located between Bretonnia and the Gray Mountains. Once, the Elves had colonized the Old World but then the Phoenix King Caradryel ordered that all Elves return to Ulthuan to fight the Dark Elves. However, some Elves were too attached to their new homes and hid in the forests, finding another shelter beneath the shades of the leaves. Since then, they have become the protectors of Athel Loren, living a strained but stable alliance with the spirits of the forest and its native fauna. Abandoning most of their former refinement, the Wood Elves have become closer to nature and taken to more "primitive" ways. Although they may be sneered at as savages, the Asrai are no less redoubtable than their brethren. Their eternal rulers are Ariel and Orion, Queen and King of the forest respectively.

The Wood Elves are a highly specialized army of extremely maneuverable long range fighters that are expert in the bow, but equally fragile as their armor is rare and toughness lacking in most units. Most Wood Elves units are best used to move around, harassing and outflanking the enemy. All of that is preferably while in the forests. Lacking war machines, the Wood Elves fight alongside their powerful magic users who can use the eight base lores but also High and Dark Magic, the beasts of Athel Loren and above all the animated trees of the forest.

Isolated in their forest, the Wood Elves are fairly uninterested in the outside world and ignore almost everyone, as long as the outsiders stay away from their lands. While the High Elves see themselves as masters of the world's fate and the Dark Elves see the world as their playground with no regard for what came before them or what will come after them, the Wood Elves believe that the world's fate has already been decided; Chaos is going to engulf the world in darkness except for Athel Loren, spared by the machinations of Ariel, leaving the Asrai as the sole remaining inhabitants of the mortal plane. Athel Loren is constantly besieged by Daemons and Beastmen and thus they have become the Asrai's greatest enemies. However, the Great Hunt regularly wanders outside of Athel Loren to prey on humans.

The Skillful Protectors of Athel Loren

Orion, the King in the Woods 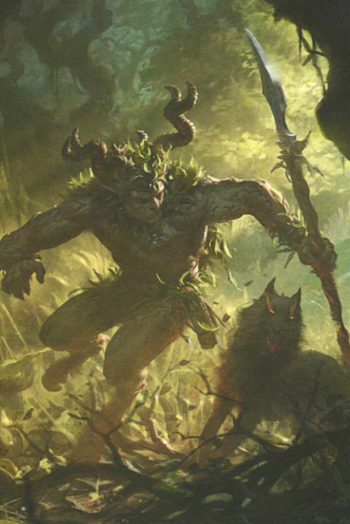 The king of Athel Loren and avatar of Kurnous, the elven god of the hunt. 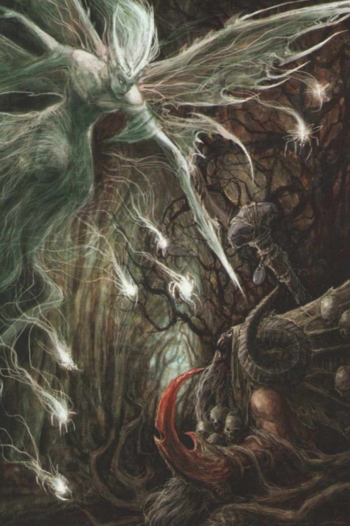 Ariel is the Queen of Athel Loren, and an avatar of the elven god Isha. She provides leadership and wisdom in times of peace, though she can be roused for war sometimes. 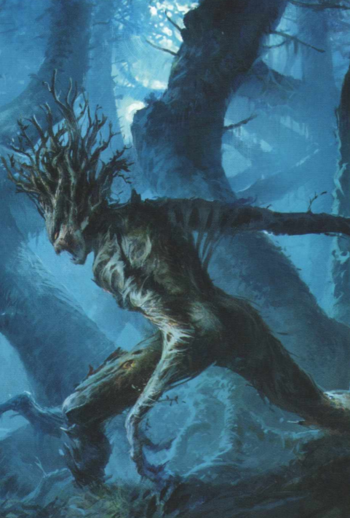 A vicious, xenophobic branchwraith and one of the oldest spirits in Athel Loren. She dislikes the elves and views their presence as an intrusion, secretly conspiring to drive them out. 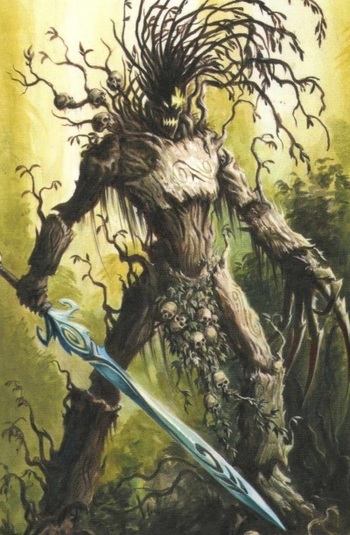 Durthu, or Oakheart as the Elves call him, is the eldest living forest spirit in Athel Loren. Once a wise and benevolent force, it was Durthu who originally spoke in favor of allowing the elves to dwell in the forest. Millennia of war and death however have soured his view of mortal beings, even the Asrai; now viewing them merely as allies of convenience at best. 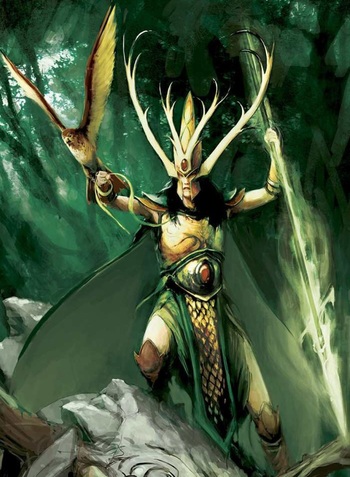 Araloth was once a cowardly noble who would only hunt beasts that didn't threaten him. However, after saving the goddess Lileath from a Daemon, Araloth awakened his courage and became Lord of Talsyn, as well as one of the most audacious and celebrated heroes of Athel Loren.

The Sisters of Twilight

Naestra and Arahan, the Sisters of Twilight 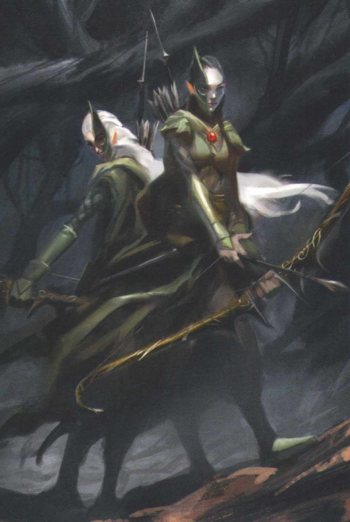 Mysterious twin elven heroes who are complete opposites, the Sisters of Twilight come to the rescue of Athel Loren and the Wood Elves. Unknown to most, they're Ariel's daughters with Orion. 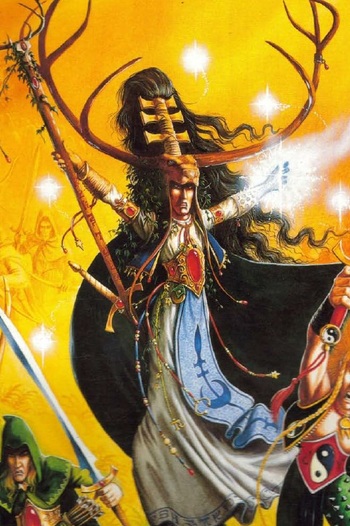 A Wood Elf mage who specializes in detecting and drawing upon deep currents of magic to strengthen and establish to magical wards around Athel Loren, and in monitoring these wards to detect the presence and nature of incursions.

Coeddil
Coeddil was one of the three great Treeman Elders of Athel Loren when the elven refugees came to shelter within it. He was always distrustful of the elves and opposed their arrival, but it was not until he was tainted by the blood of Morghur the Corruptor during the Battle of Anguish that he truly fell into hatred and evil. He eventually attempted to kill Orion during the King in the Wood's winter quiescence, but was stopped by Airel and imprisoned within the wildwood prison of Cythral where he remains to this day.