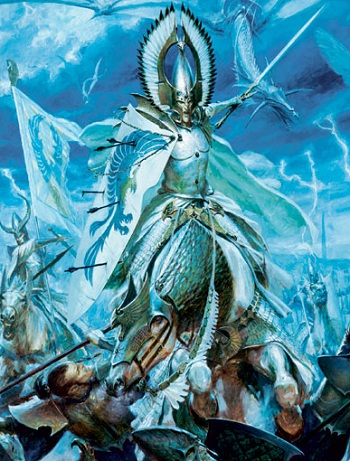 "We are the chosen of Asuryan, beloved of the gods and heirs to the world. Our armies are the finest in creation; swift where our foes are lumbering, cultured where they are barbaric. Give no thought to failure, nor defeat – we are the Children of Ulthuan and we shall prevail."
Phoenix King Aenarion the Defender
Advertisement:

The High Elves, Asur or Annulii, are one of the Elder races created by the Old Ones. Isolated from the rest of the world, the High Elves mainly reside in the continent of Ulthuan, dividing their people into ten great kingdoms. Long-lived (more so than dwarfs), refined and having a strong affinity with magic but with haughty hearts, the High Elves' history is marked by numerous tragedies, fratricide wars and an unending fight to quell the forces of Chaos ever since the Great Chaos invasion. As such they are a dwindling race contemplating the ruins of better times. Their current ruler is the Phoenix King Finubar the Seafarer but its foremost champions are the twins Tyrion and Teclis.

The High Elves are the very definition of the Elite Army. What they lack in number they compensate in quality, fielding highly trained units of infantry or cavalry, from the humble militias to the Phoenix Guard, Swordsmasters of Hoeth, or Dragon Princes of Caledor (although they mostly ride horses nowadays), most of which lack toughness but strike fast and true. Around these units the High Elves make ample use of Mages whose mastery of the Winds of Magic is supreme on the battlefield. They can also call upon powerful monsters such as Phoenixes or mighty Dragons for help.

Having taken it upon themselves to protect the world, the Elves siphon the Winds of Magic out of the world to prevent the Daemons of Chaos from invading again. However, it can be said that their archenemies are the Dark Elves, corrupted and cruel reflections of themselves bent on invading Ulthuan. Arrogant as they are, the High Elves keep few relations with the other forces of Order, but will fight with them if need be. 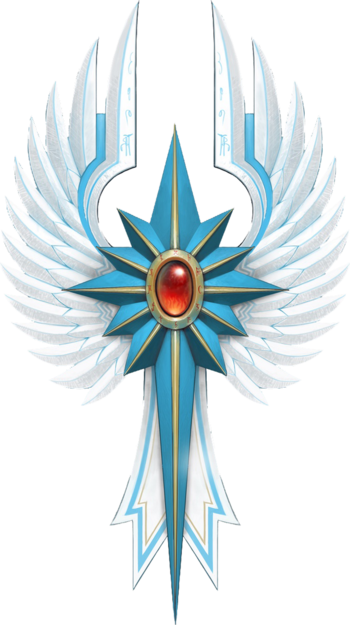 The Northstar of Ulthuan, one of the main symbols of the High Elves.
Advertisement:

The Illustrious Defenders of Ulthuan 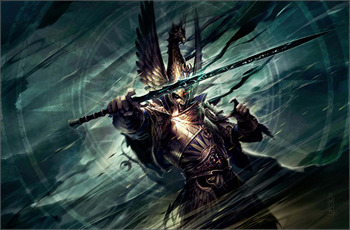 Champion of Ulthuan
"Our beautiful land is besieged on all sides, but we resist the like our fathers did before us. We will emerge victorious and more intractable than ever to these turbulent times when our corrupt brothers come to ravage our shores. We are the Asur, the son of Aenarion and Ulthuan shall never fall."

The Defender of Ulthuan and Champion of the Everqueen, Prince Tyrion is widely regarded as the High Elves' greatest living warrior, with some claiming him to be Aenarion the Defender reborn.

Teclis of the White Tower

The Sharp Tongued Mage
"The Realms of Man must not fall. Our fate is intertwined with theirs, and if they fall, so too do we. For this reason, I taught their first masters of magic, and for this reason, we must not abandon Men, despite their barbarous ways."

Twin brother of Tyrion. Teclis, caustic-tongued and frail-bodied, is perhaps the mightiest mage amongst all of the High Elves, founder of the Imperial Colleges of Magic after the Great War Against Chaos. 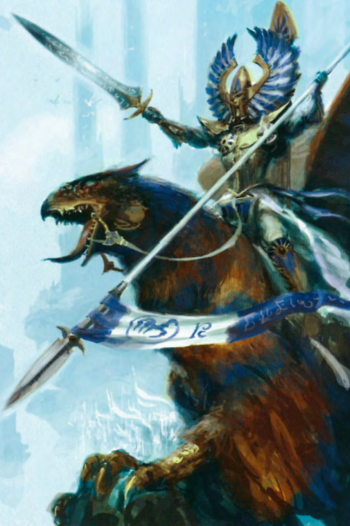 Tor Yvresse will never fall while I live!

Warden of Tor Yvresse, Eltharion is the lord of that domain, responsible for hurling back the Waaagh! of the infamous Goblin Warlord known as Grom the Paunch, and commands respect as the first Elven general ever to take the High Elves to war against the Dark Elves in their own territory, leading the first war on Naggaroth itself.

Alarielle the Radiant, Everqueen of Ulthuan 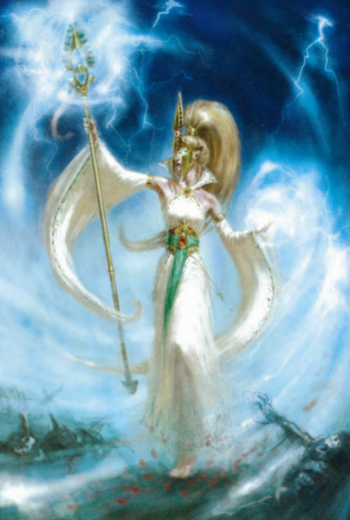 The current Everqueen and high priestess of Isha, and normally runs the civilian and cultural parts of Ulthuan society. However, in recent times she has been taking to the battlefield, something that is regarded as a terrible omen. 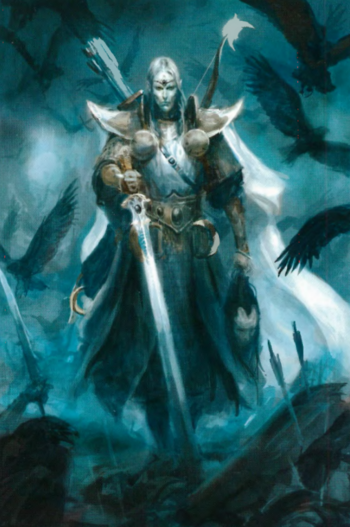 "By what right do you enter these lands without the permission of Alith Anar, lord of house Anar, Shadow King of Nagarythe? If you come to treat with me, hear my oath to the dead. Nothing is forgotten, nothing is forgiven!"

The last king of Nagarythe, the former homeland of the Dark Elves, it was Alith Anar who was chosen to lead his people after Malekith the Accursed fled to the west. Driven by his hatred of the Druchii, the Shadow King led a brutal war of vengeance against those Dark Elves who dared to remain in Nagarythe, culminating in the famous Battle of Griffon Pass, where seven hundred Druchii were captured alive and then nailed to the white cliffs high above the pass until their bones rotted and fell to litter the pass's floor. 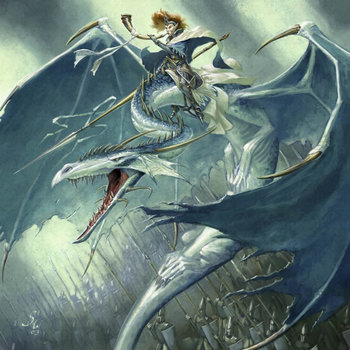 "I walk through the dreaming halls and I feel the change in the wind, the rhythm of their slumber. I see omens, Minaithnir tells me that he too feels his brethren swimming towards consciousness. I dwell in hope and I dwell in fear. Hope, that my dragon brothers and sisters shall shake off their grand slumber to rise again and that once more all the lords of Caledor will ride to battle on the backs of dragons as of old. And fear, that if we do, when we do it will be our last ride."

Prince Imrik is sprung from one of the noblest lines of Ulthuan. His blood is that of kings, and that of Caledor Dragontamer — the very greatest of heroes. Yet Imrik is also the last of his line; though he knows it not, his fate is intertwined with that of his entire race. 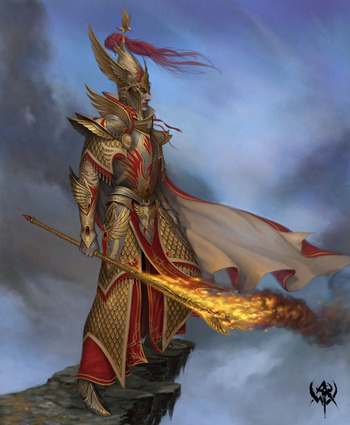 Prince of Eataine and latest in the line of the Phoenix Kings.

Korhil, Captain of the White Lions 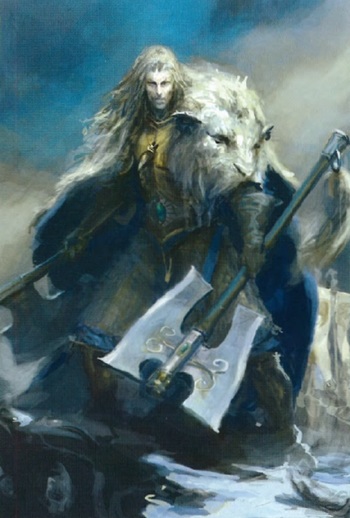 The current Captain of the White Lions. Korhil earned fame when as a youth, he sought and slew the mighty Chracian white lion known as Charandis, a mutant that had slain dozens of previous hunters. This caused him to be one of the youngest elves ever to be accepted into the ranks of the White Lions.

Caradryan, Captain of the Phoenix Guard 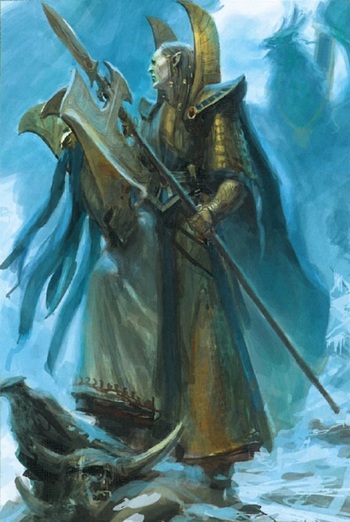 The current Captain of the Phoenix Guard, said to have the keenest senses of any elf ever. Rides into battle atop his faithful Phoenix, Ashtari, a bond that has lasted long enough that the Phoenix has cooled into a Frostheart Phoenix. 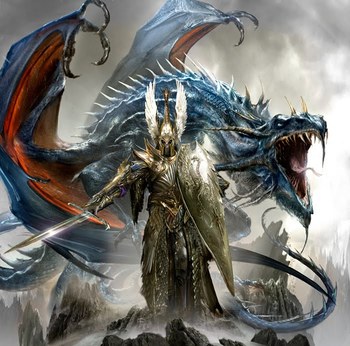 "Upon the isle beneath the fight, wise mages cast their spells And Daemon minions howled in anguish, cursed to eternal hell. And on this day we bow our heads to he who world did save, Aenarion the Proud Defender, Aenarion Ever Brave."

The greatest Elf warrior who ever lived and the first Phoenix King.

A Prince of Tiranoc, Bel Shanaar was a distinguished hero in the War against Chaos and became the first Elf elected to the Phoenix Crown.

Caledor I the Conqueror 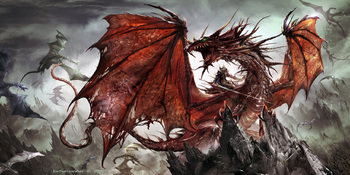 A Prince of Caledor, Caledor I was elected Phoenix King when the civil war with the Dark Elves first broke out and oversaw The Sundering, the event that saw the Dark Elves abandon Ulthuan and the ruin of Nagarythe. 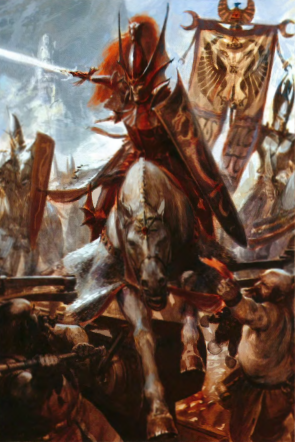 The son and heir of Caledor the conqueror. Caledor the Second, called the Warrior, was elected Phoenix King after the former's death in the hope that he would prove a worthy successor to his famous father. Unfortunately, it swiftly became apparent that the younger Caledor possessed few of his father's virtues, save martial prowess. Arrogant, pompous and lazy, Caledor preferred to spend his days engaged in leisurely pursuits than actually bothering to rule his kingdom. His most notorious act was sparking the War of Vengeance by shaving the beards of a group of Dwarfen ambassadors, an act which was later compounded further when he personally slew prince Snorri Halfhand, the son of then Dwarfen High King Gortek Starbreaker, in single combat. Ultimately, Caledor met his end at the climax of the war, slain in combat with Gotrek Starbreaker.

A Prince of Yvresse, Caradryel was chosen to succeed Caledor II following the latter's death and the Fourth Council. With the Dark Elves invading Ulthuan, Caradryel ordered the recall of all forces from the colonies, effectively abandoning the colonies in the Old World. He also initiated a system of rotating forces to the border fortresses of Ulthuan, ensuring a regular garrison that would always be fresh and near to full strength.

A Prince of Caledor, Tethlis was chosen by the Fifth Council to succeed Caradryel as Phoenix King, while the wars with the Dark Elves continued to rage. Tethlis had already distinguished himself as a great general, having lifted the siege of the fortress of Griffon Gate. He had also learned the value of preparation and organisation from his predecessor, and his reign saw a painstaking series of military reforms. His wars with the Dark Elves proved to be largely successful, driving the Dark Elves out of Ulthuan and crippling them for over a millennium.

Chosen to succeed Tethlis, Bel-Korhadris of Saphery oversaw the reconstruction of various towns and cities destroyed during the Dark Elf invasions. He also oversaw the hunting of the various monsters of the Annulii Mountains that saw Tethlis's wars as an opportunity to prey on undefended settlements. Perhaps his greatest contribution, however, would be the construction of the White Tower of Hoeth and the founding of the Order of Loremasters.

A prince of Saphery, Aethis's reign led to the creation of many great artistic works, from creation plays to animated portraits to a five hundred feet tall Griffon being carved from the mountain above the Griffon Gate fortress. Aethis's reign was a time of complacency, with martial pursuits forgotten and cast aside.

The High Loremaster of Hoeth during Aethis's reign, Morvael of Yvresse was chosen by the Eighth Council to succeed the assassinated Phoenix King. With the threat of the Dark Elves returned, Morvael immediately ordered an attack on Naggaroth, to disastrous effect. Following the subsequent Dark Elf invasion of Ulthuan, Morvael appointed Mentheus of Caledor, on whom he came to depend upon for his counsel and friendship to lead his armies, which he replenished by organising a system of troop levies which still exists to this day, all the while hunting down Dark Elf spies and devotees of the Cult of Pleasure.

Chosen by the Ninth Council to succeed Morvael, Bel-Hathor of Saphery oversaw the reconstruction of Ulthuan's infrastructure following the Dark Elf invasions. His reign also led to alliances made with the Bretonnians and the Sigmarite Empire.