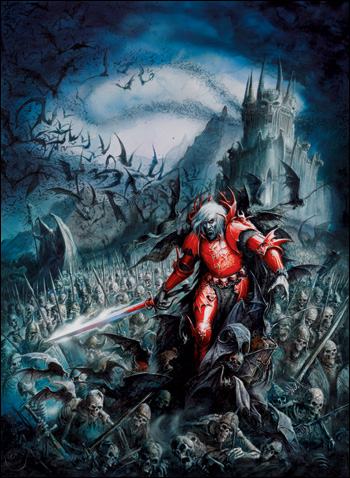 "Awake O Dead, for there can be no rest for ye beneath the earth. Let the splintered bones burrow from the grave pall. Let cold fingers grip time-worn blades, and unseeing eyes survey the fields of slaughter. For your time has come once more. And the dead shall walk again."

The Vampires are powerful undead humans characterized by superhuman strength, speed, and an affinity for necromantic magic in exchange for an eternity of damnation and hunger for blood. First created in Nehekhara when Queen Neferata studied the Nine Books of Nagash to become immortal, the Vampires have since that time dispersed around the world, forming dynasties with their own distinct characteristics but all sharing a unnatural control over the world's dead. These dynasties raise the dead into armies and eternal ambition drives them to try wars of conquest during which they unleash hordes of undead against the living. The most notorious bloodline of them all are the Von Carsteins, masters of the cursed province of Sylvania South-East of the Empire.

The Vampire Counts field an unconventional army made of undead centered around the General (either a Vampire or a Necromancer) whose presence is key to keep the dead animate and moving. The army lacks shooting options and is based around hordes of mediocre undead soldiers supported by more powerful units, either fast beasts bound to the general's will, more powerful kinds of undead soldiers or monsters and terrifying undead constructs. With the ability to replenish their ranks, the omnipresent Fear rule, an array of tricks, and general maneuverability, the Vampire Counts tend to outlast their opponents in a bloody grind rather than outperforming the enemy troops.

The Vampire Counts have a complex relationship with the other factions: they would dearly love to see the world eclipsed in darkness forever — but they would hate to have to share any of it with their vampiric fellows. They have fought grand wars to destroy the Empire — and yet, when the Skaven had overrun its cities or when the forces of Chaos finally ran rampant throughout the Empire's homeland, it was the armies of the Vampire counts that saved the Empire in its moments of direst need.

"If there be Gods, then they must smile to see their gifts so well used. If there are not, then I am surely the closest thing to them. Life and death are mine to deal, to those whom I consider worthy of each."
Lady Sigismunda, Blood Dragon

The knights of Blood Keep are the most driven and martial of the vampire bloodlines. The Blood Dragons devote their undeaths to becoming the deadliest warriors in the Old World in pursuit of their order's shared goal — slaking their thirst on a dragon's blood and transcending the limitations of vampirism. They descend from Abhorash the Blade Immortal, a legendary warrior of ancient Lahmia.

The Lahmians are almost exclusively female vampires who hide themselves within the upper echelons of human society, using talents for subterfuge and politics honed over centuries to stalk their prey within their own cities and halls of power. They descend from Queen Neferata herself.

The Necrarchs steep themselves in the study of dark magic to a greater degree than any other vampires, sustaining themselves on the wind of magic as much as they do on blood and often becoming necromancers of terrifying power. This practice, however, leaves them wasted and corpselike — no Necrarch would ever pass for a living man. They descend from W'soran the Wicked, high priest of Lahmia and one of Nagash's closest acolytes.

The Strigoi are bestial, degraded beings, and their hulking forms, batlike faces and taloned extremities prevent them from appearing as anything other than the inhuman predators they are. As a consequence, Strigoi usually lurk within ancient necropolises and haunted wildernesses, preying on wildlife and travelers and ruling over bands of primitive ghouls. They descend from Ushoran, Neferata's hated younger brother.

The von Carsteins are power-hungry tyrants and consummate aristocrats, brooding in dark castles and commanding legions of undead thralls. They view themselves as the rightful nobility of the night, cultivating themselves into noble or scholarly personas to present themselves with the dignity they feel due to their status, and openly rule over the nightmare lands of Sylvania. They descend from Vlad von Carstein, formerly Vashanesh of Nehekara and Neferata's first husband. 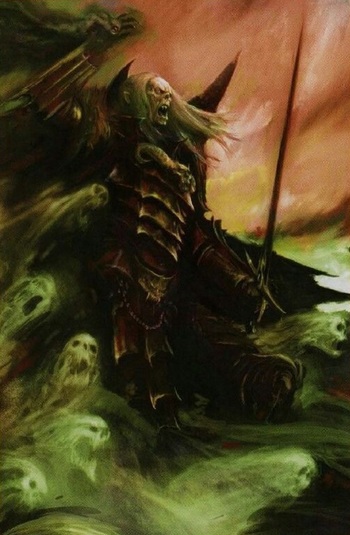 "Surrender and serve me in life, or die and slave for me in death."

The founder of the Von Carstein bloodline and the first Vampire Count of Sylvania. Undoubtedly one of the most infamous Vampires in the old world.

Vlad came to rule Sylvania several centuries before the setting of the game, and invaded the Empire in what would be known as the First Vampire War. Killed several times but always returning, his battle ended at the walls of Altdorf where a thief managed to steal the ring allowing Vlad to resurrect after his deaths and he was finally slain for good. 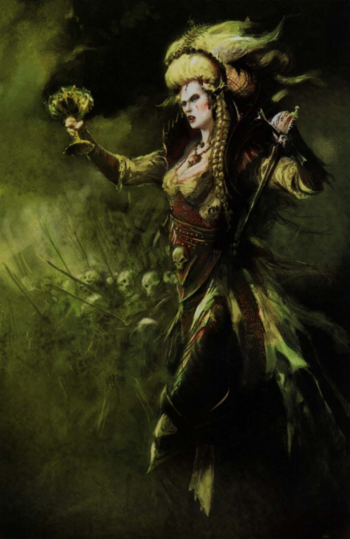 Undying love
"Please, come in and join me for dinner. I can see from the way you dress, you are a man of exquisite... taste."

The Countess of Sylvania, daughter of the "Mad Count" Otto von Drak. Vlad took her as a wife in order to claim the throne of Sylvania, and eventually genuine love grew between the pair. 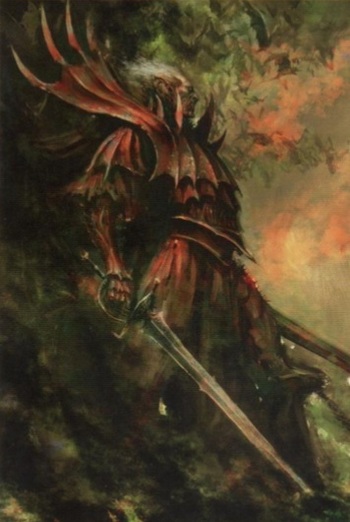 Completely sane.
"When the darkness falls our time is at hand. We are the rulers of the Night. We are the predators of the shadows. Come hither and we will show you the true meaning of terror!" 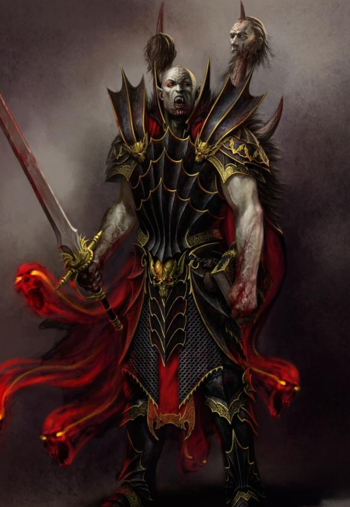 "This land is my home, my birthright. The wind and rain are my allies. The trees and stones are my foot soldiers. The very earth will rise up against you should you try to take it from me. And my people will feast on your bones."

The most ambitious of Vlad von Carstein's vampiric children and current ruler of Sylvania, an exceptional necromancer and perhaps one of the most powerful vampires in the world. 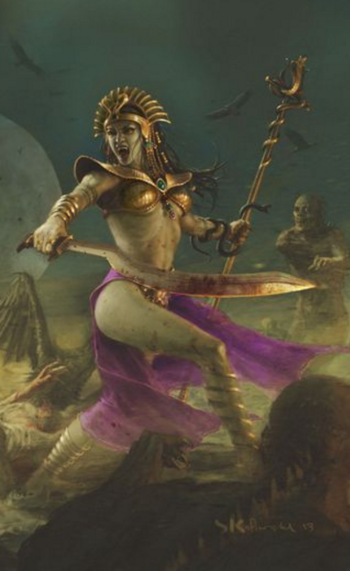 The one who started it all
"Behind every great man is a great woman. And behind those great women is me."

Queen of Lahmia, creator of vampirism and the first vampire, formerly known as Neferatem. She usurped control of a Dwarfhold, the Silver Pinnacle, and seeks to reclaim her ruined city. 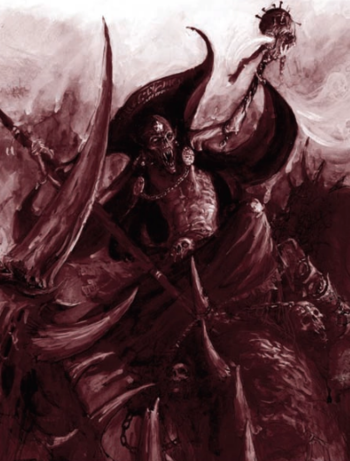 Little is known on the history of the Necrarch called Zacharias, but he is believed to have been a human necromancer who studied under the dreaded Dieter Helschnit before finding his way to the tower of Melkhior, one of the most powerful of all Necrachs and current keeper of one of the Nine Books of Nagash. Zacharias attempted to steal the book, but Melkhior awoke and caught the impertinent thief. Amused, Melkhior decided to turn Zacharias into a vampire rather than kill him. For years the initially-reluctant vampire studied under his mad master, keeping his unlife by continually impressing Melkhior with his keenness and his capacity to learn. Eventually, Melkhior returned from one of his mad fits, glutted on the blood of his former slaves, to discover that Zacharias had snuck into Melkhior's chamber and was busy reading the Book of Nagash. Forced to finally flee, Zacharias none the less escaped Melkhior's wrath, eventually creeping into the lair of a dragon, whom he drained of blood over a period of a month. Mounted atop the undead wyrm's back, he returned to Melkhior's lair and demolished it; Melkhior hasn't been seen since, with all his treasures and lore now belonging to Zacharias, the Everliving. 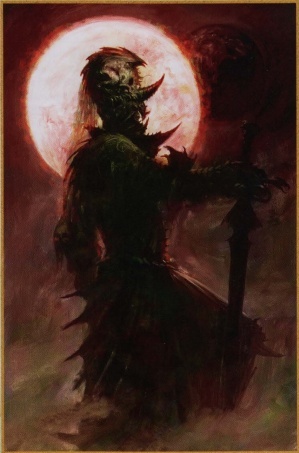 The first and greatest of the Blood Dragons. 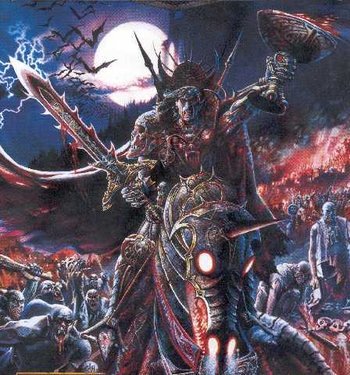 Grand Master of the Order of the Blood Dragons

Formerly Walak of the Harkoni tribe, Walach Harkon is one of Abhorash's disciples, and the Founder of the Blood Knights as a Vampiric Knightly Order.

Formerly Lutr of the tribe Harkoni, now a mad vampire pirate who rules the Vampire Coast of Lustria as its Pirate King. 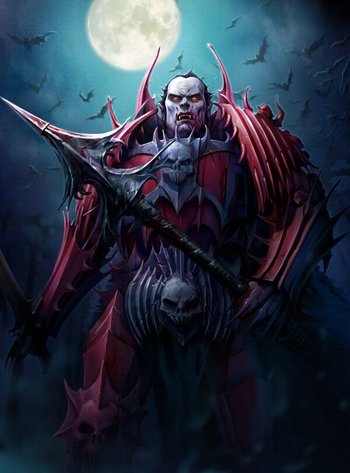 A former Duke of Aquitaine, now a monstrous knight waiting to prey upon the descendants of his people.

Ushoran
The first of the Strigoi vampires and Neferata's younger brother. 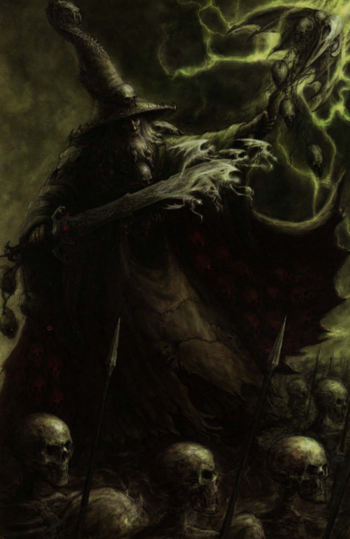 The Lichemaster, the most feared and terrible necromancer to still walk the earth as a living man, is beholden to the Gods of Chaos for restoring both his mind and unholy power, allowing him to raise the dreaded Krell as his minion. 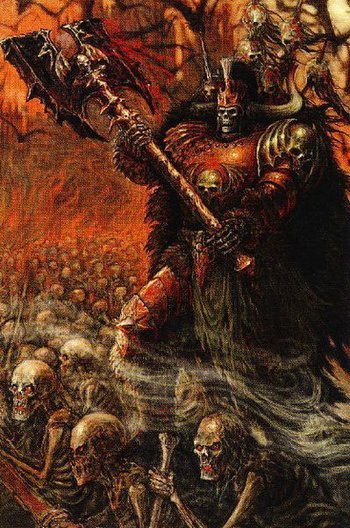 A mighty Champion of the Chaos God Khorne in the days before Sigmar, who fell during the battle of Karak Kadrin at the hands of the Dwarf hero Grimbul Ironhelm. Buried within a barrow, he was revived by Nagash himself some 1500 years later and became one of his most prized wight generals; when Nagash fell against Sigmar at the Battle of the River Reik, only Krell and his "Doomed Legion" of wights survived, hacking their way to freedom and butchering their way tirelessly across the land in an epic slaughter constantly retold to this day. Only at the Battle of Glacier Lake was Sigmar able to finally capture Krell and seal him away within a magical tomb, where he lay until he was once again resurrected by the necromancer Heinrich Kemmler.