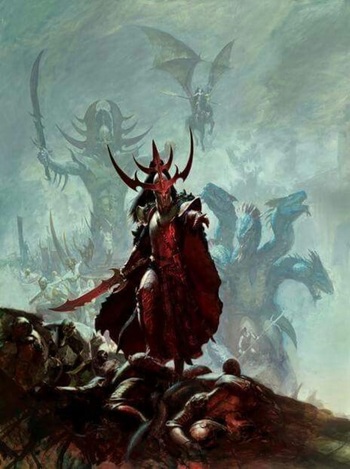 Death to the Asur!
"We shall strike down our foe with sharp steel and cold hearts. The weak die so that the strong shall be spared. Then and only then will our enemies know the true meaning of fear."
—Malekith, Witch King of Naggaroth
Advertisement:

The Dark Elves, or Druchii, are evil and cruel Elves descended from exiles who left the Elven homeland in the wake of the Sundering, the terrible ritual attempted at the height of the bloody Elven civil war that submerged much of their former territory in northern Ulthuan. Since going into exile, the Dark Elves have built their own cities in the desolate land that would become known as Naggaroth, the Land of Chill. From their grim realm, the Dark Elves raid the entire world for riches, slaves or both, building their forces so that they can one day return and reclaim their lost home. Their leader Malekith is actually the original leader of the losing faction and has kept himself alive and healthy for 5000 years by nefarious means, ruling over a vain, treacherous and bloodthirsty civilization of Elves ready to do anything to get what they want.

In battle, the Dark Elves form a twisted and more aggressive reflection of the High Elves. Also fielding elite units of fast but rather fragile infantry and cavalry, the Dark Elves swap the noble beasts for tamed monsters such as Hydras or Manticores, and their magic users practice Dark Magic. Moreover, the armies of Naggarythe incorporate more underhanded tricks such as assassins, and work alongside the bloodthirsty members of the Cult of Khaine, even more aggressive fighters reveling in close-quarter combat.

The Dark Elves have no allies, only prey. The lesser races of the world are treated as potential slaves, fit only to be worked to death for their masters. The Dark Elves reserve their greatest scorn for their High Elf cousins, who they believe to be weak usurpers who robbed them of their rightful homeland. 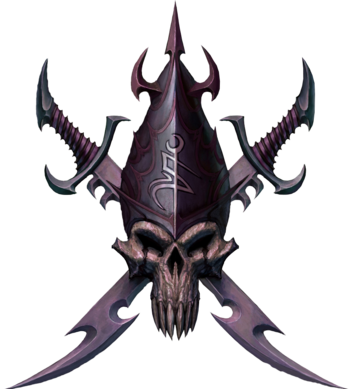 The Dreaded Tyrants of Naggaroth

Malekith, the Witch King of Naggaroth 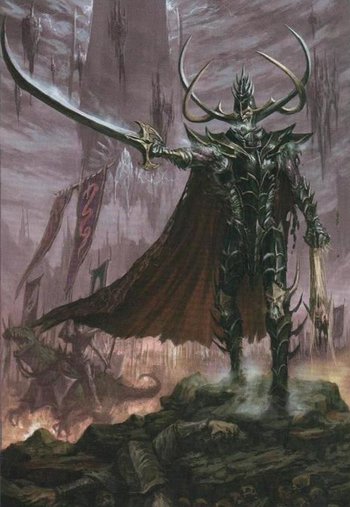 The Dark King
"Ulthuan belongs to me. If it takes a thousand years, ten thousand years, I will claim my rightful place as king. I am the son of Aenarion. It is my destiny."

Disgraced son of Aenarion, the first Phoenix King, and his second wife, Morathi, Malekith was once the heir to the throne of Ulthuan and was a key figure in founding the original alliance between Elves and Dwarves. But fear of his grim nature and what darkness he might have inherited from his parents, combined with politicing, resulted in another elven noble being given the throne. Though Malekith feigned satisfaction, resentment burned within him, and he took a long and bloody path that led to his murdering the second Phoenix King and trying to take his place. Rejected and horribly burned by the Flames of Asuryan, Malekith caused the fracture in elven society that created the three elven people today, eventually claiming the throne of Naggaroth as the immortal Witch King.

For more about Malekith, see his character page here. 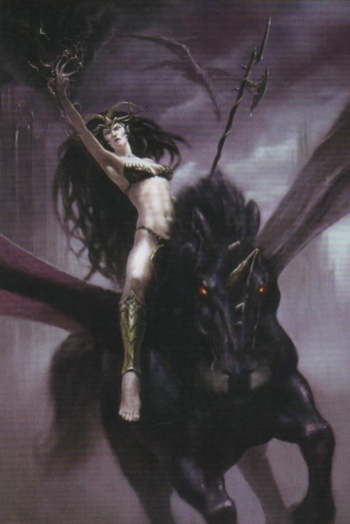 The Mother of the Druchii
"A scratch from an envenomed dagger, a sip from a poisoned chalice, a slight to a proud warrior's honour... In time these things may do far more grievous harm than the broadsword or the axe, my love..."

The mother of Malekith and second wife of Aenarion. One of the most powerful magic users in the world, Morathi is as twisted and manipulative as she is beautiful. 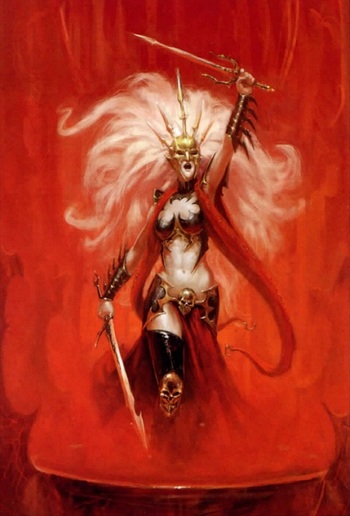 The Blood Queen
"Send the word out across the world. Celebrate and give thanks to the mighty Lord of Murder for delivering unto us his world-born son. We have been blessed and in His name we shall bare our blades in readiness for His will as voiced by His avatar. Hail Malekith, Eternal Khaine Incarnate."

The high priestess of the Cult of Khaine and a bitter rival to Morathi; Hellebron is so ancient that she can only attain any measure of her former beauty through her Blood Bath rituals. 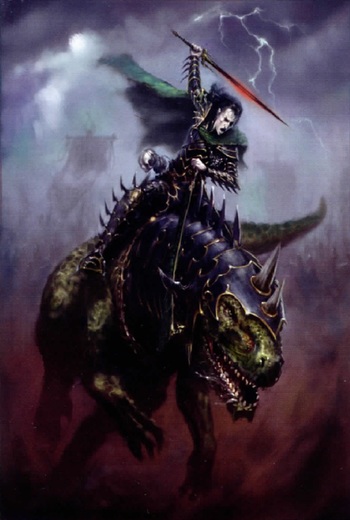 Through hate all things are possible, and my hate is strong.
"Shut up Daemon!"

An ambitious Dark Elf noble who foolishly released a daemon named Tz'arkan, which commanded him to bring forth five ancient relics of power and use them to fully release it, or have his soul be consumed. Malus succeeded against all odds, but found his soul stolen anyway when Tz'arkan was freed; enraged, he tracked the daemon down and reclaimed his soul, but found himself possessed by Tz'arkan again. 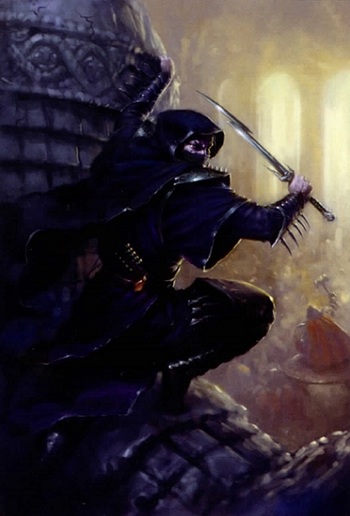 "Now look upon the face of death!"

The greatest of the Khainite Assassins and undoubtedly one of the deadliest killers Naggaroth has ever produced. It is said no one looks upon his face and lives. 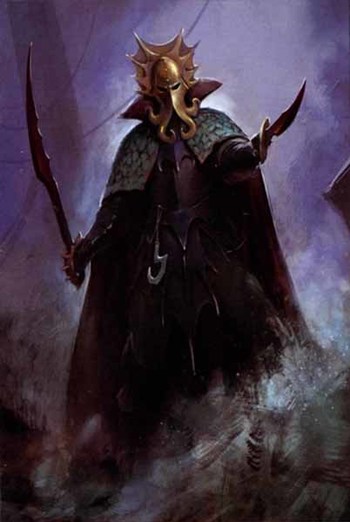 One of the most notorious of all dark elf corsairs, Lokhir Fellheart commands the black ark Tower of Blessed Dread and is a scourge of the seas the world over. 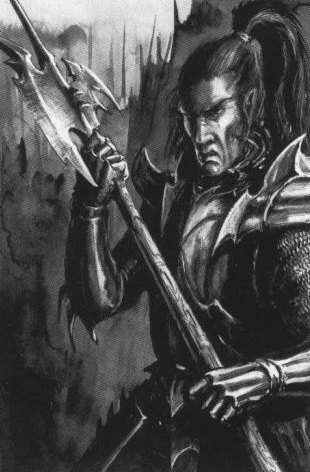 The Right Hand of Darkness
"You are the true king of the elves, Malekith. You are the son of Aenarion, champion of the Daemon War, heir to the Phoenix Crown. It is your right by deed, merit and birth and I would give my life to see that ancient wrong reversed and your rightful position restored. As an elf I can think of no higher calling."

The current captain of the Black Guard and Malekith's right hand man. Kouran is a true rarity among the Druchii in that he is genuinely loyal to Malekith and would gladly give his life in service to his lord. 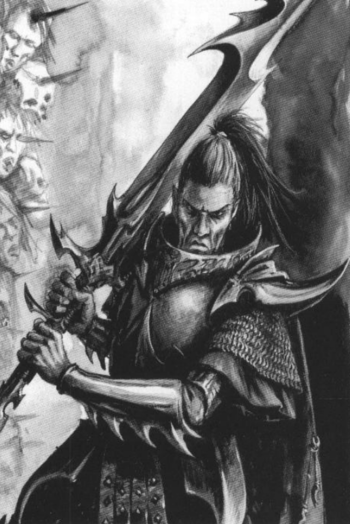 The Chosen of Khaine
"Lord Khaine. I send you this meagre offering, the first of many, on your night, Death Night. Let this be a sign of the compact between us, and lend your strength to me. Let the murders I commit this night be in your name and for your glory."

The current captain of the Har Ganeth Executioners, Tullaris is a fanatic who believes he has been chosen by Khaine himself to spill blood, a belief stemming from the constant visions and whisperings that plague him, enticing him to kill and main all around him.

A champion of Malekith. Urian Poisonblade was said to be the greatest swordsman the Druchii had produced in generations. He was sent to infiltrate Ulthuan in preparation for the Witch King's latest invasion and was eventually slain by Tyrion at the Battle of Finuval Plain.