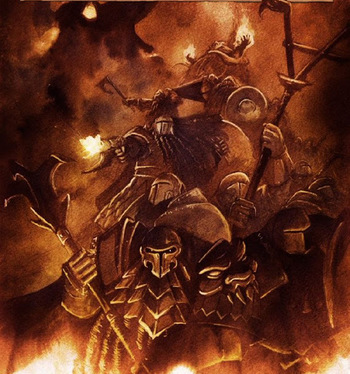 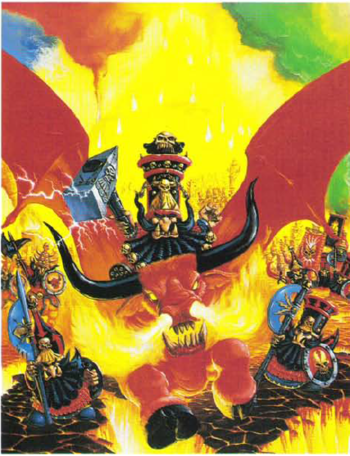 "Where was Grimnir when our warriors were dying? Where was Valaya when our children sickened? When we called out for aid in the deep places where we delved, it was not Grungni who answered our call, but mighty Hashut who delivered us in our time of need. Who are the real traitors here? Our kin who abandoned us to madness and death or we who only sought to survive against the forces of Chaos? One day there will be a reckoning and it will be the Sons of the Father of Darkness who will have the victory, not the weak willed spawn of the pathetic Ancestor Gods."

Long before Sigmar was born, even before the Great War of Vengeance, Dwarfen colonies existed as far east as the Mountains of Mourn. During the first incursion of Chaos in the world, these colonies were cut off from the Karaz Ankor, who assumed they were dead. But they had survived only by the intervention of Hashut, Lord of Darkness, a minor Chaos God of greed and tyranny. Abandoning the old ways, they reemerged as the Chaos Dwarfs, or the Dawi-Zharr in their tongue. Hashut not only saved them in their darkest hour, but granted them the ability to cast spells. However, because Dwarfs are not meant to wield magic, they slowly succumb to a curse that turns them to stone. Now they rule their cruel empire from their capital city of Zharr-Naggrund, a massive Ziggurat in the middle of the Dark Lands.

The Chaos Dwarfs were first introduced in White Dwarf Presents: Chaos Dwarfs, a supplement for the 4th Edition of the game. They eventually got a full-on army roster in 4th Edition, which was updated for 5th... before disappearing from the game except for a few token mentions in the lore. However, another supplement for 8th Edition called Tamurkhan: The Throne of Chaos featured a new Chaos Dwarf army called the Legions of Azgorh. They went through a bit of a redesign, as the two pictures to the right can attest to.

The Chaos Dwarfs have a vaguely Babylonian culture, trading the Nordic-style braided beards of their ancestors for tightly curled, "cord-like" facial hair instead. They make great use of chariots drawn by monstrous bulls. They also use blunderbusses and massive cannons. The Chaos Dwarfs are backed up by Orc and Goblin slaves, and their willing servants, the nefarious Hobgoblins. Their backlines are supported by insanely powerful warmachines and a wide variety of artillery. Finally, where all else fails, the Chaos Dwarfs can bring massive monsters to field including the hybrid Lammasu, the bull-like Great Taurus, the enslaved Chaos Siege Giants, and the artificial K'daai Fireborn and K'daai Destroyers. 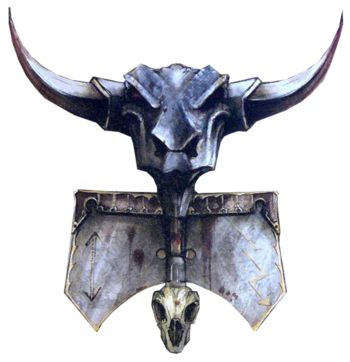 Hashut, the Father of Darkness, is the minor Chaos God of Fire, Greed and Tyranny and the Chaos Dwarfs' patron god. A grim and malignant being, often represented as a great blazing bull wreathed in smoke and shadow. Hashut is closely associated with tyranny, greed, fire and hatred, and it is a being whose gift of power comes at a terrible price.

As with much of their origins, just how the Dwarfs of the East came to seal their pact with Hashut remains shrouded in the dark times of the great sundering of the world by Chaos, and in truth the Chaos Dwarfs themselves may have only a dim and warped understanding of how they became bound to their nightmarish god. The twisted runic cartouches that adorn their fire-temples do however speak of the abandonment of the Dwarfs of Zorn Uzkul by their Ancestor Gods during the Great Cataclysm, their finding of salvation and succour with their new god, and the thirst of Hashut for sacrifice and subjugation in return for his patronage.

Over the centuries, in return for flesh and blood, homage and devotion, Hashut has gifted the Chaos Dwarfs with many things: malign secrets and powerful sorcery that fused with their mastery of industry and forgecraft to create many Daemon-fused machineries, monstrous engines of war, dominion over the fires of the earth, and arcane and malevolent lore that has brutalized their sanity and souls. The pact between the Chaos Dwarfs and their dark god has only deepened over time and grown to the point where the tendrils of Hashut's malevolence and the Chaos Dwarfs' own bitter souls have become one. 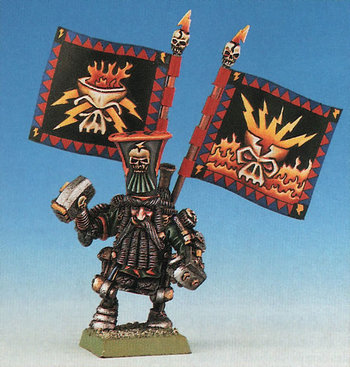 Astragoth Ironhand, High Priest of Hashut, is the oldest living Chaos Dwarf Sorcerer-Prophet. When he was at the height of his powers he was the most potent sorcerer to walk the Plain of Zharrduk in a thousand years. Now his powers have begun to wane and his body is slowly succumbing to petrification. To combat this, he constructed a mechanical device by which he is transported from place to place. 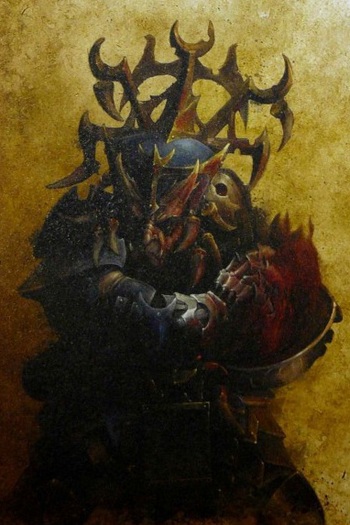 Lord of the Black Fortress
"Walls? I see only piles of sand crafted by children. Bring my brothers close enough and we shall take pleasure in fulfilling our bargain and topple them for you!"

Drazhoath, known as the Ashen, is the Lord of the Black Fortress and commander of the fell Legion of Azgorh. For more than a thousand years, the dark, burning spire of the Black Fortress has stood sentinel over the crossing place of the River Ruin at the southern edge of the Mountains of Mourn, and has guarded the border of the Chaos Dwarf empire of ash and suffering. It is a nightmarish place of soot, blackened iron and jagged rock, and burning magma runs through it like lifeblood. For centuries the master of this dark demesne and the warriors and slaves that inhabit it has been Drazhoath the Ashen, a twisted, power-hungry creature and potent sorcerer. Drazhoath was first sent to the Black Fortress in effective exile after losing favour in the brutal politics of Zharr-Naggrund as a minor hell smith but has since risen to become its lord through his innate cunning and bitter, ruthless ambition. 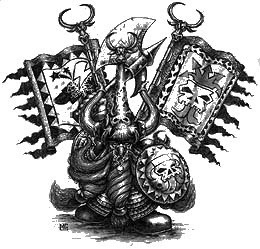 Zhatan the Black is the Chaos Dwarf Commander of the Tower of Zharr and a servant of Ghorth the Cruel.

Acts of the most cruel and heartless nature are everyday occurrences in the Plain of Zharrduk. Thousands of slaves endure unimaginable agonies in the pits of Zharr, mining out the poisonous wealth amidst choking fumes and impenetrable darkness. In the workshops of Zharr-Naggrund, untold slaves are worked to death in their chains so that their masters can enjoy a lifetime of ease. The Hobgoblin overseers in the Vale of Woe beat their pitiful charges so that their flesh hangs from their backs like bloodied rags. Even amongst such wanton cruelty there is one whose deeds of brutality are remarkable: Zhatan the Black, Commander of the Tower of Zharr.

Zhatan serves the Sorcerer-Prophet Ghorth the Cruel, most potent of all living Chaos Dwarf Sorcerers. It is said that when Ghorth presides over the sacrifices of Hashut the only sound louder than the screams of his victims is the gloating laughter of Zhatan, his general. Zhatan is kept busy by his master's insatiable demand for fresh slaves. The Chaos Dwarf has led many successful slaving expeditions to the west, crushing every Orc army that has dared to stand up to him. All the Goblin tribes between the Plains of Zharrduk and Mount Grimfang have bowed before his armies, sending thousands of their kind in tribute to the Lords of Zharr-Naggrund. The workshops and mines of Ghorth can scarcely keep pace with Zhatan's demand for weaponry. Every expedition he undertakes brings further slaves whose labours fuel fresh conquests.

Ghorth the Cruel is a Chaos Dwarf Sorcerer-Prophet, the second most potent of the coven and hence one of the strongest voices in the conclave of Sorcerers that gather in the Temple of Hashut. The commander of his armies is legendary Chaos Dwarf Lord Zhatan the Black. As a result of Zhatan's success in battle, Ghorth's workshops and forges can barely keep up with his demand for weapons and munitions.
Gorduz Backstabber 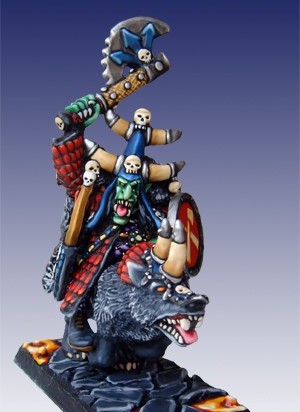 All fame is fleeting and all glory ultimately fades away. The renown of the Hobgoblin Chieftains tends to fade away more quickly than most, usually with the help of a dagger, poison or "nasty accident". Gorduz Backstabber has outlived most of the other tribal leaders thanks to a naturally distrustful disposition and lashings of low cunning. He has also been lucky, as the hardened scar tissue that criss-crosses his massive bony shoulder hump testifies.

Bazherak the Cruel, Commander of the Tower of Gorgoth

Legend has it that Bazherak the Cruel was an infamous castellan-commander of the Tower of Gorgoth during the wars against the Great Empire of Nehekhara at its height, long before Nagash doomed its people.