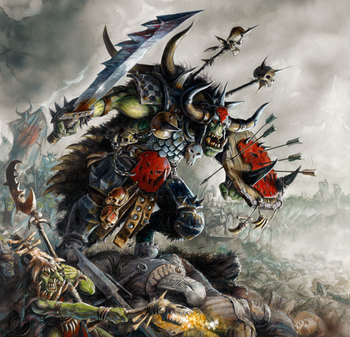 "Greenskins" is a general term used to call the various races of green-skinned barbarians who scourge the lands everywhere in the Warhammer world. The most prominent greenskins are the Orcs, warlike and diverse in their culture, and the cowardly and vicious Goblins. Orcs and Goblin tribes come in many varieties but they all share enormous numbers, natural aggressivity and the worship of their gods Gork and Mork. A good number of infamous Greenskin warleaders have made a name for themselves, most notably Skarsnik of the Crooked Moon Night Goblins and Grimgor Ironhide the Black Orc.

The Orcs and Goblin WAAAAGH! field a staggering variety of troops, reflecting their diversity in the lore. One constant is that they come in numbers and prefer to go into close-quarters combat, but are rather unreliable and undisciplined. Other than that, one may face different troops, from tough Orcs to the elite Black Orcs, the cowardly but underhanded Goblins, varied monsters over which they have shaky control and shoddily built war machines with great potential for both success and disaster.

The Orcs and Goblins have no real allies and only wish to bring destruction to the entire World. Nonetheless, Greenskins have little need for allies because of their numbers, and are too unruly to unite amongst themselves anyway, almost fighting among themselves as much as they fight the other races. 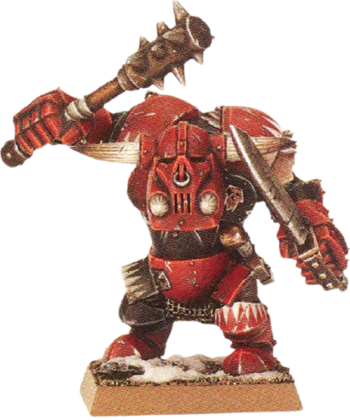 Black Orcs are the elites of the Orcish race, and are much larger, stronger and fiercer than their kin. In personality and outlook, they are in many ways the opposites of other Orcs — while your typical Greenskin horde is chaotic, undisciplined, shoddily equipped and prone to running when things turn sour, Black Orcs are disciplined, well-trained, clad head-to-toe in heavy armor and equipped with superior weapons, and extremely difficult to break. Luckily for everyone else, Black Orcs are very rare, and are much likelier to be found as leaders and small elite forces within the warbands of other greenskins. 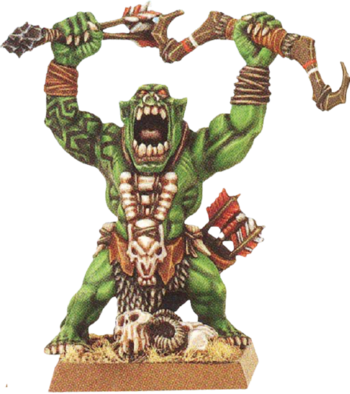 Savage Orcs are the most primitive and backwards of their already barbaric kindred. They chiefly live in the Badlands and the Southlands, where they follow the vast herds of boars that roam there. They do not make use of metal, instead relying on crude implements of wood, bone and rock, and are intensely superstitious, daubing themselves with patterns of warpaint that they believe will protect them from harm. 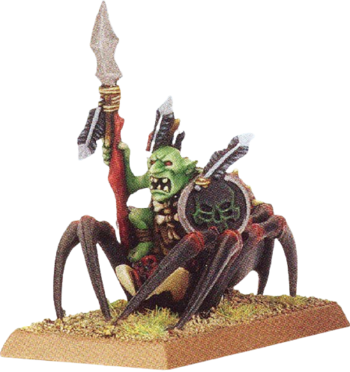 The ancient forests of the Old World are home to many terrible things, and among these are the countless tribes of the Forest Goblins. Forest Goblins lead secluded lives among the boughs and thickets of old-growth forests, living alongside colonies of monstrous spiders, and as many unfortunate loggers, hunters and villages have found are viciously protective of their territory. 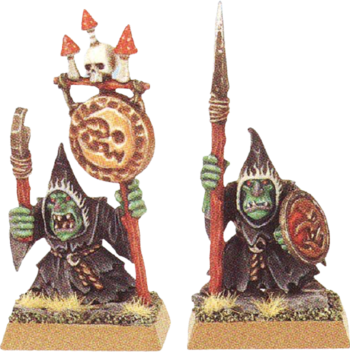 The Night Goblins make their homes deep below the surface of the world, lurking amongst the caves that run among the roots of the Old World's mountain ranges and in the ruins of ancient Dwarf holds. They loathe intense light, and when they must surface their cover themselves in dark, hooded cloaks. Their choice of habitat has made them enemies of Dwarf and Skaven alike, and the Night Goblins are forever warring against them for living space. 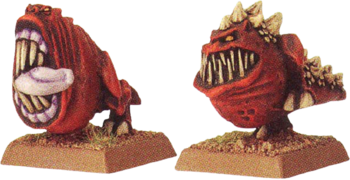 Squigs are strange, aggressive creatures that live deep beneath the mountains. Their bodies consist chiefly of large, round heads dominated by wide mouths bristling with teeth, and they're well-known for their terrible tempers, low intelligence and ravenous appetites. Despite their aggressive attitudes, Night Goblins have formed a sort of rapport with the creatures — while squigs are nothing like domesticated, the goblins have more or less learned the tricks of herding them into opposing armies and of riding them (for a given value of "riding") into battle.

Infamous WAAAGH-mongers among the Greenskins 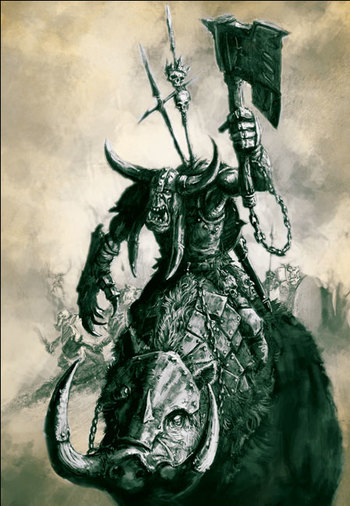 Perhaps the most infamous of all the Orc warbosses to have ever threatened the Old World. Having carved himself a huge army of Orcs by conquering different tribes in the Badlands, Gorbad launched perhaps the most disastrous Waaagh! in the history of the Old World in 1707 and would go on to scour the Empire, destroying Solland and stealing its Runefang. He even managed to reach Altdorf and slay the Emperor Sigismund, and afterwards headed for the Grey Mountains. Gorbad perhaps represented best the ideals of cunning and brutality among Orcs, being a great warrior and an even greater general. 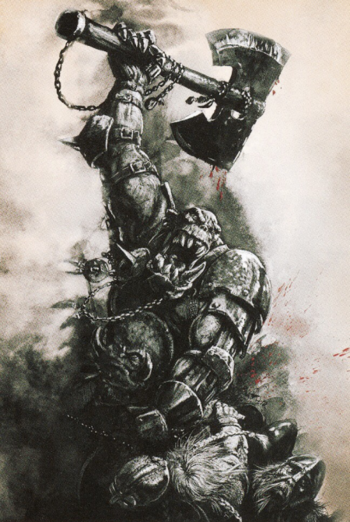 Grimgor is da Best!
"Everfing I see is mine. All da uvver bits are mine too — I just ain't got there yet. When we reach da end of da whole world, we'll turn around and march back."

A legendarily savage and belligerent Black Orc warboss often regarded as the greatest living orc. Grimgor lives to fight, and has scoured the Old World, going to the World's Edge Mountains to conquer other Orcs, having ravaged Clan Moulder's Hellpit and even defeating Archaon in single combat before being forced to retreat as he lost the greater battle. 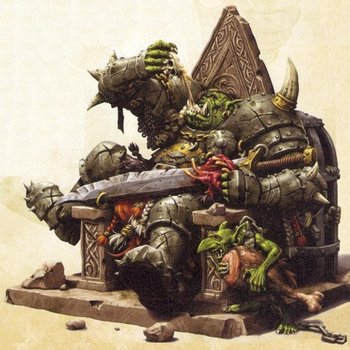 "Let it be known to all that on this day the blackest of marks is made against the squatter king of Black Crag. By the most heinous of urk treachery did he breach the forgotten ways of Karak Azul to perpetrate the most egregious of crimes against King Kazador and the dawi of the Iron Peak. No oaths, no deeds, no acts of vengeance shall ever efface this shame."

Gorfang Rotgut, also known as the Troll-Eater, is the chieftain of the Red Fang and Broken Toof tribes and the King of Black Crag, the former ancient Dwarf hold known originally as Karak Drazh. 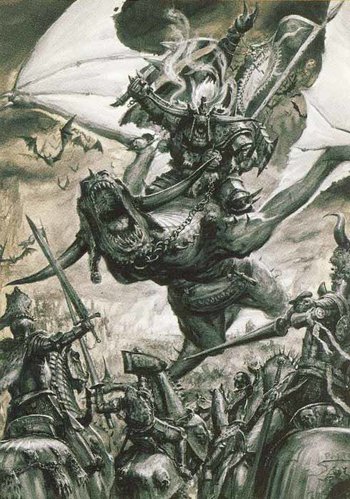 "Wyverns is good fer one thing, eatin' smashin' smellin' and flyin.' They're also good fer lettin' the other boyz know who's boss!"

An Orc warboss who led his army with unprecedented mystical might and tactical skill thanks to wearing the Crown of Sorcery, a relic once worn by Nagash himself. He would carve a bloody path in the Empire, only stopping when, in a moment of struggle between Azhag and the fragment of Nagash held within his crown, he was slain by a Grand Master. 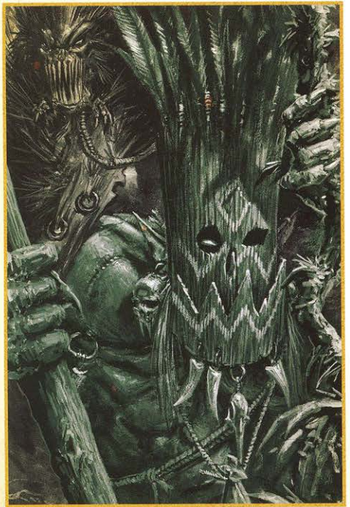 Grom the Paunch of Misty Mountain 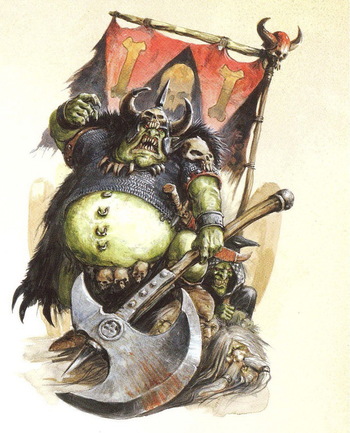 A legendarily bold, cunning and obese Goblin warlord who once besieged Ulthuan itself. Grom began as an ordinary Goblin who made a foolish bet, and that bet was to eat raw Troll flesh and live. Suffering agony as the piece kept regenerating inside of him, his body eventually reached a balance and Grom grew fat. Emboldened, Grom would become a feared Goblin Warboss who ravaged and pillaged a good chunk of the Empire then invaded Ulthuan, only to be slain at the battle of Tor Yvresse by Eltharion the Grim after months ensued of that bloody campaign. 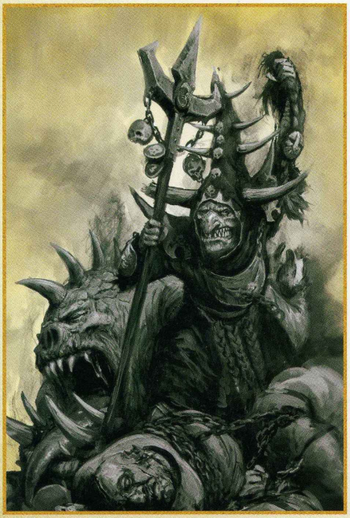 The Night Goblin warboss known as the Warlord of the Eight Peaks, Skarsnik rules over the ruined upper levels of Karak Eight Peaks despite internal dissension, attacks from below courtesy of the Skaven and the efforts of the Dwarfs to break free or rescue their trapped brethren. He does this with cunning, cruelty and the vicious protection of his pet Giant Cave Squig, Gobbla.

Snagla Grobspit
A legendary Forest Goblin chieftain, who roams the world with his loyal spider riders, offering his aid to any horde that will take him.
Gitilla da Hunter
A famous Goblin wolf rider.