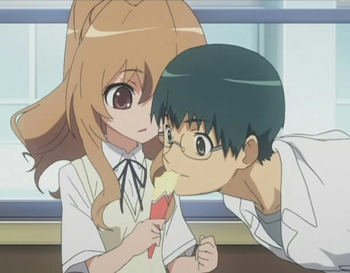 Whoa... they must be a couple!
Advertisement:

Dates and sweets go together. And in anime, at least, the sweet of choice for sweethearts is the crêpe: fried dough rather like a thin pancake, filled with ice cream or other fillings in the middle and various toppings and folded. For maximum Ship Tease, they'll take a bite of one another's crêpes, or even lick each other's crepes off each other's faces, thus completing an Indirect Kiss.

Compare to Sweetheart Sipping for the beverage version of this trope. Spaghetti Kiss is the common American (and slightly naughtier) variant. Despite the fruit's naturally sweet flavor, said crêpes rarely use dates as filling.

Absolutely no relation to Date Rape.