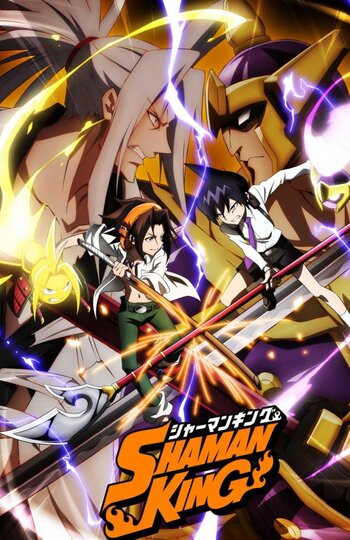 "Let there be light! Revive a soul!!"
Advertisement:

Shaman King is a manga series created by Hiroyuki Takei, also author of Butsu Zone. It was originally published from 1998 to 2004 in Weekly Shonen Jump.

In the world of Shaman King, special humans possessing spiritual power act as mediums between the worlds of the living and the dead. With enough talent and training, these humans can even channel a bonded soul to gain the powers and abilities they had in life, from legendary samurai to kung-fu masters.

Yoh Asakura is a Brilliant, but Lazy shaman who has bonded with a samurai spirit named Amidamaru. Together with his best friend Manta Oyamada, an Ordinary High-School Student with just enough power to see spirits, and his Tsundere "fiancée" Anna Kyouyama, Yoh dreams of becoming the Shaman King: The Chosen One able to channel The Great Spirit and reshape the world however he or she sees fit. To do this, he must win the Shaman Fight, a once-in-a-lifetime competition that will decide just who is the most powerful and worthy shaman in the world.

It's now gotten a re-release in Japan under the title of Shaman King Kang Zeng Bangnote a pun on Kanzenban, "complete edition" in which the actual ending was released over two more volumes. An English digital release of this edition was made available in 2020.

The manga ended after 300 chapters. There is a sequel called Shaman King: Flowers, which was started April 2012

but was discontinued until 2018 when it was revived as Shaman King The Super Star and a spin-off series, Shaman King Gaiden: Red Crimson. There's also the supplementary manga Shaman King Zero which tells short stories of the characters before the main one, and Shaman King Remix Track short stories in the reprinted edition of humorous nature.

Its anime adaptation, which was animated by Xebec and spans 64 episodes aired from July 4, 2001 to September 25, 2002 on TV Tokyo, was one of the many series dubbed into English by 4Kids. The Spanish and Latin Americans also got a translation, and had the Japanese original dubbed in Spanish with only a bit of Cultural Translation and pretty decent casts. Both the 4Kids dub and a local language dub were shown in the Philippines, leading to inevitable comparisons and some confusion.

A new anime adaptation produced by Bridge premiered on April 1, 2021 on TV Tokyo, and it consists of 52 episodes. The series streamed in Japan same-day on Netflix, while Hulu and Nico Nico Douga made it available the following week. Netflix also streamed the series worldwide beginning on August 9.

Not to be confused with the manhwa Shaman Warrior.

Yoh and Anna "Sleep Together"

The night before Yoh parted to America for the Shaman Tournament, Anna decides to sleep with him for fear that he'll die in the tournament. What started as an implication, it was later confirmed that they indeed had sex.

Example of:
Their First Time

Yoh and Anna "Sleep Together"

The night before Yoh parted to America for the Shaman Tournament, Anna decides to sleep with him for fear that he'll die in the tournament. What started as an implication, it was later confirmed that they indeed had sex.