Self-Deprecation
aka: Take That Me 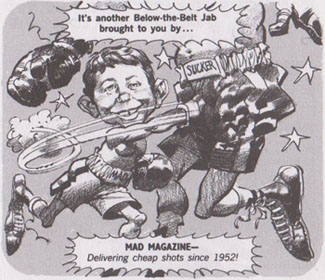 And there's more where that came from!
"He had the kind of face only a mother could love, if that mother was blind in one eye, and had that sort of milky film over the other one, you know? You know what I mean? But still, he was my identical twin."
— Colin Mochrie talking about Ryan Stiles, during a game of "Narrate" on Whose Line Is It Anyway?
Advertisement:

Sure, we all have egos to some degree, save for severe psychological problems; but sometimes you just may not feel like being self-centered or egocentric. Sometimes you may just feel like cracking a joke that says, "Ha! Take That!, Me/Us!" This is the essence of self-deprecation. And there are blondes who tell Dumb Blonde jokes, lawyers who tell Evil Lawyer Jokes and Unitarian Universalists who tell doctrineless-UU jokes.

A Super-Trope to Our Product Sucks. Compare Adam Westing, Self-Parody, Who Writes This Crap?!, Who Would Want to Watch Us?, Take That, Audience!, Offending the Creator's Own, Creator Career Self-Deprecation (including Writers Suck) and Biting-the-Hand Humor (which often involves this trope, seeing as authors usually have someone who greenlights or approves of such works). Contrast These Tropes Love to Brag.

open/close all folders
Arts
Audio Plays
Comedy
Comic Strips
Films — Animation
Films — Live-Action
Pinball
Podcasts
Print Media
Pro Wrestling
Puppet Shows
Tabletop Games
Theatre
Theme Parks
Visual Novels
Web Animation
Man, the people who created and edited this page are a bunch of losers, aren't they? Pretty much sums up my life. Except, of course, that's just being nice.
Statler: I feel like they're all being hard on themselves.
Waldorf: You're right, we already do that for them!
Both: Do-ho-ho-ho-hoh!
Feedback