This page lists some of the Loads and Loads of Characters from the manhwa Yureka and their associated tropes. Be warned that there are many spoilers present.

This page is still under construction and needs more work.

A member (often considered to be a leader) of the team Triple Threat and the main character of the story. In the real world he acts as a diligent student always reading (or pretending to) some learning material and claiming that he doesn't know much about virtual games since he barely even watches TV. In Lost Saga his personality is a complete opposite of that image where he is loud, violent and selfish to the extreme.

Yurekanote Despite being created by Jaeha and sharing her looks, Yureka is (for most of the story) a completely separate person. At a certain point of the story, she is absorbed by Jaeha. From then, they become one, with Jaeha being the one in control but with Yureka's personality taking over most of her behavior.

An advanced AI created by Jaeha as a copy of her own personality in order to serve as her double when she is on a missions. After mistakenly falling into Jang-Gun's hands and becoming used by him in the Lost Saga she was revealed to be a self-aware, fully sentient entity capable of feelings. Yureka's personality is somewhat childish, naive, curious and airheaded but at the same time kind and compassionate. She is very attached to Lotto and prefers to remain by his side, as well as her appearance in the game being exclusively attached to his (unless it is Lotto himself who uses her appearance).

A companion and owner of John who she has a deep crush on, Rapha strongest characteristic is her complete devotion and protectivness towards her guardian, aside from that she is an emotional girl and is easy to provoke or burst into tears.

A younger ice mage who is introduced as a Jerkass using game loopholes to frame, rob, kill, and extort other players (with a particular grudge toward the ones that became famous during the city defense in the Demon War) in order to get money for his gaming fees. 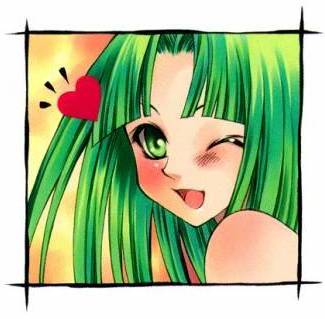 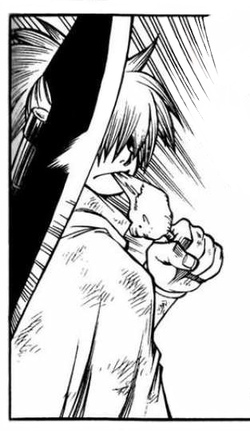 Ah-Dol's older brother and an acquaintance of Jang-Gun. He runs a Net cafe.

The Fallen Angels / The Lovely Angels

In real life a pair of pop singers called the Lovely Angels, the Lee sisters are master-level thieves who use the Net as an escape, where they style themselves the treasure-hunting pair the Fallen Angels. Introduced as casual victims seeking revenge on the original Team Triple Threat, they are now uneasy allies with Lost Saga's other powerful players.Tropes common to the Angels:

A player working as a game moderator for Dexon. Has an old rivalry with Team Triple Threat. For...some reason. 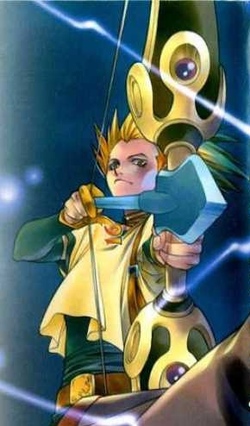 Olios is about to shoot you.
Demon King: (of Olios) "That one's a real pain in the...whatchamacallit."

Introduced as a mysterious formidable sniper who played against Lotto in Force Recon, he impressed Lotto by nailing him with an improbable headshot and was impressed by Lotto when he won the game anyway. An acquaintance of Wun-Ha via the Net Cafe, he later encountered the protagonists in Lost Saga, where he's basically a sniper with a bow. He's since joined the loosely connected ranks of strong players, and sometimes forms a party with Aradon and Hata.

Other NPCs
Any non-players seen around the Net. For Yureka, refer to Team Triple Threat.

A cheerful shopkeeper in Lost Saga whose wares are mostly low-level items, she nevertheless sees traffic from competent players due to her personality.

A guardian AI used by Rapha. He is silent, strong and fiercely loyal to his mistress to the point of being completely willing to die for her (to Rapha own horror), thanks to their cooperation and Rapha protective attachment to him he reached 94 level (which is almost unheard of for AI guardians that cannot respawn after death) and when buffed by his mistress he is more that a match for all but the strongest of players and monsters. Aside from being her assassin class companion in the game John also serves as her electronic assistant in the real world.

An NPC first introduced during the Demon War where he served as one of the Four Devas of the Demon King. Later, he reappears with different name as a player who took the top position in the Dragon Lands. It is revealed at some point that he, just like Yureka, is an advanced self-aware A.I. created by Jaeha.

The fairy who embodies Basara's BFS. He's the only one who can see her, so their discussions are certainly strange for other characters to watch.The testy spirit of Basara's BFS.

Tropes common to all employees playing parts in Lost Saga:

Those not part of other groups.

An enigmatic bartender.
Dragonlands Players
General tropes associated with most characters from Dragonlands:

A master-level anti-priest and the oldest player of Lost Saga.

Ranked second in the Dragon Lands

One of the Dragon Ladns PK'ers ranked 5th from the top, has a strong crush on Whan but he doesn't seem to be aware of that.

PKer from the Dragon Lands ranked 8th from the top; has a unrequited crush on Phuan, with whom he formerly partnered. He is a skilled programmer and developed and spread his own hack called "Checker," which allows its users to detect hacks used by other players. (His own version of that program also includes some other special anti-hacker functions.) Has a deep dislike of those who use hacks to cheat in game. 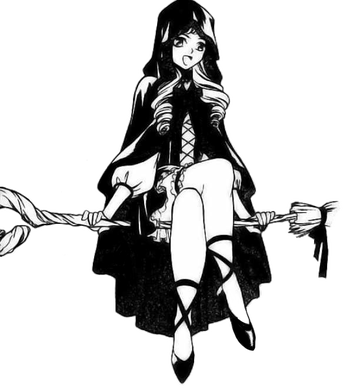 Three PK-ers from Dragon Lands, each of them by himself counts as a rank A bounty but since they are always acting as a team of three the can be counted as a rank S bounty worth a total of 18,000,000 gold.

Two PK'ers from Dragon Lands that sit on the beach waiting for any inexperienced newcomers to kill. While this appears to be a fairly succesful routine pretty much the only screentime they've got are the moments when they are trying their stunt on people they really shouldn't mess with (like Alpha, Yureka or Ah-Dol and Boromir) or just being handed the short end of the stick by a far more powerful PK-er (like Phuan) steamrolling over them.
Real World

Yureka's creator, from who the AI derives her appearance and personality. After her first appearance in the early chapters, she was a complete mystery for hundreds of chapters, so her every trait is a spoiler. A hacking prodigy, Jaeha created both Yureka and Ijoyen with a Brain Uploading method she developed, revolutionary technology which has turned all involved into targets, making her personally responsible for Yureka's Myth Arc.

A low-level worker for Dexon and friend of Wun-Ha's, he skirts just close enough to the serious Corrupt Corporate Executives to act as an inside source.