Oldest child and only daughter of the late King of the Pirates, Gol D. “Gold” Roger, Andrea is the overly determined, slightly naïve, overly idealistic older twin sister of Fire Fist Ace, and the adopted sister of Monkey D. Luffy and Sabo. Born exceedingly fragile in health and overall physique, her family ties and an incident involving a block of Seastone put her on the radar of Admiral Akainu, who, in true Jerkass fashion blackmails her into becoming an agent for the Navy. After a series of misadventures where she tries to stay neutral in mentality, she eventually winds up as a Vice-Admiral and the student of the ultimate born-and-bred female Marine, Admiral Shiroyoru, much to her fright. 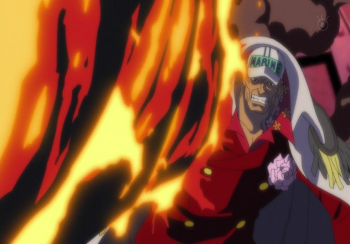 How am I supposed to even look at myself? My life… What I’ve done… What has it been for? - Andrea's Awakening, Chapter 18

Real name Sakazuki, Akainu (赤犬, Red Dog) used to be one of the three Admirals, the strongest fighters in the Marines. Akainu is apparently the most hard-line of the Marines, following the doctrine of Absolute Justice. During the destruction of Ohara, he destroyed an evacuee ship on the chance that one of their targets was aboard, saying that if one is to do a job it must be done properly. He has eaten the Magma-Magma Fruit (Magu-Magu no Mi), a Logia Devil Fruit based around magma, turning him into a living volcano.

However, falling in love with Gol D. Andrea, the daughter of Gold Roger the Pirate King of all people, and nearly losing her as well as a hellish mission that goes even beyond his rather low ethical standards makes him reconsider all that he has believed in, and ultimately give up his seat as admiral to someone more deserving, symbolised by his alias change to Akarô (紅狼, crimson wolf).

If man is corrupt, then what is justice?

Real name Kumori C. Theodora [曇理・シ。・テオドーラ, te o do ra], Theo (never “Thea”) is the head of the Kumori Clan, Smoker’s eldest sister, and Kuzan’s wife. She is noted to be the “strongest woman” in the Navy, easily having the power of becoming admiral (which she becomes in Awakening), and intimidating Monkey D. Dragon. Already a deathly combatant without any extra powers, she has eaten the Zero-Zero Fruit, giving her the ultimate freezing powers and control over Thermodynamics. Marines call her the “most awesome thing alive since the invention of curry”, and her mere presence usually demands respect, a fact enhanced by her mastery of Sovereign’s Haki. Andrea describes the latter as a compulsion to bow to her, which is even worse for Danarans of any social standing.

Like all of her siblings but Smoker, Theo is noted to be left-handed, meaning that whenever she is not using her left to attack, she is trying to refrain from killing her target.

Theodora’s given name is Ancient Danaran, and thus gives people trouble to pronounce it properly, leading to her initial alias of “White Night” [白夜], which is also her codename as admiral.Due to a genetic quirk, Theo is unable to blush, and will instead make various grimaces that indicate similar states of agitation. Out of her four children, only her eldest has inherited this trait. 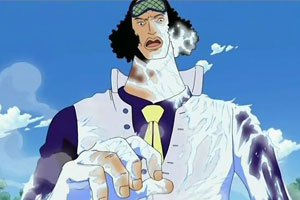 Do you know who we are, my daughter?

Kumori C. Kuzan [曇理・シ。・クザン/九山, cloud of justice & nine mountains] is one of the three admirals before the time skip, codename: Aokiji (青雉, Bluebird; literally, Blue Pheasant). While being the youngest of the trio, he is physically the strongest due to the physical nature of his devil fruit and him having only eaten it long after making Vice Admiral; he is also the one Sengoku trusts the most in terms of ethics and skills, and is considered highly popular with the troops. A testimony to this trust is the fact that during his tenure as an admiral, Kuzan is trusted with the command of the home garrison of Marineford.

Sengoku has essentially groomed him to be his successor, more so as he sensed the oncoming storm, and finally, Kuzan becomes Fleet Admiral himself as such.

Despite being a self-proclaimed lazybones that rarely gets surprised or angry, Kuzan has, like most Kumori, a near-ridiculously short temper with fools and idiots; and like most males of the clan in a relationship, he has tendencies of extreme jealousy and territorial behaviour. 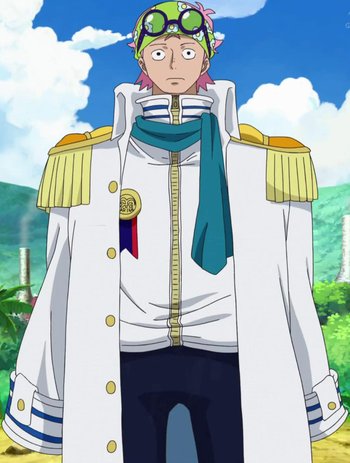 Coby is first introduced as a cowardly Chore Boy on board Alvida's ship. Through fear of being smashed by her Iron Mace, whenever she asked him who was the loveliest on the sea, he would reply, 'You are, Miss Alvida'. Eventually with the help of Luffy he found the courage to pursue his dream of leaving her and becoming a Marine.