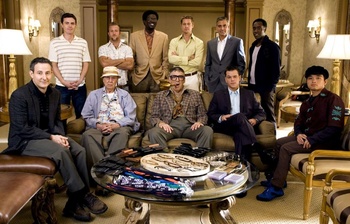 The crew of specialists that Danny Ocean assembled to rob the vault of Terry Benedict's casinos in Las Vegas. They were reunited on at least two more occasions. 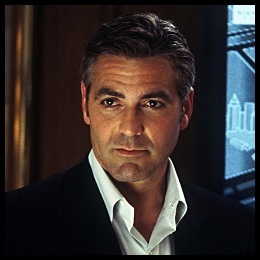 "Cause the house always wins. You play long enough, never change the stakes, the house takes you. Unless, when that perfect hand comes along, you bet big, and then you take the house."

Dubbed in French by: Samuel Labarthe

A master con artist, the eponymous protagonist of the film trilogy and the crew's mastermind. He knows everything about Las Vegas and nearly everyone of importance in the casino business there. His plan in the first film is to rob the main vault of three casinos to take revenge on Terry Benedict, who stole his wife from him and owns said casinos.

He seemingly died of unspecified reasons shortly before his sister Debbie was released from prison in Ocean's 8, but Debbie has doubts about this. 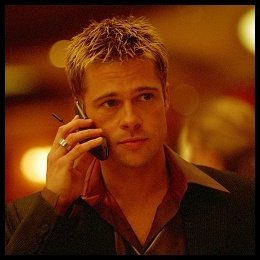 "Off the top of my head, I'd say you're looking at a Boeski, a Jim Brown, a Miss Daisy, two Jethros and a Leon Spinks, not to mention the biggest Ella Fitzgerald ever."

Dubbed in French by: Jean-Pierre Michaël

Danny Ocean's level-headed right-hand man and most trusted friend. A jack-of-all-trades, he plays a number of roles in the heists themselves. 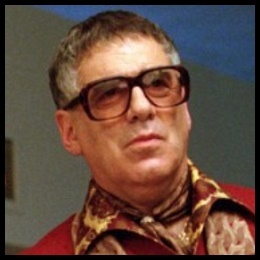 "You gotta be nuts, too. And you're gonna need a crew as nuts as you are! Who do you got in mind?"

Dubbed in French by: Bernard Tiphaine

A crooked venture capitalist and ex-casino owner who loves Vegas and its charms and cherishes the golden days, and an old friend of Danny Ocean and Rusty Ryan. He joins the gang as their financial backer to get revenge on Terry Benedict for torpedoing his casinos in the past. He invests in Bank's hotel-casino in Ocean's Thirteen, only to end up betrayed and with a heart attack, which prompts Danny and his crew to plan a heist solely to avenge him.

He seems to be a close friend of the Ocean family at large, given how he reconnects with Debbie as soon as she is released from prison in Ocean's Eight. 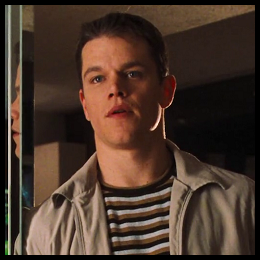 Dubbed in French by: Damien Boisseau

A skilled pickpocket and Ocean's protege. Linus comes from underworld royalty, as both of his parents are famous thieves. He desperately seeks to earn some respect of his own by pulling off big scores. 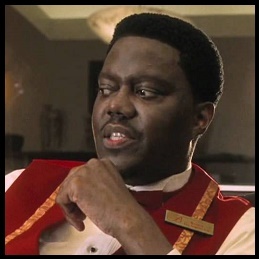 A retired con artist who now works as a croupier. He is recruited by Danny Ocean as an inside man and gets himself transferred to Terry Benedict's casinos in Las Vegas. He does the same to infiltrate Willy Bank's casino a few years later. 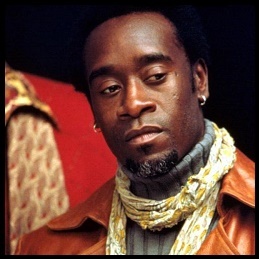 "So unless we intend to do this job in Reno, we're in barney..."

An engineer and bank robber, Basher is in charge of the demolitions and heavy machinery involved in the heists. He speaks in an impenetrable combination of Cockney slang and technical jargon. 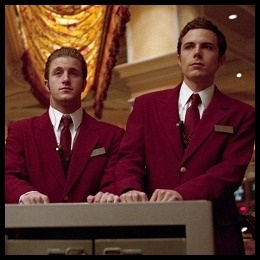 Turk: "I'll give you a million dollars if you don't speak for a month."
Virgil: "I wanna eat your whole head."

The Malloys are a pair of bickering Mormon brothers from Utah who do all the simple grunt work, but especially act as the wheel men. 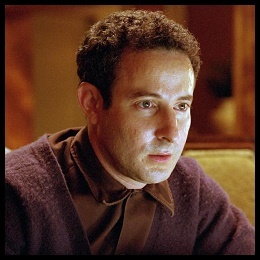 Dubbed in French by: Philippe Siboulet

A tech expert who specializes in electronics, communications and surveillance and moonlights for the FBI. Neurotic and soft-spoken, he's more comfortable with machines than people. 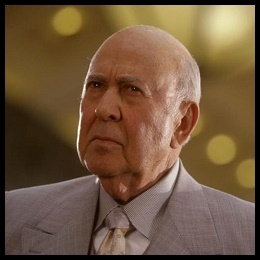 A cranky old-school con artist, Bloom would rather be enjoying a comfortable retirement than having to pull off one more crazy heist. 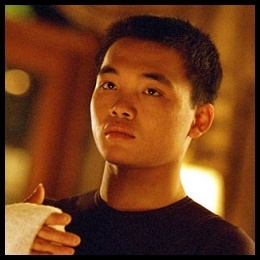 "Where the fuck you been?!"

The grease man, Yen is a Chinese acrobat and contortionist who is in charge of all the dangerous physical stunts. He speaks entirely in Mandarin except when he curses, but appears to understand English well enough. 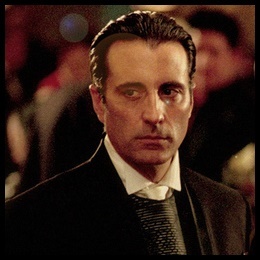 "Alright, you proved your point. You broke into my vault. Congratulations, you're a dead man."

Dubbed in French by: Bernard Gabay

The main antagonist of the first film, he is a ruthless billionaire who owns the Bellagio, the MGM Grand and the Mirage, three of the biggest casinos in Las Vegas, and he's also the new lover of Tess. He provides the impetus for the second film by tracking down the Eleven and demanding repayment (with interest), and later becomes an ad hoc member of the Thirteen, both as a financial backer and shill.

François Toulour, a.k.a. "The Night Fox" 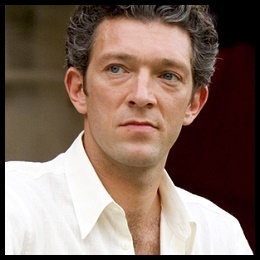 Dubbed in French by: Vincent Cassel

Known as "The Night Fox", François Toulour is a very rich, obnoxious and truly accomplished French thief. A former pupil of legendary master thief Gaspar LeMarque, he is envious of Danny Ocean's Las Vegas grand theft. He is the main antagonist of the second film. 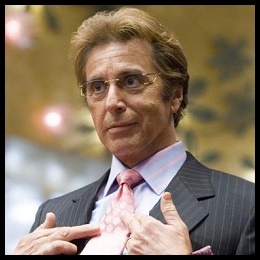 Dubbed in French by: José Luccioni

A ruthless hotel and casino mogul and a longtime friend of Reuben Tishkoff... until he betrayed him, muscling him out of his share and causing him a stroke. He is the villain of the third film. 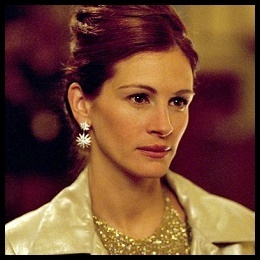 Dubbed in French by: Celine Monsarrat

The ex-wife of Danny Ocean, who by the first film has shacked up with Benedict. She's the main reason why Danny decides to rob Benedict's casinos. She steps in action after most of the main crew are jailed during a failed heist in Ocean's Twelve. 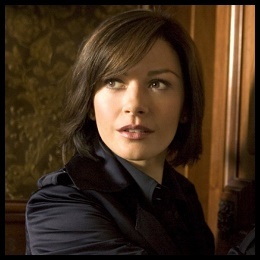 An Interpol agent who is introduced in the second film. She has been hunting down a master criminal, Gaspar LeMarque, for many years. She's also Rusty Ryan's former love interest, to complicate matters. 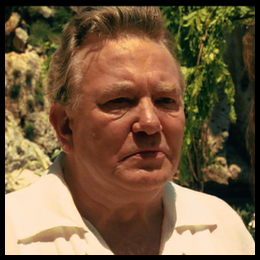 Dubbed in French by: Claude Brosset

A living legend among thieves. 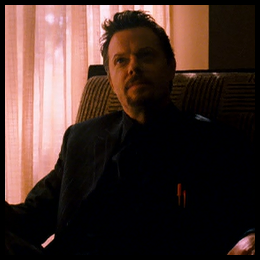 Dubbed in French by: Tierry Wermuth

A genius inventor and fellow European colleague to Danny Ocean. He provides advices to Danny in order to pull off the Bank heist. 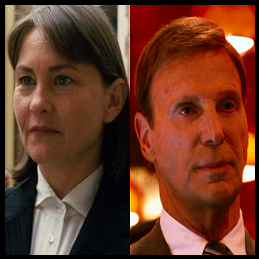 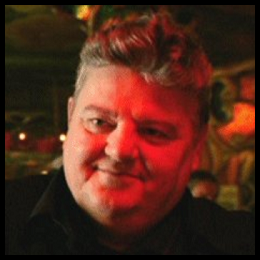 "When I was four years old, I watched my mother kill a spider... with a teacosy. Years later, I realised it was not a spider - it was my uncle Harold."

Dubbed in French by: Patrick Messe

A con artist that Danny, Rusty and Linus meet in Amsterdam. 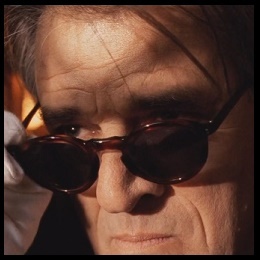 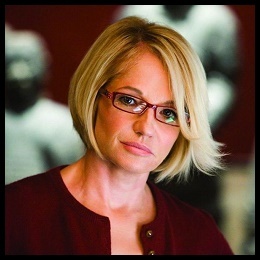 Willy Bank's personal assistant. She's the one really in control of everything at his casinos but is still utterly subservient to Bank. 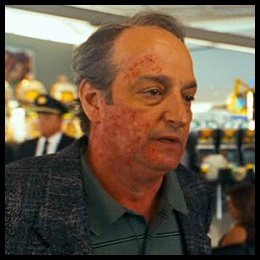 Dubbed in French by: Pierre Laurent

The reviewer for the Royal Review Board who assesses the quality of experience in hotel resorts. Names himself the "Very Unimportant Person" for having been treated as if he weren't important at the check-in line of the Bank Hotel.