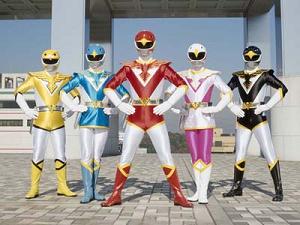 Chōjin Sentai Jetman (Aviator Squadron Jetman) is the fifteenth Super Sentai series, running from 1991 to 1992. Notable for being a tribute of Gatchaman. Originally intended to be the origin point for the Power Rangers franchise, but Kyoryu Sentai Zyuranger's Sixth Ranger proved to be a major draw for Haim Saban.

In the year 199X, an international defence agency called Skyforce creates a method to develop Super Soldiers by infusing humans with "Birdonic Waves". Five of the best Skyforce officers are chosen as the first subjects; unfortunately, the experiment is interrupted when an army of extradimensional invaders known as the Vyram launch a surprise attack on Skyforce's orbital base.

Four of the five Birdonic Waves fall to Earth and strike four random Japanese civilians, imbuing them with superhuman power. Ryu Tendo, the only Skyforce officer to successfully receive the Birdonic treatment, is tasked with recruiting and training these ordinary people to fight against the Vyram as the Earth's last hope: the Jetman.

in North America courtesy of Shout! Factory, making it the first Super Sentai series with no Power Rangers equivalent and first pre-Zyuranger series to be made fully available fully intact in North America. Shortly before the set was released, the team appear for the first time on a North American DVD through Episode 51 of Mirai Sentai Timeranger.