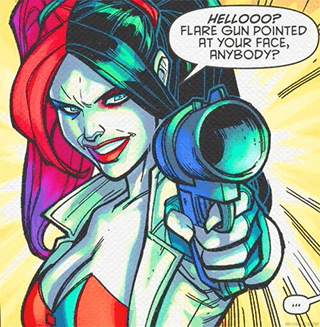 An emergency tool used to signal rescuers to your location, the Flare Gun is a must should you get lost or in need of assistance. Otherwise, it can be used to signal something else.

In fiction, the Flare Gun also serves as a weapon, though probably Awesome, but Impractical against anything but enemies explicitly weak to light or fire, as it can be very inaccurate. For some reason, they tend to be treated like single-handed Grenade Launchers in many works. It should be noted that real-life flares don't fly fast enough to enter the human body, if you got shot with one, you would mostly get hurt by the impact as the flare bounced off.

If this is provided as an FPS weapon, it may have two or more uses. One is the above, where it's used to light up enemies on fire and two be used as a Puppet Gun used to call down artillery or airstrikes and the like. Although some games (especially ones that have prevalent dark areas) are willing to use the flares as a way to light up said dark areas.

There is some overlap with the Pocket Rocket Launcher trope, as flares are rocket propelled, and are fired from a modified 12-gauge shell. This is more for practical reasons than Rule of Cool, since signal flares are usually fired from a dinky plastic launcher that can't hold any pressure itself. Since they aren't actual weapons, they don't have to be at all accurate (all they need to hit is the sky), and actually need to be as flashy as possible to achieve their true goal of attracting the attention of Search-and-Rescue personnel. As a good rule-of-thumb, all flare guns (barring specific outliers that shall not be counted) are Pocket Rocket Launchers, but not all Pocket Rocket Launchers are flare guns.

Not Good at Flares

The Tobins are not good at flares, especially Ham.

Not Good at Flares

The Tobins are not good at flares, especially Ham.