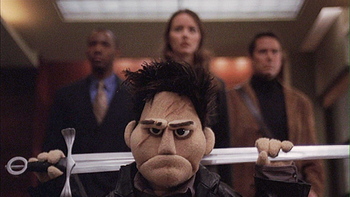 "I do not have puppet cancer!"
"Quickly, to the Angelmobile! Away!"
— Spike, "In the Dark"
Advertisement:

As downbeat and heavy as Angel can be, it is a show set in the Buffyverse, and as a result, it has some comedic gems spread throughout its run. Sometimes, these can come from really dry or Black Humor that bleed out of the nasty predicaments the members of Angel Investigations come across on a regular basis. But, in other cases, the fantastical nature of the series can produce some very zany situations and gags that play the comedy a little straighter. Regardless, general Whedon snarkiness is a given for any and all episodes.

Cordelia: I can understand people who drink too much. I understand people who put a little note on the parking meter that says it's broken when it's not. I don't understand people who worship demons.
Gunn: Yeah. Especially Lurite demons. The stink on that thing...If you're a prince of the underworld, bro, take a Jacuzzi every once in a while.
Wesley: It's sad. The only way some people can find a purpose in life is by becoming obsessed with demons. By the way, Gunn, technically that wasn't a Lurite. It was a Murite, a sub-species of the Lurite. The male sports a small, tell-tale fin just behind the third shoulder.
Gunn: So glad to know we're not the sad people obsessed with demons.
Wesley: We have to be a little obsessed. We're detectives who specialize in these things.
Cordelia: But we're not sad.
Wesley: No, we're a happy and rambunctious lot if I ever saw one.
(blank stares from Gunn and Cordy)
Wesley: Not going to humor me even a little, are you?
Cordelia: Uh-uh.
Wesley: I realize we sacrifice a great deal of our social lives. But we have to. Work demands it.
Gunn: True. Who's got time for love when you're out there doin' it with the demons? (off Wesley's expression) Didn't that just come out sad and wrong. (sighs) I need to get out more.