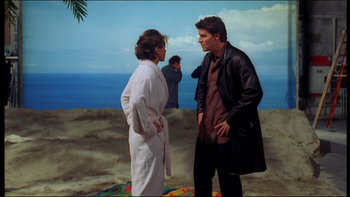 Cordelia has won a role in a national commercial and the Angel Investigations team celebrates at an expensive restaurant. They jokingly ask Cordelia to not forget them when she becomes a big star. She assures them she could never do that as long as she continues to receive the increasingly-painful visions. Angel shows his discomfort with the modern world when he balks at the menu and the cost in the restaurant. Angel makes a scene when he grabs a woman wearing a shawl that he mistakes for a witch's garb, forgetting the mundaneness of the restaurant. Moments later, Cordelia discovers that the food she had aspired to eat is not all that great as she throws it up on the floor of the restaurant.

The next day, Wesley speaks with his parents on the phone, and his father disparages everything Wesley says, showing how disconnected their values are. Angel makes an appearance on the set where Cordelia's commercial is being shot, enjoying the fake sunlight effect of the beach scene. The director asks to see Cordelia in just her bikini costume, and then makes rude comments about her appearance, diet, and desirability. Angel is ready to kill the guy for Cordelia, but she just wants him to leave and stop damaging her career, as Angels does not realize the rules are different in this world that Cordelia wishes to work in. In his world, Angel and Cordelia are saving the world. In the acting world, Cordelia is a piece of meat and Angel is an "unemployed musician".

Gunn's friends, George and Rondell, arrive at the hotel, requesting Gunn's assistance with a vampire problem. They are a little annoyed with Gunn that they have seen so little of him recently in their world since he is always helping Angel now. Gunn is willing to help, but just then, Angel returns with news on the Haklar Demon they're tracking and Gunn's friends are put on hold. Angel expresses his worry for Cordelia to Wesley and Gunn. At Caritas, an ugly gray demon enters through a portal that opens in the club while the Host is singing "Superstition". Angel and Wesley return to the hotel after killing the Haklar demon to find Cordelia in the aftermath of her embarrassing job experience. The director made it clear that she was really just there for visual purposes, not her acting abilities.

The Host visits the hotel. He is there to request the aid of Angel Investigations to kill the Drokken demon that arrived unexpectedly at Caritas. He stresses the importance of killing the demon, as it is a man-eating demon and probably very hungry. They agree to help but just then, Cordelia gets a vision of a woman in a library and a portal opening up behind her. Gunn returns to the hideout of his gang to be met with angry, accusatory stares. George has been bitten by a vampire and they don't know if he'll be coming back undead or not.

At the library, a description of the woman and pendant Cordelia saw in her vision is given to a librarian. The woman recognizes it, but says that its owner, a woman named Fred (short for Winifred), has been missing for five years. While investigating the area where Fred disappeared, Cordelia finds a book in an odd language and reads some of it aloud. The Host is worried as she sounds out the text and he tries to say something a few times, but doesn't. Suddenly a portal appears in the library and a large green demon, similar to the Host, appears.

The Host recognizes the demon as Landok, but he isn't excited about it in the least. Landok identifies the Host as Krevlornswath of the Deathwok Clan and the Host admits that the two demons are cousins. Landok questions the Host's disappearance from their home dimension, but the Host has no interest in returning. He is at home on earth, while his cousin just wants to get back to his own home dimension, where everyone is expected to engage in hunting and gathering , and other pursuits have no place. The Drokken demon becomes the focus again as Landok offers his help and expertise to track and kill it. On the streets, Gunn confronts Rondell, saying they should have waited for him to attack the vampire nest, but Rondell makes it clear that they've been waiting for him for far too long.

While searching for the Drokken, the Host tells Angel about his homeland, painting a very interesting picture. With the help of Landok, the gang is able to locate the Drokken and Angel and Landok go after it. The demon has a woman he's holding for food, and the gang must save her. Landok is fatally bitten, the bite being venomous to his kind. A big fight ensues with the demon as it runs off after the woman. Wesley and Angel battle as best they can against the demon and Angel finally kills it by throwing a sword through its throat.

Outside, Cordelia reveals that they can get Landok back home for a cure by reading from the book. She's not sure how she's positive about it, but she is. Gunn and Rondell burn George's body on top of a stack of wood, sad for the loss of their friend. At Caritas, Landok reads from the book and after a portal opens and closes, Landok is gone. As the gang muse over the latest adventure, they find that Cordelia has vanished.

Cordelia wakes up in unfamiliar territory, realizing she's in a whole new world.