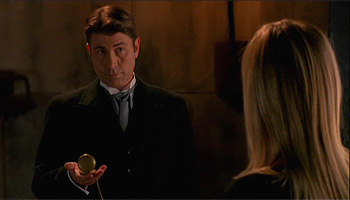 We open on Cordelia and Wesley eavesdropping at the cellar door. Angel emerges with his laundry and seems quite chipper. He's accepted what happened with Darla and apologizes for any grief he may have caused them. He knows he can't look for Darla anymore unless she wants his help, but most of all, he's learned to let go. Cordy and Wes are very proud of him but their pride is short-lived when Gunn bursts in and announces "I found Darla!" Meanwhile, Lindsey pays off a motel manager and then enters a skeezy room, where Darla is applying makeup for some upcoming occasion. Lindsey remarks that she's a hard one to find.

At Wolfram & Hart, Darla and Lindsey meet with Holland. Darla irritably says there's nothing between her and Angel anymore, so if they expect her to keep playing succubus, then they're out of luck. Holland says it's not about Angel, and that Darla's not their prisoner but their "moral responsibility." Apparently, shortly after Darla's rebirth, W&H ran extensive medical tests on her, the results of which Darla now has an opportunity to read. And weep.

Flash to a seedy bar, where Darla is making doe-eyes at some vampire dweeb. Basically, she's trying to hide her loathing for this creature so that he will sire her, but he's not interested in "commitment." She talks him into it, and just as he's about to bite her neck, he gets dusted by Angel. Angel tries to reason with her and attempts to convince Darla to give her second life as a human a chance. Darla interjects, "I'm dying." She has seen the medical files and she only has a few months to live, so she's in a bit of a hurry.

At the Karaoke bar Caritas, Darla is onstage serenading the audience with a bluesy torch song. The Host, who is listening in, confesses to Angel that they "may not be able to save this bird." Resignedly, The Host scribbles down an address and gives it to Angel, warning, "It's a bit of a quest", and Angel will probably die in the attempt. Angel is, naturally, all over that idea. Cut to Angel and Darla standing over an empty swimming pool. Angel quickly catches on that it's "a whole leap of faith thing." Angel strolls out onto the diving board and takes the plunge. Darla expects Angel to crash into the cement, but he instead falls through an invisible portal. He is welcomed by a creepy Englishman dressed like a butler (The Valet), who teleports Darla into the room as collateral. He explains that Angel must complete three trials to save Darla's life. However, if Angel does not succeed, both lives will be forfeited.

The Valet disappears and the gate opens, through it walks a green warrior demon. Angel manages to get his hands on the demon's sword and cut him in half. However, the demon wakes and reattaches his torso to the rest of him. The fight resumes and again the demon again sawed in half, only this time, Angel ties one half against the corner wall with a chain, and another at the other end of the room. The next challenge preys on Angel's vampiric nature. He must venture down a long hallway that is inlayed with wall-to-wall crosses, with a baptismal font in the center. Angel makes a run for it and grabs the key inside the font, which is full of holy water. Ouch. The final challenge is, well, Sudden Death: Angel suddenly finds himself spread eagle in front of a wall o' wooden stakes. The Valet tries to persuade Angel that he can walk away from the trials. Angel orders him to pull the lever, and the stakes are fired at him. To his surprise, Angel finds himself back in the antechamber, fully dressed but worn out from his physical ordeal. The Valet calls Darla over so that she can be "made whole", but something appears to be wrong. He apologizes, and surmises that Darla is being kept alive by supernatural means. The Valet cannot help her because Darla is already living her second chance. Angel doesn't take this twist well.

The pair return to the motel, Angel comforting Darla as she sits on her bed contemplating her condition. Angel thinks about siring her, perhaps gambling that his soul might transfer to Darla, but she turns him down. Angel is furious that The Powers That Be would return a life only to crush it so quickly. Darla reasons that she brought back to die, the way she was supposed to in the first place. Suddenly, Wolfram & Hearts goons break into the room and debilitate Angel with a stun gun. Lindsey struts in, followed by Drusilla. The men keep a hold on Angel as Dru approaches Darla, changes to vamp face and bites her neck.