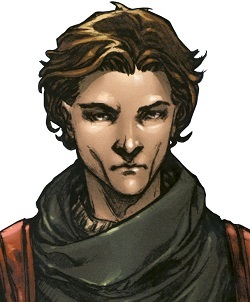 Zayne is nicknamed "the worst padawan in Jedi history" due to his terrible luck and lack of anything resembling combat ability. Framed for the murder of his fellow students (which was really comitted by his Knight Templar master), Zayne winds up on the run, trying to clear his name and expose the mysterious Jedi Covenant, while crossing paths with various significant figures of his era. 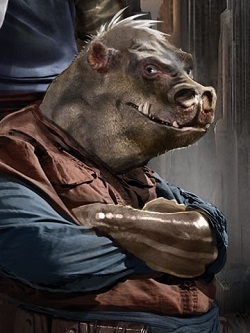 Gryph is a Snivvian conman who was Zayne's special nemesis, until the Padawan Massacre made him an outlaw as well. Labelled an accomplice, Gryph aided and protected Zayne at first to save his own skin, but he grew to care for the boy as a true friend. He is quite clever, and is known for coming up with wild schemes that either go well, or spectacularly awry. 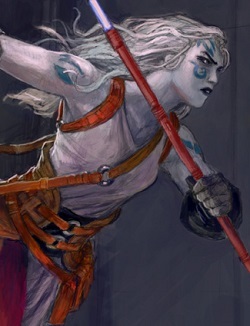 Jarael is an Arkanian offshoot who helped Zayne and Gryph escape Taris. Though at first she didn't trust either of them, she gradually came to like and respect both fugitives from justice. She herself has a shadowed past with a gang of slavers called The Crucible. Jarael's main flaw is her hotheadeness, which tends to get her into situations that she can't fight her way out of. 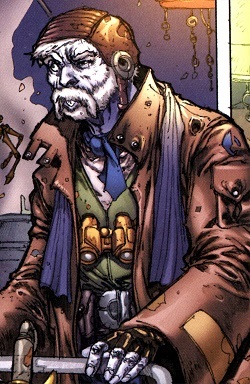 A crazed but brilliant Arkanian offshoot that lives with Jarael on the Last Resort. Many years ago, he saved the girl from slavers, and she, in turn, has protected him from his own enemies as his mind begins to fade. Gryph comes to him with Zayne seeking help in escaping Taris, and after a series of escapades he decides to tag along and let them use his ship. 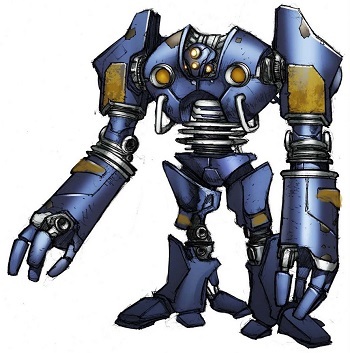 A binary loading droid used by the Taris Jedi to move heavy equipment. Some time before the comic began, he overheard the Conclave's plan to kill their Padawans, and was destroyed to cover it up. Camper winds up repairing him with a more advanced processor, granting him increased intelligence and an unstable personality, as he is now capable of understanding that his trusted master Lucien harmed him. 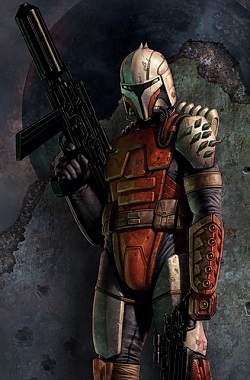 A Mandalorian Crusader who became notorious among his clan for finding ways to survive suicide missions — something that's frowned upon in their society. This, combined with his outspoken belief that Mandalore the Ultimate's crusade is a wasted effort, made him something of a reviled figure to his fellow warriors. He meets the gang while on yet another suicide mission from Cassus Fett, and decides to go AWOL to avoid his leaders' wrath. 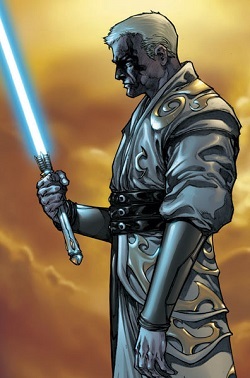 "If we cannot change what others will do in the future, we can change what we do. We can choose a different role. We cannot avert the prophesied doom — but we can survive it. And we will survive. We are few, but the Jedi ways will go on after the tribulations come. I know this because I am the son of Krynda and Barrison Draay — and at last, I can see my future."

Lucien is the son of the great Jedi masters Barrison and Krynda Draay, and is determined to live up to their legacy and prevent the return of the Sith — at any cost. Guided by apocalyptic visions of the future, Lucien has killed or otherwise wronged hundreds in his quest to vanquish the darkness exactly as his Treacherous Advisor Haazen intended. Above all else, though, he desires something he can never have — the approval of his dead father and reclusive mother. 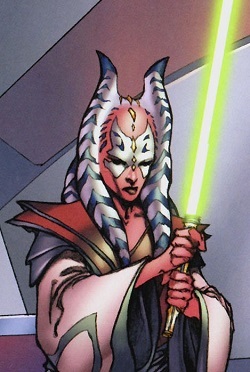 One of the masters of Taris. She suffers nightmares due to a lack of friends to help her and her own guilt. She believes that killing Zayne is the only way to stop her nightmares, so she tries to kill him. She hires mercenaries to kill his family and then manipulates his ex-girlfriend to try and do the deed. Her plans go to hell during her battle with Zayne, and when she finally realizes her mistake, Tey's killed in an explosion. 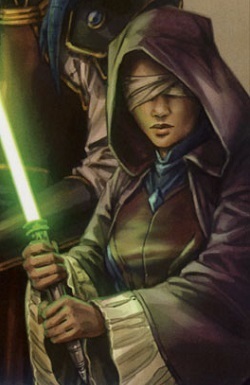 Q'Anilia is a Miraluka, and even for that species is a powerful seer. She believes very strongly in the prophecies they have, seeing them as infallible and inevitable, and in that way blinds herself to other possibilities. Although she cared about her Padawan, Shad Jelavan, she doesn't speak against the murder because she thinks averting the prophecy is more important. 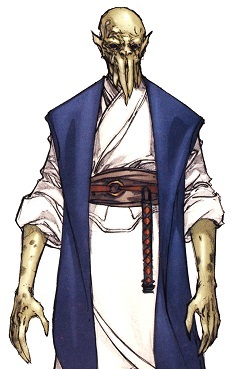 The most reluctant member of the conspiracy against Zayne. Xamar argued against killing the Padawans, and though he ultimately partook in the crime it never sat easy with him. He remains a cautious participant in the Covenant, clashing with Lucien and the others' demands for extreme measures. 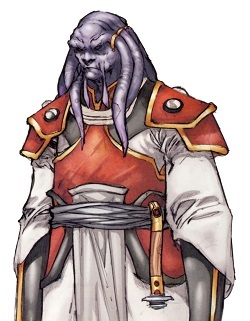 A Feeorian, Feln is huge and powerful. He holds the position of the Exalted among his home village, which he's happy to use for the Covenant's benefit while neglecting their needs. He and Raana Tey are the quickest to violence.
Krynda Draay 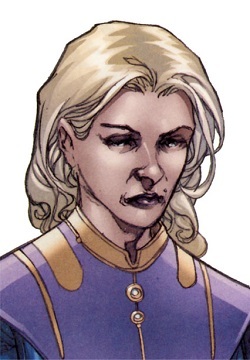 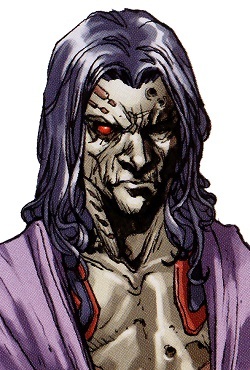 Haazen is Lucien's mentor and aide-de-camp, the ultimate mastermind behind the Jedi Covenant. A dark mirror of Zayne Carrick, he was kicked out of the Jedi Order because of his ineptitude and has been consumed with bitterness and the desire for revenge. As a result, he dabbled in Sith sorcery and manipulated Lucien into bringing about the events necessary for the destruction of the Jedi order and Haazen's ascent to the highest reaches of power. 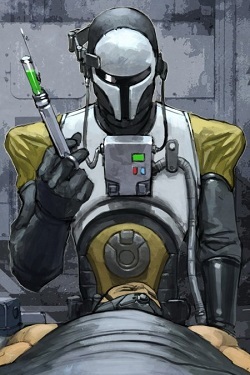 Demagol, aka Antos Wyrick, is a Mandalorian mad scientist who is obsessed with finding the secrets of the Force so that he can replicate it or neutralize it. He also trained Jarael, and several other Force-sensitive children as part of a super soldier project, but lost everything when the Crucible abducted his charges and burned his lab to the ground. He is a psychopath with no moral qualms, yet is a good manipulator, passing himself off as Zayne's friend Rohlan for many months. 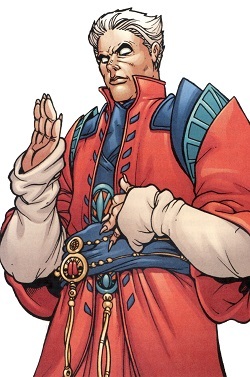 Lord Adasca is the ruler of Arkania and head of Adascorp, and his pleasant exterior masks the soul of a snake. He desires two things: to "purify" the Arkanian race of "corrupt" offshoots like Jarael, and to raise his homeworld's glory beyond anything his ancestors could have dreamed of. A power unto himself, Adasca offers his services to the Republic and Mandalorians alike, so long as he comes out ahead in the bargain. 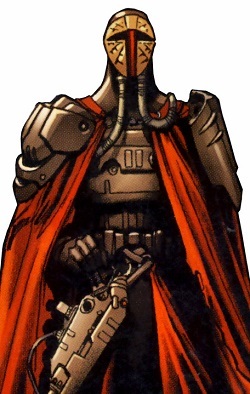 The warrior-king of the Mandalorian clans who, like many before him, gave up his old name to become Mandalore — "The One Ruler" in Mando'a. A proud, savage warrior who follows no code of honor but his own, he dreams of nothing less than complete domination of the galaxy. He is one of the most deadly hand-to-hand combatants in the galaxy, surpassing even many Jedi. Sectarian conflicts between the Jedi and the Sith matter little to him: so far as he is concerned, all sorcerers with lightsabers are fair game. 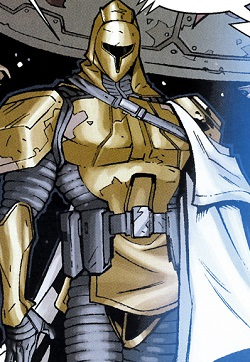 Field Marshal of the Mandalorian Neo-Crusaders, Cassus' brilliant tactical mind has proven one of Mandalore's biggest assets, earning him his high rank and position as Mandalore's aide-de-camp. Cassus is a bit of a cipher even to his fellow warriors (even the notoriously inscrutable Demagol noted in his journal he had no idea how Fett's mind worked), but everyone knows this man is a force to be reckoned with. 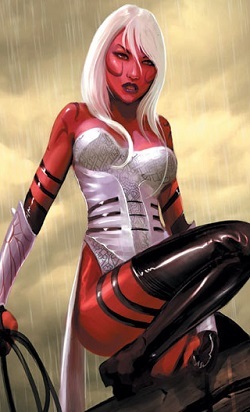 Chantique is the Magister Impressor of the Crucible, a slaving guild that uses training methods to turn people into amoral killing machines. She has a nihilistic view of the world due to being sold into slavery by her own father, as well as getting stabbed in the back both figuratively and literaly by Jarael. Now she is determined to make Jarael suffer in anyway possible, mainly through torturing Zayne Carrick. 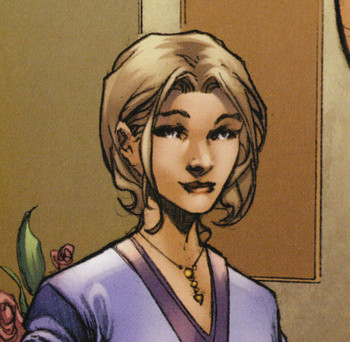 Shel is Zayne's ex-girlfriend. Their relationship hits a massive snag when Zayne is accused of murder (her brother was one of the victims.) She is manipulated by Raana into trying to kill Zayne but after two failed attempts (the first due to a combination of Del Moomo's stupidity and Gryph's quick thinking, and the second due to Zayne having an emotional breakdown about her brother's death causing her to lose the will to do it), she learns that Zayne is actually innocent and saves his life. Later on they patch things up and are co-running an organization to help fugitives. 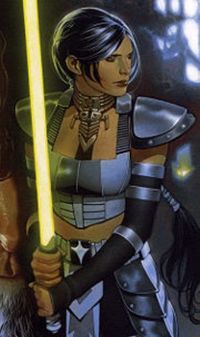