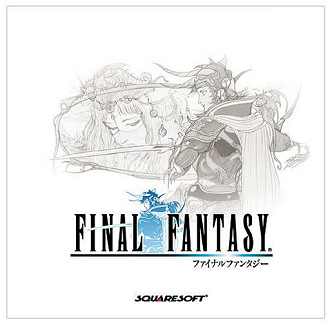 Just don't get your hopes up for a sequel. That'll NEVER EVER happen, are we right? RIGHT? RIGHT?!
The world lies shrouded in darkness.
The winds die. The seas rage. The earth decays.
But the people believe in a prophecy,
patiently awaiting its fulfillment.
"When darkness veils the world,
four Warriors of Light shall come."
After a long journey,
four young travelers did at last appear...
...and in the hand of each was clutched a crystal.
The opening note as re-translated for Theatrhythm Final Fantasy

Here it is: the very first entry into the then-unknown (but now lip-smackingly popular) Final Fantasy series.

In the 1980s, the Director of Planning and Development at Square was feeling dispirited about the game industry; after working on several games that failed to take off, he decided to produce one last game and retire.

The game's story focuses on the trials of the Light Warriors, four people who were either Thieves, White Mages, Black Mages, Warriors (Fighters in the original translation), Monks (Black Belts in the original translation), or Red Mages.note Different party combinations yield different results. Each character class has different abilities in battle and a variety of weapons and armor to choose from; completing a certain quest near the middle of the game allows players to upgrade the character's classes into a more powerful version (which gives them brand new abilities). The game also has three modes of transportation besides walking: ship, canoe, and airship. Final Fantasy I's main competition in Japan, Dragon Quest II, only had three characters with pre-set abilities and a single mode of transportation by comparison.

And then we have the plot: the Light Warriors have to save the world from the evil Chaos.

...yep, that's pretty much it. The game didn't have much of a story to back it up; it was almost purely gameplay, lifted whole-cloth from the 1st edition of Dungeons & Dragons, with your characters going from town to town in order to save said towns from nearby threats and such. Then again, the story still had more complexities than the typical Excuse Plot of your usual 8-bit fare at the time. That said, the game's plot did develop quite noticeably at the end of the game, Twist Ending and all.

Excuse plot or no, Final Fantasy became Square's first big hit — and it helped change the RPG industry to boot. Many more titles followed. However, the rumor of the game being named Final Fantasy because it was the game that saved Square from bankruptcy isn't true. It was originally going to be named Fighting Fantasy, but there was already a board game based off of a successful series of adventure books with that name, so they went with Final instead.

Originally released in 1987 on the Nintendo Entertainment System, the first port was to the MSX 2 released in Japan in 1989. A remastered version for the WonderSwan Color was released in Japan in 2000. The WonderSwan version was the basis for the 2002 PlayStation port as a part of Final Fantasy Origins and the 2004 Game Boy Advance port as a part of Final Fantasy I & II: Dawn of Souls. For the 20th anniversary of the Final Fantasy series, it was remastered again for the PlayStation Portable. There are also versions of the game for mobile phones.

The NES version of the game is available on the Wii Virtual Console and PlayStation 3 PlayStation Network (which can also be played on the PSP) worldwide, the NES Classic in North America and Europe (Japan got Final Fantasy III instead) and the Nintendo 3DS and Wii U Virtual Consoles in Japan.

The fighting game Dissidia Final Fantasy serves as a sort of prequel that gives events in this game more backstory and exhibition.

The popular webcomic 8-Bit Theater loosely (and how!) based its story on this game; the comic also pays homage to the fact that Square lifted many of the game's mechanics from Dungeons & Dragons.

Final Fantasy I contains examples of the following tropes: