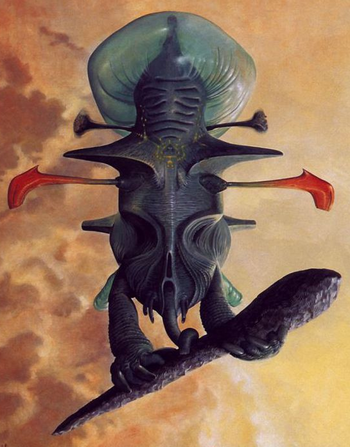 "Within range of our sensors, there is no life [...]. At least, no life as we know it."
— Spock, Star Trek: The Original Series, "The Devil in the Dark"
Advertisement:

Starfish Aliens are really alien aliens. They may have:

If the aliens in question have two or more of the above traits, you're usually dealing with a Starfish Alien. However they are still "people" in the sense of having:

Sometimes, however, they are too alien and their language, mind-set and culture remain incomprehensible to humans. Often (particularly if the beings can't communicate easily with humans) they will be presumed to be evil by the human protagonists without any actual proof. But in accordance with We Come in Peace — Shoot to Kill, starfish aliens who run across innocent, open-minded humans are themselves known to do beyond-horrible things to them, then excuse themselves later with an explanation that they were only trying to communicate with or greet us in the way they know how. Usually, their language and communication are so different from ours that if there is to be any communication between our species and theirs, it must be done by technological means of translation or them taking on a form humans can interact with. In an extreme case of varelse-class incompatibilities, there may exist no possible means of communication other than mutual destruction.

Given the long, strange history of life on Earth (a given house includes such a bewildering variety of life as humans, houseplants, pets, spiders, molds, bacteria, etc.), it's likely if we ever actually encounter alien life it might fit in this category. Species that evolve naturally would have adapted to solve similar basic problems: obtaining food/necessities, negotiating natural disaster, adapting to new circumstances, avoiding contamination by pathogens and parasites, competing with other species, competing with themselves, and so forth. So we would expect to find at least a few familiar aspects to their psychology as opposed to sheer indecipherable mystery... if they evolved in similar conditions as us.

These are much more common in animation, video games, and literature than they are in live-action media, due to the likelihood of Special Effects Failure. They are typically located towards hard science fictions, though when their biology becomes sufficiently improbable, they may soften it instead. When a story is told from the point of view of Starfish Aliens, and other decidedly non human creatures, it's Xenofiction.

Ironically, actual starfish belong to the phylum of echinoderms (along with urchins and sea cucumbers) and despite their utterly alien anatomy, are among the closest relatives to vertebrates in the animal kingdom. Arthropods, molluscs, earthworms, jellyfish, and sponges are all more distantly related by comparison.

Super-Trope to Octopoid Aliens. The inverse of Human Aliens or Rubber-Forehead Aliens. Aliens that don't look like humans, but still have basically the same body type are Humanoid Aliens, or Intelligent Gerbils, if they're obviously based off a particular Earth animal. Insectoid Aliens effectively split the difference.

Prone to enter Grotesque Gallery. May speak a Starfish Language. See also Bizarre Alien Biology, Starfish Robots, and Our Monsters Are Weird. Compare Eldritch Abomination (both tropes have some overlap). The Trope Namer is H. P. Lovecraft's At the Mountains of Madness, written in 1931, where the Elder Things are described as having starfish-like appendages.

Arguably the least humanoid species encountered on a casual basis, the Hanar are essentially giant floating jellyfish that communicate through bioluminescence.

Arguably the least humanoid species encountered on a casual basis, the Hanar are essentially giant floating jellyfish that communicate through bioluminescence.