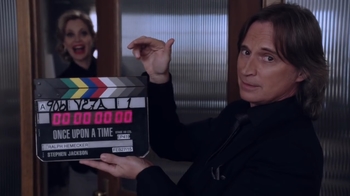 Outtakes from a pre-recorded show that someone deemed entertaining enough to stand on their own. Usually run over the credits of some Sitcom shows, but also a standard feature of the Clip Show, and sometimes included as extra material on DVDs.

Naturally, outtakes (sometimes also known as "bloopers", and professionally called a "gag reel"), are not always appreciated (or welcome) in all situations. Let's face it, at times it's downright embarrassing to screw up, and many actors feel that publishing a string of "goofs" is demeaning and makes them look unprofessional.note After all, how would you like your workplace to put your big mistakes of the year on the company website for all to see? Many directors don't want the tone of a drama changed by people remembering moments from the blooper reel when they watch the movie again. Peter Sellers is believed to have blamed the decision to include a gag reel to the end of Being There for his failure to win an Oscar for the film.

The viewers, however, love a good blooper reel. Everyone can identify with saying the wrong thing at the wrong time, or having to try something over and over again that is just not going right. Plus, with the general popularity of DVD and Blu-ray featurettes that pull back the curtain on film and TV production, outtake reels are considered a complimentary part of all that. Because of this many movies will toss in a blooper reel on the DVD, even if it isn't a very good blooper reel, and media in which outtakes are unlikely (such as animation) it's not uncommon for a reel of fake outtakes to be created from whole cloth — since these are created intentionally for comedic purposes, they're often even funnier. Most news stations run a blooper reel at the end of the year, and in this age of DVRs and Internet, many bloopers end up on YouTube before the nightly news is even over. TV shows and movies dubbed into another language always fall victim to these because the actors often need to perform to already-completed footage, which is difficult and heightens the chance of them royally screwing up a take. Bonus points if said actors have a background in improv and can make an outtake So Bad, It's Good.

Comedy series blooper reels aren't considered as "controversial" as those of dramas, since they often provide Funny Moments (see, for example, the extremely popular "Smeg Ups" videos from the making of Red Dwarf). They are also not considered so egregious for programs that are fantasy, SF or light-hearted in tone. Put another way, you're more likely to find a blooper reel for Doctor Who or Once Upon a Time than Saving Private Ryan.

There are also individual programmes made up entirely of outtakes, e.g. It'll be Alright on the Night (an ITV series hosted by Denis Norden), Auntie's Bloomers (taken from Auntie Beeb, an old-fashioned nickname for The BBC) and TV's Bloopers and Practical Jokes, a long running series hosted by Dick Clark.

Note that outtakes are not the same as deleted scenes: while outtakes consist of mistakes and flubbed lines, deleted scenes are removed from the final print for pacing or running time issues or because they either fall flat or simply don't add enough to the work to justify including them. However, it is common for the term "outtake" to be used to describe deleted scenes, and not uncommon for bloopers and genuine deleted scenes to be mixed together. A bunch of bloopers together are usually called a "blooper reel", even today when they were recorded digitally. A "gag reel" is similar, but usually is mostly the cast and crew goofing off. There is no hard definition, though, and the two terms are often used interchangeably. DVD Bonus Content will sometimes call what is a blooper reel a gag reel, and vice versa.

A Sub-Trope to Blooper. One of these can actually become a case of Throw It In, if the mistake is minor, nobody else breaks their composure, and the director decides to keep it.

Super-Trope to Animated Outtakes, for when an animated medium (or work featuring animation) includes purpose-created "bloopers".

They have become so popular, that "Samoflange" is often referenced in numerous other works, including the remake.

Outtakes and bloopers are seen in the closing credits, while the theme song by Jackie Chan plays.

Outtakes and bloopers are seen in the closing credits, while the theme song by Jackie Chan plays.