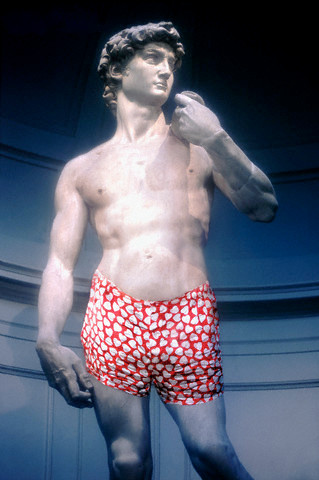 You know, the overly blatant portrayal of sexual symbols on this statue's underwear really goes against the grain!
"It's my job to protect you, the viewer, from reality."
— Fox Censor, a Fox network censor, The Simpsons
Advertisement:

To BowdlerisePronunciation "Bow" (as in "port bow" or "cow" minus c) plus "dler" (as in Schindler's List) plus "ise" (pronounced like eyes). Alternatively, those who know IPA: /ˈbaʊd.lə.ˌɹaɪz/. means to alter existing programs, plays, etc. so they are less rude and/or offensive. Commonly, this takes the form of swapping "curse" words for euphemisms. The term is used in a negative sense, by those who think the alterations are often done with a ridiculously high fear of lawsuits and/or need for political correctness. Sometimes it's understandable—different countries have different standards, and sometimes all it takes to change a show from something for teens to suitable for kids is the removal of a few swear words, darn it. Others are fairly reasonable for broadcast, such as toning down violence since Children Are Tender-Hearted. Such modifications are also understandable when the work is being adapted into a play that will be performed by kids, not just watched by them.

But true Bowdlerizing starts when you actually lower the quality of the art or story in some way in the editing, sometimes as little as spoiling jokes or perhaps making villains not look quite as evil, but escalating to damaging the plot, making dialogue confusing, and making heroes look pure and shiny. And at its very "best", it can make a situation less acceptable. In many cases (such as the airing of R- and NC-17-rated films on broadcast television or the release of sexual, violent, or edgy material in countries where such things are known to be forbidden), the viewer/listener/reader is often left wondering why a release in such a venue was even attempted.

Censorship starts at editing out blood splatter and profanity. But it escalates pretty quickly. Beer may become water even when it's adults drinking—even villainous adults. Cigarettes and cigars might be removed even though it's a bad guy smoking. A six-round revolver can become a water gun or slingshot. Then they start warping entire characters to the entire show so that a character is Ambiguously Bi, as if a good guy being gay might encourage kids to be gay—when ironically a good guy being bi might just encourage a kid to experiment. Then when a situation presents itself where death should be a given, it's always avoided or explained away, removing the idea of consequences stemming from dangerous activities. A girl hits a boy because he got her dirty, instead of because he might be groping her. A scene of a parent hitting their child is completely removed, making it look like they are running away over nothing.

Cultural Translation can often contain elements of Bowdlerization, especially due to Values Dissonance. See T-Word Euphemism for a mild form of bowdlerization. See also Cut-and-Paste Translation (which specifically refers to Bowdlerization in translated works and refers more to the final product than the process) and Disneyfication (which generally goes further, in not only removing content but adding new, "kid-friendly" content). See Bluenose Bowdlerizer for when it happens here on the wiki.

Tropes that often or always arise from Bowdlerisation include:

Kyle explains what "Bowdlerize" means through the lens of Gnomeo and Juliet.

Kyle explains what "Bowdlerize" means through the lens of Gnomeo and Juliet.