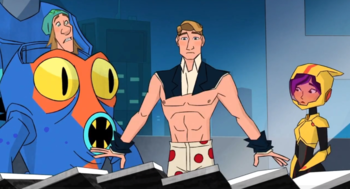 It Makes Sense in Context...

After the drama and tearjerking material from the movie, the series gives us some relief with hilarious moments aplenty.

Fred's continuous attempts at creating a secret identity for Baymax include:

Go Go tries teaching Baymax to roller-skate, in which Hilarity Ensues since he doesn't know how to stop.

Wasabi tries to teach Baymax some yoga poses. It goes as well as expected.

This short is about Baymax running out of power. That's all you need to know, but specific moments include:

Poor Wasabi getting the S1 villains as clients for his new part-time job as a super driver.

"The Fate of the Roommates"