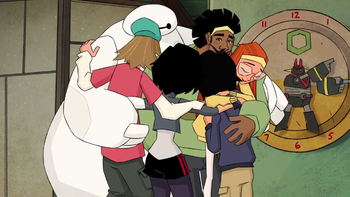 True Companions through and through.
Advertisement:

The series keep the movie's tradition going by giving you moments that makes your heart melt.

"Fate of the Roommates"

Mayor for a Day

The Dog Craze of Summer

Hiro: (after Rishi helps Hiro clobber the NBB family) Thanks for the assist, young citizen. With skills like yours, you must be a star student here at SFIT.