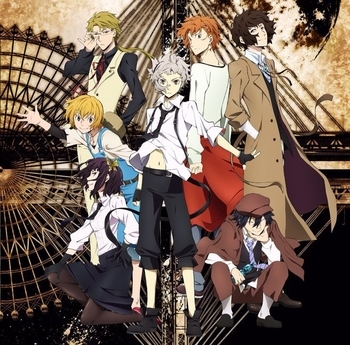 The pen is mightier than the sword.
Bungo Stray Dogs (Literary Master Stray Dogs) is a Seinen manga by Kafka Asagiri and Harukawa 35 (pronounced "Sango") which began serialization in 2012. The manga has also received an official ongoing English translation by Yen Press. An anime adaptation began airing in April 2016, followed by a second season in October that year and a third season in April 2019. Its official anime website is here

. In addition, the series is popular enough to spawn multiple light novel spinoffs, several stageplays, a movie in 2018 and an on-going smartphone game that has also received an English localization.
Advertisement:

Atsushi Nakajima is kicked out of his orphanage. To make matters worse, there are rumors of a tiger on the loose and when he gets to a river, starving and with nowhere to go, there's a guy committing suicide.

The man attempting suicide is Osamu Dazai, a member of the Armed Detective Agency. He and Doppo Kunikida are out to find the tiger before anything (casualties, damage or the large bounties for said tiger) gets worse. These two, along with all the people at the Agency, have supernatural powers and Doppo has a sneaking suspicion that Atsushi's part of the big picture.

Not only that, but every single character has a name that corresponds to an author of (a) famous literary work(s) and their powers are based around the works they're known for...one work, at the minimum.

The character design has a vibe of The Roaring '20s, but the story is set in present day Japan, Yokohama.

It has absolutely nothing to do with Bungo to Alchemist, Stray Dogs Howling in the Dark, or Stray Dog.

He then proceeds to kill every single soldier in the area.