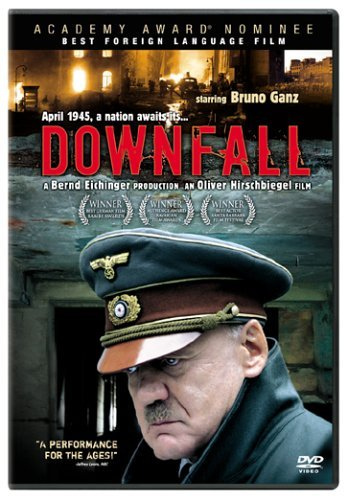 A mass murderer's final days.
"Tomorrow millions of people will curse me, but fate has taken its course."
—Adolf Hitler
Advertisement:

Downfall (German: Der Untergang) is a dramatic film from 2004 recounting the last days of Nazi Germany as the Red Army closes in on Berlin, when Adolf Hitler (Bruno Ganz) and the senior Nazi leadership that remained at his side waited around to die.

It is primarily based on the memoirs of Gertraud "Traudl" Junge (Alexandra Maria Lara), one of Hitler's secretaries, and is one of the most accurate portrayals of the last, desperate days of the Third Reich and its effects on the Führer, his closest aides, and ordinary Germans. Other POV characters in the film include Dr. Ernst-Günther Schenck, an SS doctor struggling to help the massive German casualties piling up as the Russians storm the city, and Peter Kranz, a small boy who has been turned into a Child Soldier with the Hitler Youth and sent to the front line.

The film is also known as the source of all those Hitler Rants videos, wherein the subtitles are edited to satirize all kinds of usually trivial topics. The scene

that is used for most of the Hitler Rants is actually a Hitler freakout that occurs after he learns that neither Wenck's 12th Army nor Felix Steiner's Army Group will be coming to the defense of Berlin. In Real Life, both forces were trying only to get West so they could surrender to the Western Allies, with Wenck's forces in particular trying to evacuate as many civilians as they could from the vengeful Red Army while slowing down the latter as much as they could. Other commonly used scenes include Hitler planning Steiner's counter-attack (the aforementioned Freak Out happens when he's told this can't be done), Hitler taking a phone call, Hitler eating dinner and learning that Heinrich Himmler attempted to have Germany surrender, and Otto Gunsche informing Hitler that Fegelein has gone AWOL.

open/close all folders
A-D
E-L
M-R
S-Z
"Of course the horrors, of which I heard in connection of the Nuremberg trials, the fate of the six million Jews, their killing and those of many others who represented different races and creeds, shocked me greatly, but at that time I could not see any connection between these things and my own past. I was only happy that I had not personally been guilty of these things and that I had not been aware of the scale of these things. However, one day I walked past a plaque that on the Franz-Joseph Straße (in Munich), on the wall in memory of Sophie Scholl. I could see that she had been born the same year as I, and that she had been executed the same year when I entered into Hitler's service. And at that moment I really realized that it was no excuse that I had been so young. I could perhaps have tried to find out about things."
— Traudl Junge
Feedback