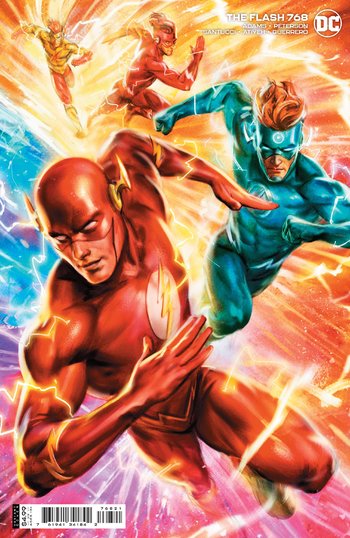 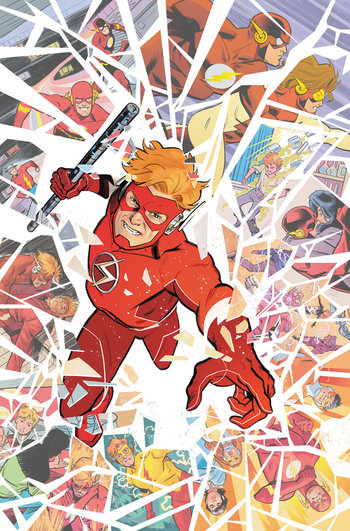 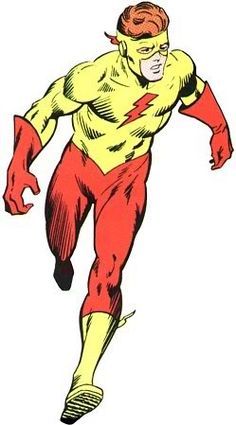 Wallace Rudolph "Wally" West is a DC Comics character first appearing in The Flash vol. 1 #110 (December 1959). Originally the Kid Sidekick of the second Flash, Barry Allen, Wally eventually took on the mantle himself and was the Flash of the main Post-Crisis continuity for many years.

As a child, young Wally West was the biggest fan of the second Flash. One summer, he went to stay with his aunt Iris in Central City, who was dating Barry Allen at the time. Barry then "introduced" the Flash to him, and the Flash then told Wally how he got his powers by setting up a cupboard of chemicals the exact way they were when he got them. In a huge Contrived Coincidence, lightning suddenly struck the chemicals and Wally was bathed in them, giving him the same powers as the Flash. The Flash then taught Wally everything he knew about Super Speed and gave him the identity of Kid Flash. The Flash later revealed he was Barry to his nephew another summer. Wally would later become a founding member of the Teen Titans.

After Barry's death in Crisis on Infinite Earths, Wally took up the Flash as his new identity. Wally was initially a shameless womanizer and a jerk to most people, albeit one with a loyal heart who more often than not sought to redeem and help his villains rather then simply beat them up. Still, he had much to learn, but some Character Development and his relationship with Linda Park made him a much more mature hero, even surpassing his mentor in ability. At the same time, he formed the Flash Family, consisting of himself, Jay Garrick, Max Mercury, Jesse Chambers and his cousin Bart Allen.

Wally fought a mix of villains, both those who had antagonised the previous Flashes, such as Jay's enemies Vandal Savage, the Thinker and the Turtle, as well as Barry's enemies, the Reverse-Flash and Abra Kadabra, but also many new villains of his own. Kilg%re, Savitar, Cobalt Blue, Neron, Zoom, Blacksmith, Wally added several new villains to the Flash's enemies list, which somewhat compensated for the fact Wally's charismatic nature and more open-minded view of crime meant he often befriended villains to the point they quit villainy. The Rogues, his uncle's old enemies, all collectively retired, with Captain Cold and Golden Glider becoming loose allies for a bit, and the Pied Piper becoming one of his best friends. However, with the exception of Piper, many of the Rogues slowly drifted back into crime due to finding difficulty getting honest work.

One of the biggest features unique to Wally among the other Flashes was just how much he changed and evolved as a character, which stands out in an industry that prefers characters to remain largely the same for the sake of new readers. Not only did Wally shift from a Jerk with a Heart of Gold to a snarky Nice Guy, as well as grow in power, he also grew from an unemployed college drop-out into, eventually, a married father of twins. Until Executive Meddling interfered, he was also the best example of Sidekick Graduations Stick and aversions of the Sidekick Glass Ceiling, as Wally had arguably surpassed Barry in icon status. His run had lasted more individual issues (though not actual years of publication), and he was featured in adaptations and even referenced in POP Culture as the real name of the Flash. Between the 90s to the 2000s, if the Flash appeared outside of comics, it was almost always Wally West (except in Smallville).

Wally's tenure as the Flash also saw one major change to the books: the introduction of the Speed Force, a Meta Origin and power source for (almost) all heroes with Super Speed. The Speed Force was explained as what granted them their super-speed and all the Required Secondary Powers needed for it to make sense in the first place (replacing several previous Handwaves that were not as encompassing or up to snuff scientifically), and by understanding it, Wally was able to both reach greater speeds (surpassing any previous speedster), but doing so came at a grave risk of merging with the Speed Force itself. Wally alone was able to resist this through The Power of Love for Linda Park, but even still it made pushing himself a daunting risk.

Wally disappeared during the early years of the New 52 reboot of the DC Universe. It initially seemed that Wally was reintroduced with a Race Lift and Age Lift into a young African-American teenager, but when the original Wally returns in DC Rebirth, the New 52 Wally was retconned as his identically-named cousin. To avoid confusion (in as much as that's possible at this point) this character now goes by Wallace.

After Flashpoint, Wally was still the first Kid Flash, though he was forgotten by the world. This is revealed to be because of Abra Kadabra, who remembered the pre-Flashpoint timeline and wanted revenge. Wiping the world's memories of Wally, Kadabra banished Wally into the Speed Force. Managing to hold onto his identity, Wally also learned of the alterations to the DC Universe's timeline, seeing someone alter the universe to its current state after Barry fixed Flashpoint. This also led to him gaining some of his pre-Flashpoint memories and powers. However, Wally couldn't reconnect to the New 52 Universe until Darkseid's death. Reality was cracked for a moment as a result: and in DC Rebirth, he uses this opportunity to warn the world's heroes about a menace who stole ten years from their lives and changed the world into a Darker and Edgier place. Thanks to Barry's help, Wally is now completely back and determined to save the universe!

The events of Rebirth were unfortunately not kind to the returning Fastest Man Alive. While he remembered his relationship to his wife Linda Park, she did not, and thus he was stuck loving a woman who didn't feel the same way. What's more, he was then cruelly informed of details he didn't remember, namely that his children with Linda, Jai and Iris. His quest to find his children led him into conflict with Barry, but after having a nervous breakdown over it, Barry took Wally to Sanctuary, a mental hospital for superheroes. This didn't help, and another mental breakdown caused by the poorly conceived therapy treatment resulted in an accidental discharge of the Speed Force which killed several heroes, including Wally's friend, Roy Harper. Manipulated by Eobard Thawne and having a psychotic episode, Wally tried to cover up the accident long enough to kill himself, but was talked down before he could.Believing himself a Fallen Hero unworthy of redemption, Wally let himself rot in prison until he was recruited to save the multiverse, which ended in what Wally believed would be a Heroic Sacrifice as he became a New God. However, he was robbed of this power by the Batman-Who-Laughs, and so Wally returned to rejoin earth's heroes in fighting him off. For Wally's efforts in stopping the mad Dark Knight, he was rewarded with the return of both his families, reuniting with Linda and the kids, and with his fellow speedsters, the Flash Family.

After all this, Wally has been given a second chance by Barry choosing to step down as Earth's Flash to assume a new duty for the Justice Incarnate, trusting Wally to be the sole Flash of the DC Universe. Now, once more Wally West truly is back as the Fastest Man Alive.