Devoted to keeping the peace, protecting nature, and serving the people, the Pokémon Ranger Union employs people from across the globe. As a form of law enforcement, a Pokémon Ranger is equipped with a Capture Styler designed to calm down and recruit wild Pokémon, and has the authority to pursue and capture criminals who would endanger Pokémon or people. 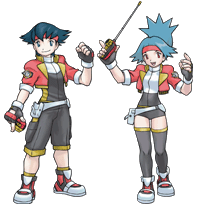 The player is offered a choice of gender, with males playing as Lunick and females playing as Solana. Whichever the player chooses is a new Ranger being employed in the land of Fiore. The one you don't choose instead serves as a friend and partner.

The head researcher of the Ranger Union, he is known for being impatient. He invented the Stylers that the Rangers use. He has appeared in all three games so far, a title held by only a few others.

A somewhat slow guy, he was originally a Ranger in Fiore with a Slowpoke as his partner Pokémon. Eventually, he became the PR head of the Ranger Union. In Guardian Signs, he is deployed to Oblivia on The Union to assist the player. 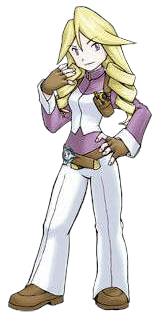 A fellow ranger in Ringtown. She's abrasive and smug to those around her, but she has a kinder side she doesn't like to show.

A Ranger working under Elita. He's a pretty quiet guy, earning him the nickname "Silent Chris". 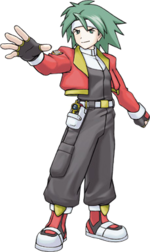 The leader of the Ringtown Rangers. His partner Pokémon is a Fearow.

The leader of the Fall City Rangers. His partner Pokémon is a Dodrio.

The leader of the Summerland Rangers. His partner Pokémon is a Pelipper.

The leader of the Wintown Rangers. Her partner Pokémon is a Skarmory.

A gang of scoundrels with a bad fashion sense and an odd obsession with music. Their objective is known only to the top brass, but they have been controlling wild Pokémon in the Fiore region and causing mischief, and as such must be taken down by the Ranger Union.

The leader of the Go-Rock Squad and one of Professor Hastings' former colleagues. By stealing and improving upon Professor Hastings' Super Styler design, he intends to control legendary Pokémon and unleash them on Fiore, so that he may then present himself and the Go-Rock Squad as heroes by stopping them. He bears a strong grudge against the Ranger Union and wants to drive them out of the region and replace them. 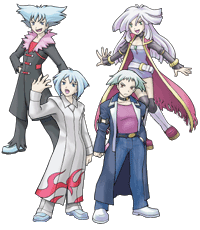 From youngest to eldest, Tiffany, Clyde, Garrett, and Billy. The sons and daughter of Gordor, they act as his main enforcers. Apparently, being related to the boss is the only way one can get a promotion in the Go-Rock Squad... After the collapse of the Go-Rock Squad, they decide to go straight and become a famous band. 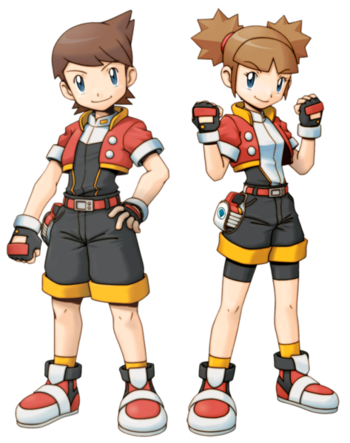 Like the game before it, Shadows of Almia also offers the player a choice of male or female. Unlike the last game, the gender not chosen does not become a separate character, and simply doesn't appear. Kellyn is the male, while Kate is the female.

A fellow Ranger-in-training who serves as a rival of sorts early in the game, before becoming a Top Ranger alongside you.

A young woman attending the Ranger School in hopes of becoming an Operator. She, along with Keith, serve as your friends.

One of the Rangers assigned to Vientown along with the player. He's lighthearted and provides a degree of levity.

Another Ranger assigned to Vientown. She accompanies the player on a few missions.

A mechanic working in the Vientown Ranger Base. She's fond of taking machines apart.

The local Ranger leader you work under for the first half of the game. Even after graduating out from under his command, he remains a close ally and friend.

A strange, oil-soaked man found at the site of a forest fire. He never gives his name, and is instead referred to by a nickname referencing his oily first impression.

A Top Ranger under the Ranger Union. Though he has seniority over you, he quickly takes a liking to you and Keith.

Another Top Ranger. Wendy is known for flying around on her Staraptor more than other Rangers tend to do. In the special mission focused on Dialga, you and Wendy wind up stuck in the past.

The top authority of the Ranger Union, she runs everything. She is also the childhood friend of Professor Hastings.

A young genius who attends the Ranger School with you. After graduating, he goes to work for Altru Inc., but soon finds himself caught up with Team Dim Sun at the oil field.

Another squad with the technology to control Pokémon, Team Dim Sun seeks to put every Pokémon in the Almia region under their command. In reality, Team Dim Sun is a front for Altru Inc.'s goal to find a better energy source than oil; namely, enslaved Pokémon.

The first of the Sinis Trio, Dim Sun's top three enforcers. Ice is cool and mocking, and even more intelligent than he puts on.

The second of the Sinis Trio, and head of the Crimson Unit. Like her name suggests, she mainly focuses on a fiery theme. 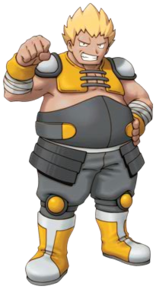 A large, foreign man who serves as the third of the Sinis Trio. His odd speech patterns and unusual sense of humor may catch you off guard, but he's quite competent.

Click here to see him in his Dim Sun uniform.

An eccentric teacher at the Ranger School. He has no patience for students running in the hallways, and works on odd research projects in the school's basement. In reality, he's a chief enforcer of Team Dim Sun, second only to Blake, and took the teaching job to try and scout impressionable students to Team Dim Sun.

The current president of Altru Inc. His goal is to find a better energy source than oil, his company's primary resource. Astute players will notice the seemingly infinite amount of oil Team Dim Sun has access to and make a connection. Indeed, Blake is the one funding and leading Team Dim Sun. His birth name was Wyatt Hall.

The previous president of Altru Inc., and Blake's father. All that's left of his legacy is a painting in the Altru building and a shack where he spent his days digging for oil.

The Pokémon Ranger Union and Allies 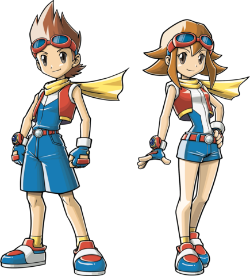 The two choices of player character. Like in the original, the one not chosen becomes an important NPC who spends the first half of the game in captivity but soon joins you as a frequent ally. 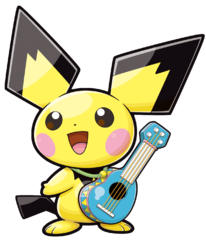 One of the Pichu native to Dolce Island. This one holds a toy ukulele that Booker built, and plays it by sending electric charges through it. After you help it out and rescue its friends, it sticks with you as your partner Pokémon.

An elderly woodcarver who built everything from ukuleles to bridges to the Ranger Union's flagship. He rescues you from Dolce Island early on and helps you out with any repairs needed for bridges or boats.

Booker's apprentice. He's a bit of an airhead and Booker is not afraid to tell him such, but he's responsible and dilligent.

The only Ranger assigned to the usually-peaceful Oblivia region. He has a wife, Leanne, and a daughter, Nema.

Rand's wife, and a well-regarded archaeologist. She spends much of the game decrypting odd artifacts or books you bring her, and helps uncover the truth within the legends of Oblivia.

Rand and Leanne's daughter. She's a technological genius ahead of her time despite her age. Somewhat impulsive and stubborn, but nevertheless a very helpful ally. She helps upgrade your Styler.

A band of poachers that have been capturing Pokémon left and right across Oblivia. Their primary targets are Articuno, Zapdos, and Moltres. Some Pinchers have found old suits of Steelhead armor in Oblivia's ruins, which grant them even stronger control over Pokémon.

A prominent figure and one of the leaders within the Pokémon Pinchers. He shoots you down at the beginning of the game and remains a constant thorn in your side for much of what follows. He's not all that bad a guy, and after leaving the group he thinks things over and helps you out a few times in the post-game.

Another boss of the Pinchers, Blue Eyes crosses your path several times. In an unusual aversion of Villain: Exit, Stage Left, you capture and retain her after your first encounter and, while she's released later, things never go well for her following that.

A young woman with an affinity for bird Pokémon. Her main purpose is to summon any Pokémon you befriended in the sky to be used on land.

A shady third boss of the Pinchers, who isn't really revealed to even exist until later. He's both Red and Blue Eyes' superior, and the head of the Pokémon Pinchers. He is employed by the Societea, but after being disbanded seeks revenge.

Forty years ago, a band of thieves called the Societea looted and plundered all manner of riches across the world. They are now too old for that, but upon learning the legend of the immortality-granting Golden Armor and powerful Sky Fortress, they reunited for one last job — eternal life and the whole world. To this end, they founded and financially back the Pokémon Pinchers.

A doctor living in Oblivia, he wanders the region making house calls and visiting his friends. 40 years ago, he and three of his friends were a band of thieves known as the Societea. Fearing death, he reunited with the other three and began pursuing immortality and world domination.

A lumberjack living on Renbow Island, he is immensely strong and protective of Raikou's shrine. He is also a friend of Dr. Edward. In the Societea, he was their brawn. 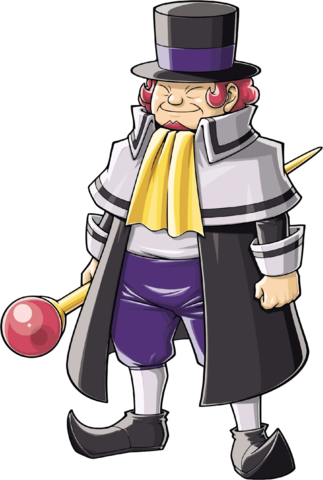 A magician living in Tilt Village, he puts on magic shows for the local kids. He also enjoys sipping tea with Dr. Edward and friends. He was part of the Societea, and was the crafty one.

A fashionable old lady living in Oblivia, she seems to be a friend of Dr. Edward. She was and still is a disguise artist, and was part of the Societea.