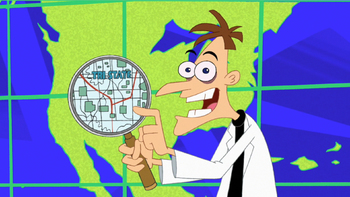 "Tri-county area" (sometimes "tri-cities" or "tri-state area") is a universal description for a generic American region that's meant to be larger than a small town, but not a huge metro area. A tri-state area is somewhat smaller in landmass and population than regions like the US Eastern Seaboard or the British Home Counties (which border London). Think Everytown, America on a slightly larger scale.

This trope is Truth in Television for a couple of reasons. In the 18th and 19th centuries, the people who created American political jurisdictions had a tendency to use rivers as boundaries; those rivers also served as arteries of commerce, so that urban areas grew and expanded across political jurisdictions. In addition, on the East Coast of the US, every state began from initial colonies on the Atlantic Ocean, meaning that, initially, state boundaries were drawn so that states could have access to the Atlantic Ocean or the Gulf of Mexico, no matter how small (see: New York State, Pennsylvania, Alabama, and Mississippi's tiny coastlines).

People who live in these places frequently reside in one jurisdiction and work/attend school/socialize in another, forming a looser proximity community in addition to the existing cities. Later on, media outlets (newspapers, radio and local broadcast television stations) covered these proximity communities as their beats, in part because there were limiting factors, such as wealth, population and a small number of government-issued broadcast licenses. Combining neighbouring cities for social purposes also produces larger talent pools for things like sporting events (say, a tournament between teams from several high schools in the area) and cultural performances (band or choral contests, or forming an amateur theatrical company or symphony orchestra).

Sometimes this trope is used to mock the person using it as part of an Overly Narrow Superlative, including implications of a big fish in a small pond talking up the size of the pond. In reality, most of the "tri-state" references don't refer to the entirety of the three states involved, which underpins this mockery. Also, counties aren't generally very large, so even putting together three counties doesn't add up to a major population center.

The other major use of this trope arises from the practice of organizing emergency services around cities, counties and states. If something big threatens a proximity community (a fleeing felon or a marauding monster or a major storm), the authorities in multiple jurisdictions must be called and their actions coordinated. Invoking this trope can indicate the severity of the threat, much like the proverbial "five-alarm fire". If a blizzard hits, expect local news and weather reporters to say things like, "Downed power lines and limited visibility are affecting the entire tri-state area." In fictional works, characters may be depicted reacting to such local news reports, or they may use the phrase themselves when warning someone else, be it a loved one or a person in authority.