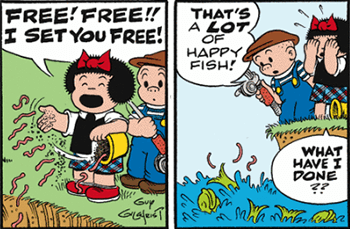 "What have I done? Sweet Jesus, what have I done?
Become a thief in the night, become a dog on the run?
Have I fallen so far, and is the hour so late,
That nothing remains but the cry of my hate?"
— Jean Valjean after robbing a priest who had just given him shelter, Les Misérables
Advertisement:

A well-intentioned but misguided character — very likely a Tragic Hero, a Tragic Villain or Anti-Villain — comes to realize that their actions have caused incredible damage, physical pain, emotional pain, or even loss of life. The usual line that comes after this is the title of the article (with or without the "My God"). Tears of Remorse may accompany it.

Usually delivered dramatically, sometimes, well, over-the-top. A villain might utter this line if they're about to take the Last-Second Chance. Or a hero after being freed from The Virus, being Brainwashed and Crazy, or a Superpowered Evil Side, or after making an unintentional but catastrophic mistake.

Sometimes followed by Must Make Amends, other times by an Ignored Epiphany. This trope is almost always the cause of The Atoner's Heel–Face Turn with the memory used as a constant reminder of why they must follow the path of atonement. Can also lead into He Who Fights Monsters or a Guilt-Induced Nightmare.

These Hands Have Killed is related but distinct, because it can be a reaction even to a justifiable killing.

See also Screaming at Squick and Bleed 'em and Weep.

Often the result if the protagonist becomes an Unwitting Pawn. Sometimes combined with Heroic BSoD or Despair Event Horizon; common with Villainous BSoD. Can be a self-inflicted What the Hell, Hero? Contrast I Did What I Had to Do, Be All My Sins Remembered, and I Regret Nothing. Compare It's All My Fault, Heel Realization and Kick the Morality Pet. See also Out, Damned Spot!, Being Evil Sucks, Nice Job Breaking It, Hero, and Sympathetic Murder Backstory. This sort of moment is often why a Regretful Traitor feels that regret. If it's done by two or more characters who are fighting, then it's Dissension Remorse. May be the result of an all too successful Pygmalion Plot to Teach Him Anger. When a work tries to deliberately invoke this as an audience reaction, that's You Bastard! (whether it's successful or not). Although they are not related, it's possible to overlap with What Have I Become? If "My God" is taken literally, it may lead to a Heel–Faith Turn.

Sasha returns to the Plantars' now-abandoned house, finding Anne's journal in her old room and flipping it to the last page, wherein Anne is hopeful after the Battle of the Bands and feels like she can trust Sasha again. This helps Sasha to see just how badly she betrayed Anne's trust and convinces her to be a better person.

Alternative Title(s): What Have I Done

Sasha returns to the Plantars' now-abandoned house, finding Anne's journal in her old room and flipping it to the last page, wherein Anne is hopeful after the Battle of the Bands and feels like she can trust Sasha again. This helps Sasha to see just how badly she betrayed Anne's trust and convinces her to be a better person.