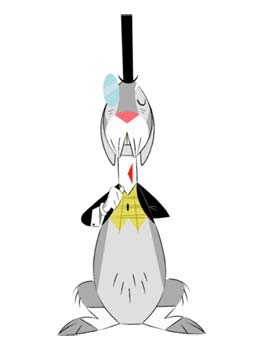 Good luck telling this guy to lighten up.note Actually, Bloo succeeded once. It did not end well.
"No hugs, dear. I'm British. We only show affection to dogs and horses."
— Jocelyn Dashwood, What a Girl Wants

The American media often presents people from Britain as overly stuffy and conservative, to the point of being uptight and unable to cope with breaks from the way they believe things should be.

Of course, one need only watch modern British television, with its abundance of drama and open-mindedness, to see this trope averted. Not only averted, but in many cases, inverted. However, rationality in the face of adversity is a British virtue. The British sense of humour can also form a stumbling block; in many cases, it tends to work on ironic understatement and dry wit that can easily fly under the radar of people who aren't used to it.

Compare with Quintessential British Gentleman. Contrast also with Evil Brit, who is often Wicked Cultured and hence more open-minded, whereas the Stuffy Brit may be a protagonist, but is portrayed as merely temperamentally handicapped. Not to be confused with the Mean Brit, who is snarky and gregarious.

When up against an American for his love's affections in an American work of fiction, expect him to be a Jerkass suitor (assuming she won't Lie Back and Think of England), because All Girls Want Bad Boys. But in the end he'll Just Want Her To Be Happy. For the more positive variant, see Stiff Upper Lip.

This trope also applies more specifically to upper-class British people, and middle-class people who aspire to be like them. Lower-class Brits will often be rowdy and bawdy - unless their Nonconformist or Evangelical religious beliefs are being played up.

It's worth noting that there's something of a continuum of National Stereotypes involved with this trope. Americans themselves may be portrayed as the stuffy ones when contrasted with anyone from the Mediterranean or the Middle East. For the British, the "comically uptight" stereotype often goes to the Germans, and once upon a time to the Japanese.