Characters / Stories and Tales from Dimension 63

Please note that this page is for tropes for characters introduced in the fanfic, or apply differently to existing characters.

And remember, be wary of unmarked spoilers! 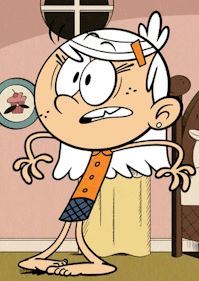 Lincoln Loud of Dimension C-137 and the version that stars in the show, who after a short but enlightening visit to dimension 11B is knocked off course on his way back to his home reality and finds himself, or rather 'her'-self with an entirely different kind of problem.

For tropes concerning Linka, see their entry under Spoiler characters.

The Loud Family of Dimension 63i'\:

Lori's counterpart, and the military leader of the boys.

Luna's Counterpart and Lincoln's Secret-Keeper through the "Revelations" arc.

Lucy's Counterpart and a storywriter.

Lisa's counterpart and a fan of Sci-Fi.

Other notable characters from Dimension 63:

An organisation dedicated to preserving the multiverse by preventing the spread of anomalies... no matter what it takes.

A hunter from dimension CX-135, and the first hunter encountered.

Commander and head honcho of the Anomaly Elimination Unit, and a counterpart to Lincoln Loud.

Mysterious, otherworldy being who appears to Lincoln shortly after he becomes stranded in another world, in order to help him return home.

The real Linka Loud who due to an accident ending up swapping bodies and realities with Lincoln.

Ethioth
The guardian of fate, and apparently the boss of the anomaly hunting organization. He eventually takes the Louds and Lincoln to his domain after defeating William.