This is a listing for characters associated with the Centauri Republic that appear in the Science Fiction series Babylon 5. Visit here for the main character index.

In General
I want my people to reclaim their rightful place in the galaxy. I want to see the Centauri stretch their hand and command the stars. I want a rebirth of glory, a renaissance of power.
Advertisement:

Emperor Turhan
Played by: Turhan Bey
It has occurred to me recently that I have never chosen anything. I was born into a role that had been prepared for me. I did everything I was asked to do because it never occurred to me to choose otherwise. And now, at the end of my life, I wonder what might have been.
Emperor Cartagia
Played by: Wortham Krimmer
One of our very best torturers. I felt certain he would break him. Two hours he worked. Not a sound! I said, 'Give me a cry, give me a shout, a whimper, a scream'. Silence! So, I got into it myself. You can't leave these things to others, they never get it right.
Regent Milo Virini
Played by: Damian London
""Once I would've thought pastels for the curtains, but I think we are well beyond pastels now. No, no bright colors anymore, just darkness."

The regent of the Centauri Republic after Cartagia's death. 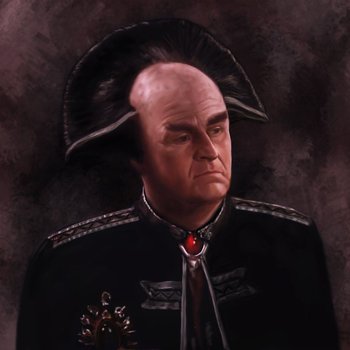 Played by: Stephen Furst
Londo: There is still hope for you...and for that I find I still envy you.

A nobleman and an old friend of Londo's. When his family is disgraced in Centauri politics he provokes a duel with Mollari to ensure that after his death Londo will care for his family according to the customs of Centauri duels.

A slave, and Londo's one true love.

One of Londo's three wives.

The daughter of a powerful Centauri noble, Lord Drusella