This is a listing for characters associated with the Minbari Federation that appear in the ScienceFiction series Babylon 5. Visit here for the main character index. 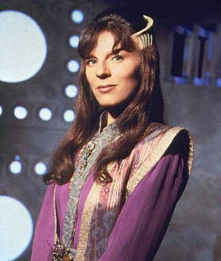 Played by: Mira Furlan
"We are star stuff. We are the universe made manifest, trying to figure itself out."
Delenn: And I wonder, "Did I do this, when I broke the Grey Council?"
Lennier
Played by: Bill Mumy
"Where you will walk, I will walk. I have sworn myself to your side."
Alyt Neroon
Played by:John Vickery
"You talk like a Minbari, Commander. Perhaps there was some small wisdom in letting your species survive."
Draal
Played by: Louis Turenne (first appearance), John Schuck (all other appearances)
"I am never alone: my thoughts are always among the stars."

Delenn's old mentor and teacher. He takes over as the heart of the Great Machine on Epsilon III.

Advertisement:
Dukhat
Played by: Reiner Schone
"Authority should never be used as a club, Delenn."

He was the Chosen One, the leader of the Grey Council. His death by humans hands lead to the Earth-Minbari War.