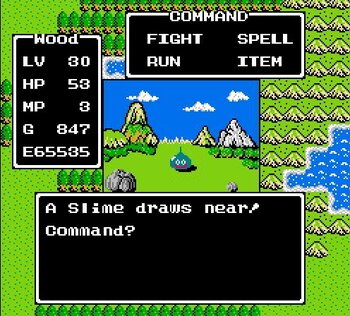 "For when I want all the freedom of having a story revolve around my choices without being confined by the choices of either going to work or starving."
— Kyle Martin
Advertisement:

Role-Playing Games (RPGs for short) are a genre of Video Games in which the player controls a character or party of characters in a statistically abstracted way. Most are based around one or more quests, items, stats, Character Customization, and experience points, as characters grow in power over time. While RPGs are a diverse genre, they are all defined by the core reason why people play them, namely, the desire for a sense of achievement that does not (usually) require an intense commitment to mastering them. To this end, most RPGs give you easy checklists to tick off (like side quests) at your leisure and clear success metrics and rewards (like leveling up), and also let you tune out and come back at any time. Another way a lot of RPGs engage players is by satisfying their desire to watch their characters grow as the game progresses (both in power and as people).

RPGs have their origin in pen-and-paper systems which traditionally have dice-based combat and character generation, descended from a combination of tabletop War Gaming (such as Chess and Go) and collaborative theater. Dungeons & Dragons was the first such system to be sold, followed by other early systems such as Empire of the Petal Throne, The Fantasy Trip, Space Opera RPG Traveller and Tunnels & Trolls. These type of role-playing games are now known as Tabletop RPGs.

It is debatable whether any actual "Role Playing" is involved in many "role-playing video games". See also Role-Playing Game Terms, How to Play a Console RPG, and PC vs. Console.

For the trope about assuming roles in order to practice something, see Comic Role Play.

Tropes that are commonly found in Computer Role Playing Games: