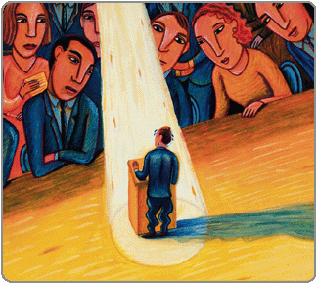 At least he's not in his underwear...
"See the man with the stage fright
Just standin' up there to give it all his might
He got caught in the spotlight
But when we get to the end
He wants to start all over again"
— The Band, "Stage Fright"
Advertisement:

A character has an ability that they cannot show off to or use in front of others because of nerves. When under pressure, the character can't perform as well, making others doubt that character's ability.

Usually, once under pressure, the character is unable to perform at all, looking like a complete idiot as they stand there unable to do what others are asking them to do. Other times, it has a more mild effect, causing them to simply make stupid mistakes that they wouldn't any other time.

The trope name is a more technical term for Stage Fright (see Real Life examples below). The specific phobia of public performing may appear on its own, or may be part of a broader case of social anxiety.

A common trait of the Shrinking Violet. If all we ever see is the character cracking under pressure, then it starts to edge into Informed Ability territory. Compare Centipede's Dilemma (aka Paralysis by Analysis), in which a character loses an ability by thinking too hard about it. Related to Dead Air, an occasional occurrence on radio. If the character is shown to actually be good at whatever it is they're attempting to do in public when they're in private (or doing it for friends/family), it usually goes hand in hand with Hidden Depths. See Imagine the Audience Naked and "No Peeking!" Request as possible ways of handling it.

Sean is sure it won't be any pressure to sing in front of everyone, but when it comes time to actually do so, he just freezes

Sean is sure it won't be any pressure to sing in front of everyone, but when it comes time to actually do so, he just freezes