A list of characters from Kyo Kara Maoh!. Beware of unmarked spoilers, as usual. 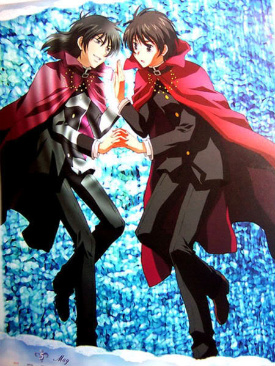 He was an Ordinary High-School Student until the day a couple of bullies decided to flush his head in a toilet. Suddenly, he was transported to a different world where he was the Maoh. Although he took a while to get used to his new settings, he learns to rule this his kingdom, with the help of his friends.

Being unaware of the demon kingdom's customs, Yuuri gave Wolfram a slap across the face for insulting his mother. Unfortunately, this was a way that nobles would propose marriage to one another, leaving poor Yuuri in an engagement that he never meant to be a part of.

Whenever Yuuri's life or the life of one of his close friends or even the life of an innocent bystander is in trouble, Yuuri's demon side surfaces and uses water created from maryoku to serve justice to the attacker.

Yuuri has a very naive and idealistic personality. He believes that everyone should be trusted, even if they've betrayed him already and that no life is beyond redemption. In a way, it's a good thing, as he manages to become very popular in his kingdom. However, he often is taken advantage of because of this gullible and foolish behavior, which is where his helpful friends and demon side come into play. 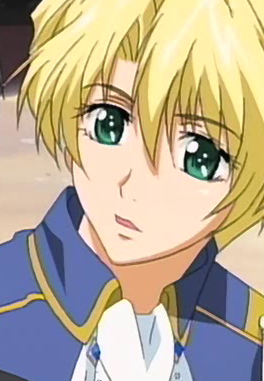 Yuuri's fiance and quite possibly his more cynical Foil, Wolfram is a demon who can manipulate fire. Near the beginning of the series, he is rather immature and arrogant, acting very spoiled and causing the Maoh's other attendants to give him nicknames like 'Little Lord Brat', but over the course of the series, he matures. Although he did not approve of being the Maoh's fiance at first, he changes his mind when Yuuri's demon side kicks his butt in battle. He soon grows very protective over Yuuri, yelling at anyone who comes too close to him. He is especially jealous of Conrad.

Wolfram can be very impatient and tends to rush into battles head-first. He can be impulsive with his decisions, especially in battle and believes that being the strongest is the way to win. He is also very proud of his Mazoku blood, convinced that it makes him superior to his brother Conrad or any other person with human blood in them. 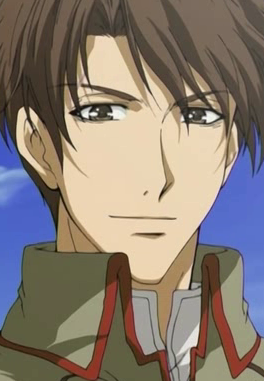 When Yuuri is found by Adalbert during his initial arrival to the demon world, Conrad jumps in to save him. Because he is kind, understanding and loyal, he gains Yuuri's trust very quickly and becomes quite close to him. Conrad is usually the one that Yuuri will talk to when a problem arises and Conrad will also be first person to save Yuuri if there is any chance of danger.

Although Conrad is rather mature, he sometimes forgets that other people care about him quite a lot and therefore runs off on his own to complete missions that might put him in danger. Usually, the rest of the group (or at least part of it) catches up to him and reminds him that there's no need to go on your own. In a way, this attitude of his contrasts Yuuri's, who would prefer to convince his friends to join him on missions. His actions also cause much confusion between Yuuri's subjects, however, he always believes that he is helping Yuuri in the best way that he can.

Yuuri will refer to Conrad as his godfather, as Conrad is the one that gave him his name. 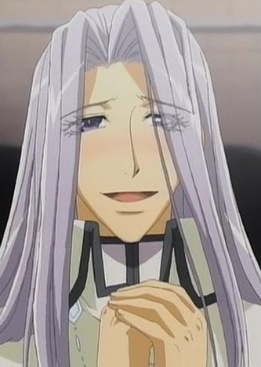 Gunter is the man in charge of teaching Yuuri while he's in the demon kingdom. In other words, he's Yuuri's private tutor, who Yuuri spends much of his time trying to avoid, for obvious reasons. Nevertheless, he's quite competent in his job, and is very determined to make sure that Yuuri is as educated as he could possibly be for the real world.

At first, Gunter seems a little like an idiot, or perhaps more like a teenager girl in love. He tends to be rather overprotective of Yuuri, fussing over every little thing and freaking out whenever he goes missing. Supposedly (at least in the manga), Gunter was actually quite the organized, professional man before he met Yuuri. Just goes to show you, doesn't it?

Outside the castle, Gunter is actually quite a good fighter. He is extremely good with a sword and being of demon blood, has his own magical abilities. 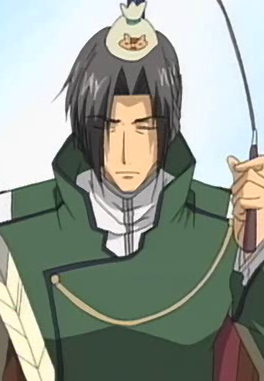 The most aloof and mysterious of Yuuri's subjects, Gwendal first doubts Yuuri's ability to lead the kingdom. After Yuuri summons the Maoh's spirit and defeat's Wolfram, Gwendal realizes that Yuuri is the true king. He's more logical and less compassionate than the other members on Yuuri's team, which leads him to disagree with Yuuri on a lot of decisions. Still, Gwendal always respects Yuuri's authority, giving Yuuri advice when he asks for it and aiding Yuuri in plans he might not completely agree with. As a very professional and stiff man, Gwendal seems to have very little interest in useless conversations and relationships in general, making him initially difficult for Yuuri to get along with. However, they soon learn to get along with each other, although Gwendal will occasionally reprimand Yuuri for making naive or foolish mistakes.

Gwendal has a love for small, cute things. Usually, this refers to animals such as kittens, dolphins and Bearbees. His personal office is filled with stuffed animals that he knitted on his own. It's stated that Gwendal began knitting because his childhood friend Anissina gave him lots of stress. 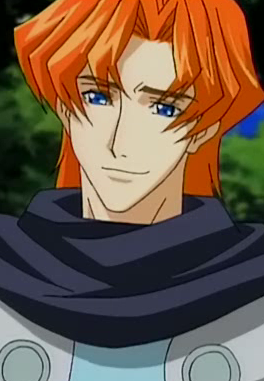 Josak is a spy in the Demon Kingdom army who is half-demon, half-human. Conrad's father rescued him from the human lands when he was little, and since then Josak and Conrad have been close friends and faced many dangers together. He is a master of disguise and has been known to pose as a woman on various missions. He even carries a dress along with him at all times for good luck.

Josak is very comical and expressive, facing every situation with light-heartedness and funny quips. He often does this to hide his own feelings, particularly anger and resentment at the treatment of half-humans such as him. While he is close friends with Conrad, they often don't see eye to eye which can lead to arguments or even physical violence. However, in the end, he tends to go along with whatever Conrad wants, since he is the superior officer.

At first, he seems a little skeptical of Yuuri's ability, and his harsh commentary causes Yuuri to become less confident in his abilities. However, Yuuri decides to trust him with the jewel that powers Morgif, believing that Josak will do with it whatever is best for the kingdom as a whole, and this gesture earns him Josak's loyalty. 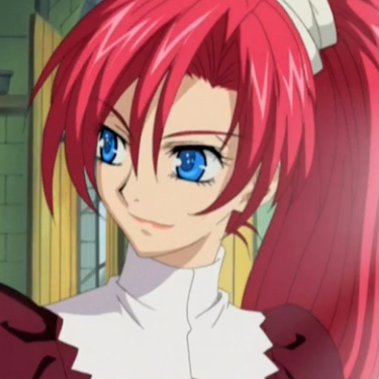 A head-strong woman filled with lots of ideas for inventions that are usually ridiculous, or have a ridiculous way of being powered. Anissina seems to think women are the future of the kingdom, with men being too reckless and incompetent to do anything well. Regardless of this, she is rather fond of Yuuri and does her best to help him... whether that is good or bad.

Whenever she has a new invention, she tends to force Gwendal to try it, or if she is unable to find him (as he usually hides from her), she has Gunter try it. Her inventions never seem to work out the way she wants them to. It's revealed that she and Gwendal grew up together, and that she was the one to teach Gwendal how to knit, although she doesn't believe that Gwendal has any talent in the field.

Greta is very fond of Anissina and seems to look up to her like an older sister. 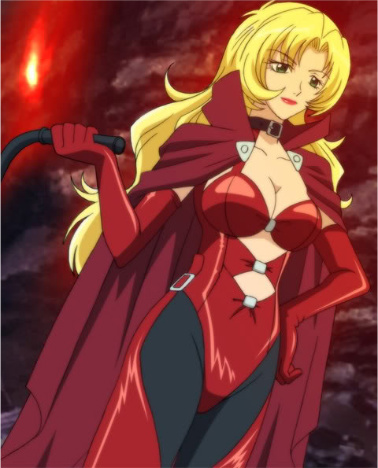 She first appears as a 'sexy queen' that Yuuri accidentally stumbles into in the private bath. Turns out, not only is she the previous Maoh, but she is also the mother of Gwendal, Conrad and Wolfram. All three of them have different fathers and Cecilie always seems to be on a 'search for love'.

Cecilie is very flirty and affectionate, even to her own sons. She loves to hit on Yuuri whenever she can (even though it pisses off Wolfram) and later hits on Yuuri's brother when he arrives, despite having a boyfriend. 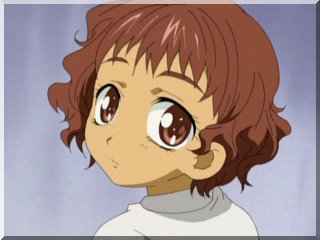 The adopted daughter of Yuuri and Wolfram. 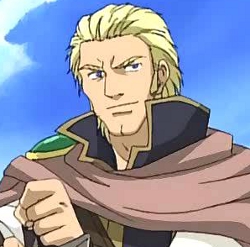 Adalbert shows up in the very first episode, where he rescues a clueless Yuuri from being stoned to death by frightened human villagers, and uses his magic powers to awaken Yuuri's ability to speak the local language...after which Yuuri is promptly rescued from Adalbert by Conrad. A man of mysterious motives, he defected from the demon kingdom in favor of the human nations, believing them fools for blindly following the will of their ancient king. Despite his anger toward the demon kingdom in general, and Conrad in particular, he's about equally likely to be on their side as that of their enemies when he shows up. 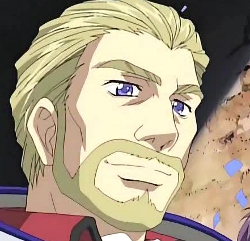 Cecilie's older brother, the poisonous advisor who took advantage of his sister's position as Maou and did most of the running of the kingdom on her behalf, leading to a great deal of unpleasantness and tragedy twenty years ago. He seems eager to repeat the process by ingratiating himself with the new Maou, but his nephews and Gunter are adamant about blocking his way, and even on the rare occasions he manages to get Yuuri alone, Yuuri proves Too Dumb to Fool, which has the effect of turning Stoffel's political machinations into comically, pathetically sycophantic attempts to win Yuuri's approval any way he can. (It helps that his and Cecilie's childhood friend Raven is clearly the brains of the operation, too.) 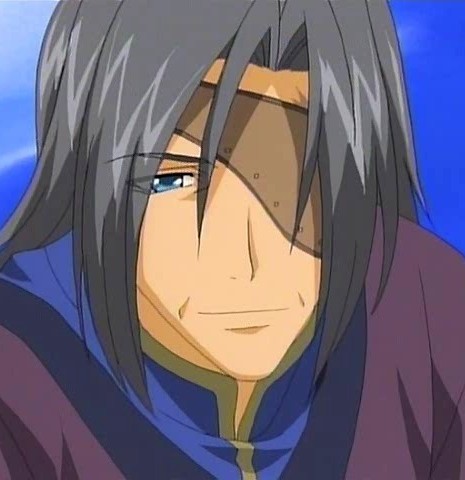 A minor noble and a cousin of Gwendal's. He was involved in some kind of tragedy involving Conrad and Adalbert twenty years ago, that no one seems to want to talk about with Yuuri. When it was over, Hube was exiled (officially 'sent on a mission to recover lost artifacts'), and went willingly after having failed to protect the country that he had loved, however misguidedly. While in exile, he fell in love with a human woman, Nikola, who we first meet some time later, after they've been separated, only to discover that she's bearing his child.

They encounter Hube himself not long afterward, acting as the bodyguard to a corrupt businessman. He forces a confrontation with Conrad, which results in his being injured and brought back to Shin Makoku, where more drama ensues, ending in the obviously-reformed and regretful Hube being forgiven by all parties, after which he remains utterly loyal to Yuuri.

The Planet In Which Yuuri Always Shows Up In A Bathtub 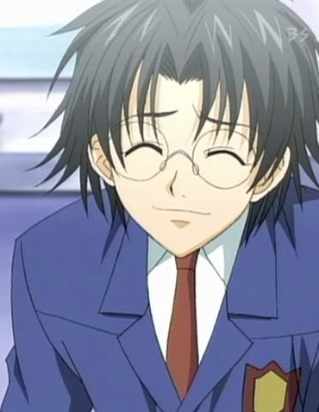 Murata makes an appearance in the first episode, as a boy being bullied. Yuuri, being a fighter for justice interrupts them - giving Murata the chance to run away. He doesn't forget this act of kindness, however, as he and Yuuri are good friends from that point onward.

Murata cannot travel between Earth and the Mazoku world on his own, so he must travel with Yuuri. 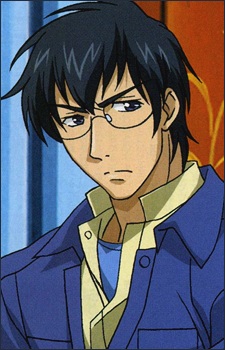