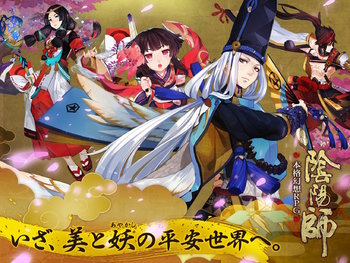 "Haraitamae, kiyometamae, kyū-kyū-nyo-ritsu-ryō!"note Left to right: Yaobikuni, Kagura, Abe no Seimei and Minamoto no Hiromasa. Not shown: Kohaku and Minamoto no Yorimitsu
Onmyōji, or alternatively Onmyōji Honkaku Gensō RPG, is a Sino-Japanese mobile Eastern RPG developed by NetEase Games, which can be briefly described as the Heian counterpart to Sengoku Basara. It features a world where humans and Youkai coexist and follows the protagonist Abe no Seimei on his quest of restoring peace and order to the land. The game features stunning scenery, beautiful character designs, elements of Japanese culture and mythology and a highly inaccurate portrayal of history. Well, it's a fantasy game, after all. In 2018, a spin-off Multiplayer Online Battle Arena game entitled Kessen! Heian-kyō has been released, which features a number of characters from the original game. A musical adaptation, Heian Emaki, was also performed in Japan in March of the same year; another musical entitled Ōezan-hen was announced in May 2019.
Advertisement: