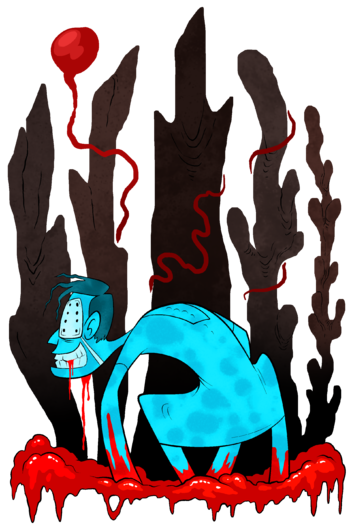 But the crumbs… remembered.

This page covers the Parliament and their minions; both their willing accomplices and unwitting pawns, and even characters from their storybooks.

The Parliament of the Old Flesh 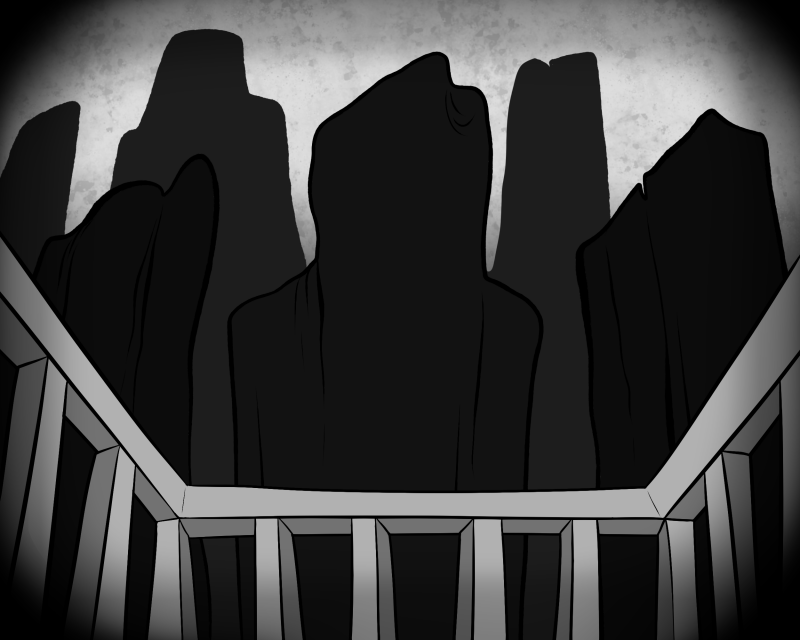 Picture Book: THINGS KEPT FLAGRANTLY EXISTING and REMORSELESSLY NOT BEING THE CAKE, ALL RIGHT IN FRONT OF THE POOR CAKE'S PRECIOUS, VIRGINAL EYES. EVERYTHING BECAME RUINED AND DISGUSTING FOREVER. Soon, all that remained of the cake were a few small crumbs. But the crumbs… remembered.

A mysterious interdimensional organization that seems to have close ties to Fern's son. Very, very long ago, they used to be the crumbled remains of an unfathomably ancient lifeform. 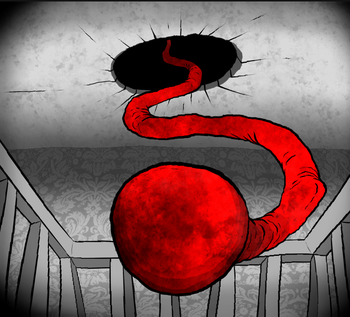 An enormous, silent red worm who ostensibly serves as the Parliament's eyes on the multiverse. He appears to be the Rod of Asclepius on The Hospital's door

A blob of pale flesh encrusted in bulbous sphincters, who observes the progress of the Parliament's experiments on reality. 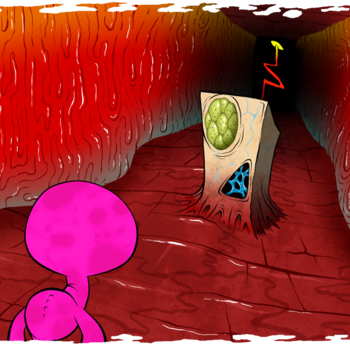 "AN EXCITING SERVICE TO THE MAJESTY OF THE OLD FLESH LIES BEFORE YOU!"

Emissary: zzzzZZZZWWWZZZZWWWYYNGGGGGGSSSGRRR*G*G*G* GRRRRRRReeeteetEETINGS INTO BEING, FLESHLET! FEAR NOT MY BLINDING GLORY! AWESOME THOUGH MY COUNTENANCE MAY BE, I AM BUT A HUMBLE EMISSARY OF THE PARLIAMENT OF THE OLD F-FLESH!!!!! ALL POWER TO THE OLD FLESH!!!!!!! A HOWLING VOID UPON DETRACTORS!!!

When the slob made from Jay's left eye steps out of the room he was "born" in, he discovers this stranger awaiting him in the hallway. It introduces itself as an emissary of the Parliament, and seems to have appeared here for the sake of recruiting the young slob into the Parliament's service. 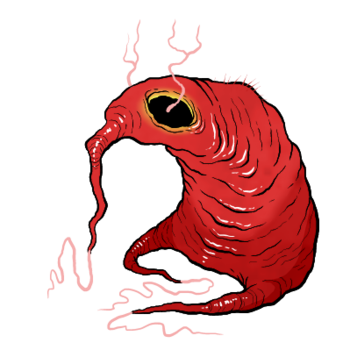 A little red thing that dwells in the flesh, providing the Eyeslob's first conversation page. Does not think highly of the Parliament or existence. 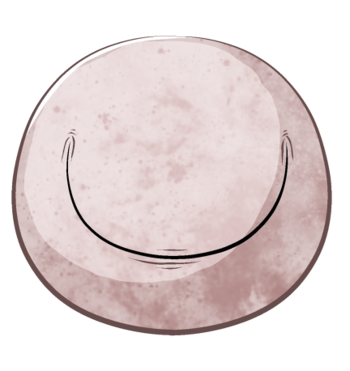 ◊ the underblast through seventh-level exoduct coils are advised to be scrutinizing of potentially vexatious deviation from subgenesis protocol. A behavioral eccentricity indicative of buzzer corruption, Suspect clusters are to be reported immediately to your sector's ottoman for quarantine and extinguishment.

Commentator sensors which are stationed within Parliamentary territory. 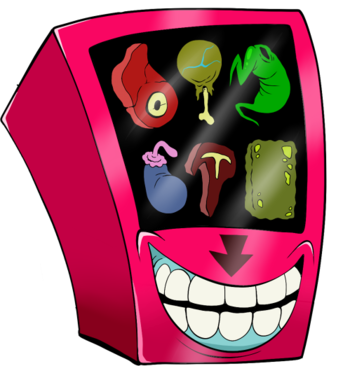 How much for the alien child?

Vending Machine: I AM BUT MEREST FOOD SENSS-SS-SATION DISPENSENATOR!! WHAT EVER CAN I DIS-P-PENCE FOR YOUR HHHHHHUNGER????
Fern: THE KIDDO, ya clownhonk! Spittin' image of 'er mama! Cough'er up and we ain'ts gonna gots no trouble, SEE!

A vending machine which was was keeping Nicole's daughter as its prisoner inside a Burgrr break room. Fern was able to identify it as an agent of the Parliament. 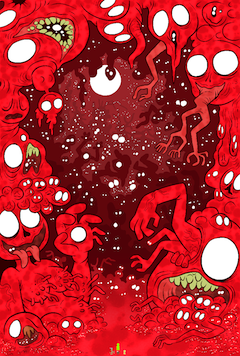 You step through the eerie, luminous opening, waves of nausea on a rampage through your guts...

When Fern and her corpse fauna friends blew up the polyp to nothing but smoke and cinder, giving way to an ominous red passage, the woman was not prepared for what was on the other side. What was waiting for the four girls was this titanic, seemingly infinite hall of flesh, apparently trying to recreate Fern and failing to do so, resulting in the abomination she sees before her eyes. It's eventually revealed to be a highly infectious super-disease engineered by the Parliament that can afflict literally anything, whether it be organic, inorganic, physical, non-physical, or in-between. 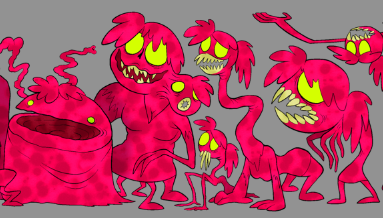 Dr. Balmer: Your ugly little friends spread fast, but I fear they haven't quite got the hang of keeping their disgusting "worlds" under proper control...

When Fern returns to the Morgue from the Inert Vessel, she is greeted by Balmer, who has good news and bad news. In the time it's taken her to step through the portal, it seems that the carrion-eating culture has developed into a full-blown empire. Its people, and the exvironator flesh they now feed on, have spread across every carcass of Fern Green throughout the Morgue. That's the good news. However, they haven't yet achieved proper mastery over the reanimated bodies, which have all mutated into these horrific, shambling, sharp-toothed beasts which seem to be the ultimate stage of the Red Blight's infection. 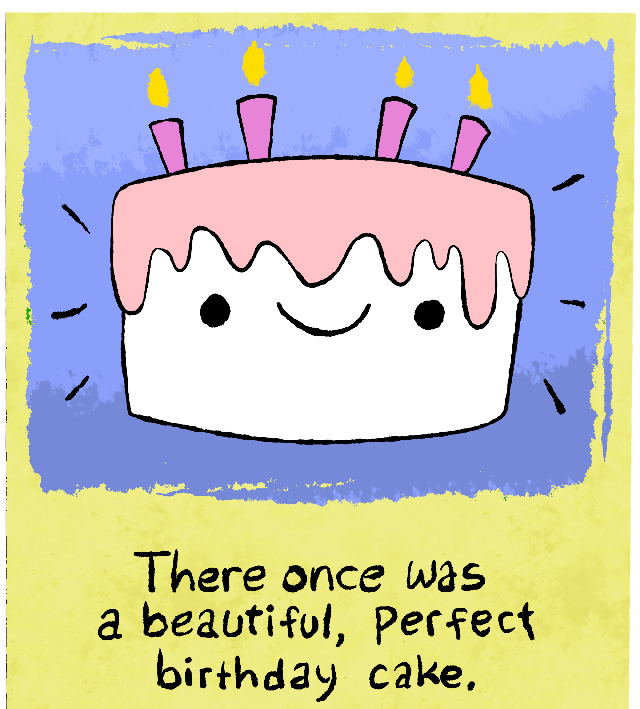 …And there was NEVER EVER anything else. Everything was just fine.

Picture Book: The Cake enjoyed being the ONLY THING there EVER SHOULD HAVE BEEN. Until, without warning, it began to feel UNWELL. As the innocent, sweet cake grew increasingly ILL, things began being that were NOT CAKE.

A character seen only in a picture book, but one that hints to major backstory. A primordial being that existed in itself before the multiverse came to be and it slowly deteriorated over time, its remains changing into what is now reality as we know it... and the Parliament. 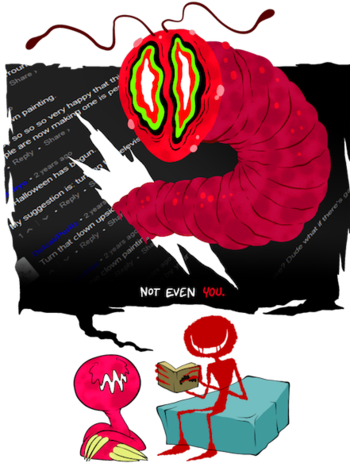 They will try, but nobody will stop the hungry hungry worm...

Picture Book: In a horrible void on a despicable filth wad, there was an idiot green egg. One layer, a hungry little grey worm hatched from the meddling egg.

The main character from a storybook which the Eyeslob

bought at a Parliament store. 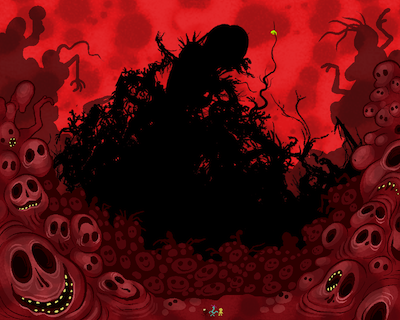 Look upon me and despair.

Maggie: Our dear friend is in danger!

When Fern and her companions blew up the polyp, they ventured forth to see what it had blocked. Fern's three inhuman companions looked upon what lay on the other side, and declared it to be an exquisitely sumptuous feast. Fern rather disagreed. But when the poor woman fled the "banquet" and her feasting friends, this thing intercepted her. 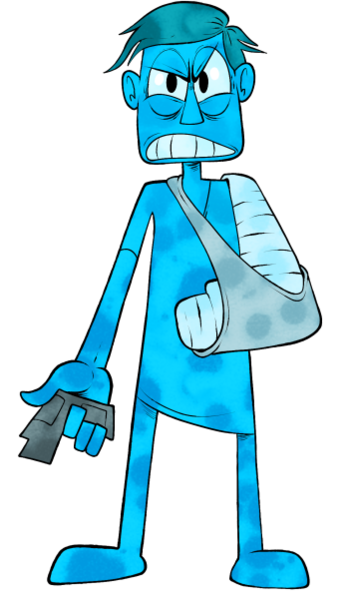 Guess what, Jay? Everyone hates you right back! 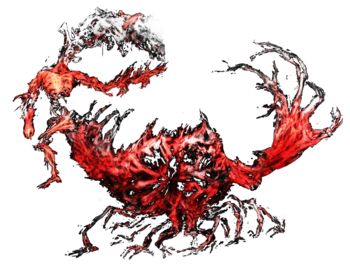 Isn't it all-too-fitting that such a crabby guy should transform into this?

Jay: Told you you'd just get me caught. The least you could help me do is bury this thing.
Fern: But I… she wasn't… "Bury?"
Jay: Yeah! You didn't know?! For some reason, if you bury something in the walls or floor, "off the map," I guess, it usually never comes back! …Nothing else even remembers it!

An extremely condescending and unpleasant fellow human patient whom Fern found in the Plank Maze within Dr. Tori's surgical ward. For a brief span of time, Fern followed him around. Just like Fern, Jay's an unnatural color and has been fleeing from the clutches of the Hospital Staff. It's currently unclear if he's the titular patient from "Doctor Phage's Hospital." His Hospital room is an unmarked and starkly dilapidated exam room located within the Plank Maze.

Special Note #1: The eye-based slob of Jay has demonstrated enough of its own unique individuality — separate and distinct from Jay and his fellow slobs — to warrant his own personal character entry. Tropes pertaining to him can be found here.

Special Note #2: For tropes relating to what Jay becomes after his Q-36 Procedure, please click here.

Chip warns Fern that there are two more killers prowling the Hospital, similar to Jay.