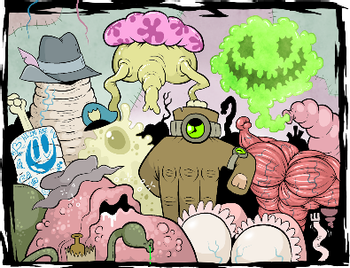 This page covers everyone (who isn't Fern Green or her son) that has been admitted to The Hospital to receive medical treatment. For better or for worse.

It also covers healthy individuals who are visiting hospitalized friends and family members. 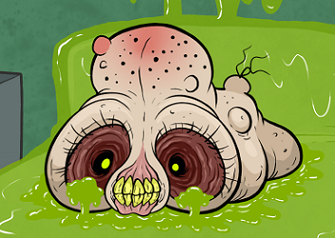 Got a truckload of Kleenex?

This adorable nose-monster was admitted to the hospital thanks to an infestation of kidney stones. He's loud and excitable, though not without a lot of heart. His Hospital Room is Exam Room VII. 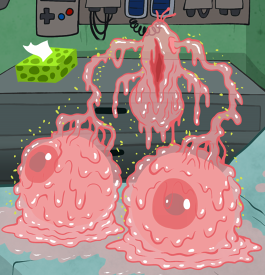 EYE am what EYE am.

A pair of giant, slimy eyeballs beset by an aggressive infection of parasitic clowns who just loves infuriating puns. Her Hospital room is Exam Room IIX. 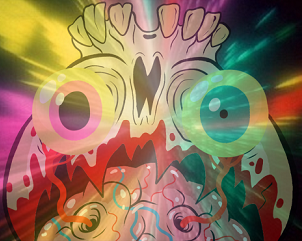 A mess of bleeding brains tumbling out of a broken skull, with a pair of normal-sized eyes still attached who bears an uncanny resemblance to a snail. He dreams of going superfast but he's really, really, reaaaaaaally superslow. His Hospital room was originally Exam Room III, but later he moves in with the Crooked Spine in Exam Room VI. 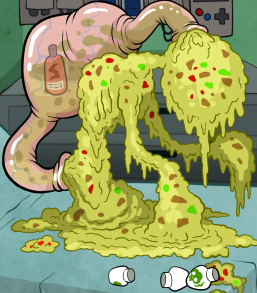 A stomach and a bunch of vomit that are somehow collectively one consciousness. He's hopelessly addicted to gas pills, which leads to more vomiting. His Hospital room is Exam Room II. 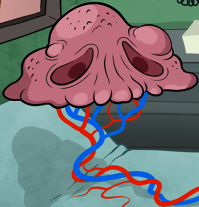 Depressed Spleen: Oh, it's you again. I take it you're here so you can leave again in disgust. That seems to be the only reason anybody bothers to visit. I think they make a game of it. I don't know if they're keeping score, but I've been doing it for them, at least.

A disembodied, mopey spleen who isn't happy unless he's miserable and will talk for hours about his real or imagined problems. His greatest wish is to get a real disease so he can complain even more. His Hospital room is Exam Room IV. 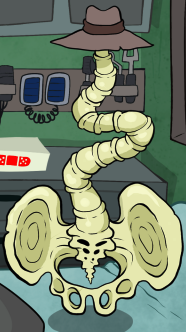 Crooked Spine: OH, the pain! THE PAIN OF IT ALL! ...The pain of sitting on all THESE INCREDIBLE LIMITED-TIME OFFERS! LORD ALMIGHTY, WILL NOBODY RELIEVE ME FROM THE BACK-BREAKING DUTY OF HOLDING ONTO ALL THESE ONCE-IN-A-LIFETIME BARGAINS!? IS THERE NO RESPITE, NO BACKING OUT FROM THE TORMENT OF CARRYING SUCH A BROAD SELECTION OF BRAND-NAME QUALITY PRODUCTS AT BLOWOUT PRICES!? BUY NOW, AND YOU'LL RECEIVE NOT ONE, NOT TEN, BUT TWO COMPLIMENTARY GIFTS AT ALMOST NO EXTRA CHARGE TO YOU, THE VALUED CUSTOMER. THESE TORTUROUSLY AGONIZING DEALS HAVE TO BE SEEN TO BE BELIEVED!

A twisted vertebral column salesman that's managed to smuggle his wares into the hospital. He can give you some pretty useful(?) stuff, but it comes at a price. His Hospital room is Exam Room VI. 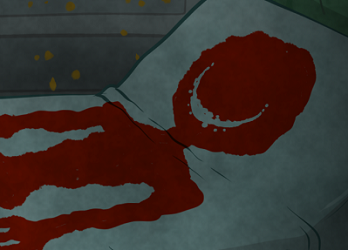 Not as flat, dry, or lifeless as appearances might suggest.

The Bloodstain: (to Dr. Phleboto, while Fern hides under bloodstain's bed) Land sakes, son! Ya lit'rally JUST missed her! Lil lady moves like an oiled-up slorvem on rupturin's eve! Ya better hurry, purdy thing could be chewin' on the tubes already!

An animate bloodstain; the first patient whom Fern encounters, as well as her first ally in The Hospital, quartered in Exam Room I. 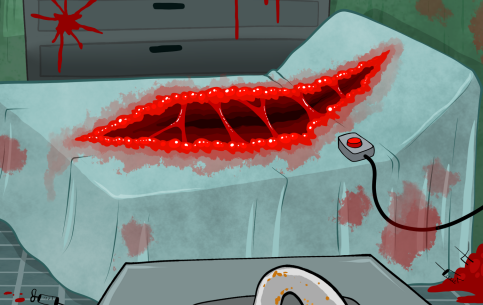 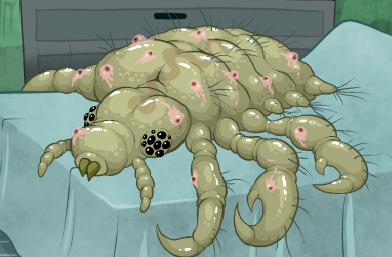 Cracking eye puns would be a lousy move for you to make.

A louse as big as a large dog, which came to be housed in Exam Room III after Eyeda Sorrit was moved out. 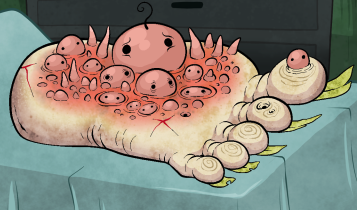 You enter examination room III... Only to be met with the one sight you absolutely cannot handle. The one thing that makes your entire body itch just to think about. You get only a faint glimpse before recoiling, but it's enough. Your mouth goes dry as you try not to heave.
Verruca Patch: Oh gosh...is it that bad?
You sneak another glimpse at the awful thing, wondering if it might not be as bad as you thought. The warts pop in and out as it speaks, like bubbles on the surface of a rancid pond. Yeah, it's that bad.

A single-minded collection of sapient, self-aware verrucas on the underside of a human foot. It's given Exam Room III, once the Oozing Skull moves in with the Crooked Spine. 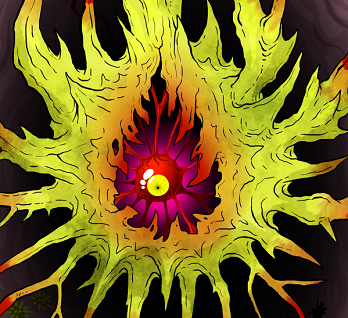 All her dreams of seeing them grow even taller than herself... CRUSHED.

The massive broodmother of the kidney stones afflicting Nobody Nose. Once Nobody's infestation is "cured", she goes berserk, killing Nobody, and threatening to do the same to Fern and her son.

The Sickly Spore-Son and His Mom 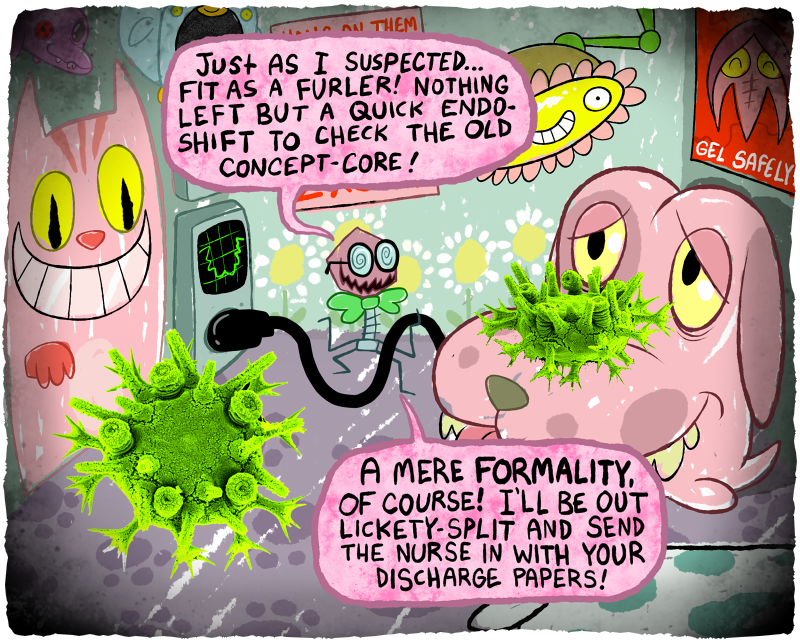 These two were smart to entrust their health to this doctor.

Dr. Phage: Sorry for the wait, Madame! How's the little one, this spiraling?

A young bedridden patient of Phage's and his mother. They used to occupy the Cat Room in the Veterinary Ward.

Jay? Is this you?

Fern: If it's for real, then we aren't the first human beings to wake up in the Hospital like that...
Staph: That seems comforting to know.
Fern: Yeah, but... it doesn't end well... it almost feels like a threat. Something wants me to know that this person never went home...

were both installments in the Noisy Tenant creepypastas penned by Bogleech before his creation of Awful Hospital. It is the story of a fastidiously germophobic man who winds up in The Hospital and is horrorstruck to discover that Drs. Phage, Mizer, plus a third, as-yet-unnamed doctor are his physicians here. They are about to subject him to a horrible operation, but he succeeds in escaping by claiming to need the men's room. The first story ends with the man revealing this all took place a year ago, by his estimation. He's still ill, and has been completely unable to locate any way out of the Hospital.

His story was the first to be officially welded into ''Awful Hospital'' canon, after Professor Lexicovermus gave Fern a copy of Doctor Phage's Hospital to read (though not its sequel). It's possible that he's actually Jay.

His entry can be found here. 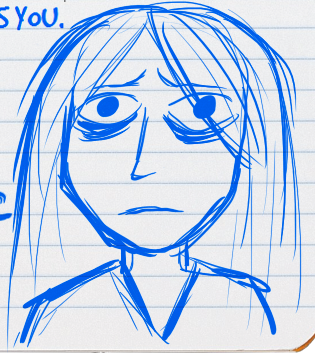 Jay's Journal: We were divorced more than seven years, she wouldn't still be wearing her band. She never called me "Booberry" before. I don't even know why I'm "blue" to everything here. She died two years before I even got here. I was over it then, and I'm over it now. A+ idea, there, Hospital, but nobody's as stupid as you think they are, or more accurately, nobody's as stupid as you.

Jay's ex-wife. Fern first read about Karen in a journal he had left in his room. A possibly fake version of Karen showed itself to Jay in the Hospital at some point in the past, but Jay rejected her.

How did she get in there?
A baby girl that is lost somewhere in the Hospital
Mitchell's Son
A boy that was taken away by personnel for what we can guess was supposed to be a checkup but he never came back.
The Phonograph's Child
The Phonograph's missing daughter
Allie 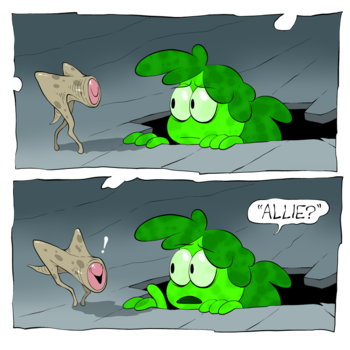 Not as harmless as she looks
Heather's daughter. Her mother came to the Hospital in search of her
Jagged Stain and Gooey Stain's Daughters
Jagged Stain's and Staicy's kids. We don't know how many there are
Cheryl's Dog
Cheryl's pet dog without a clear name. 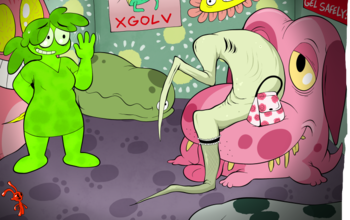 They have a lot more in common than you'd first suspect.

Willis: ...she says...uh... her baby got sick...
Nicole: NNNNNNNNnnn Nn NNnn N N N N N nnnnnNNNNNNNNN
Willis: ...And then she woked up here... Doesn't know where her baby is...
Nicole: nnnnnNNNNNNNN NNNN NNNNNNNN
Fern: ...And the doctors don't understand her.
Nicole: ...NNNN NNNn nNn NNNNN!!!!?!NNN NN!N!N!N!
Willis: She can't believe you know what she means.
Fern: All too well. 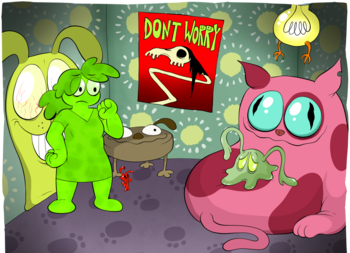 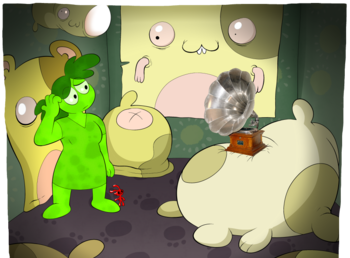 ]
Willis: Sorry Fern...I dunno that talk. She smells pretty though.

One of the parents in the Veterinary Ward. She's found inside the Hamster Room. 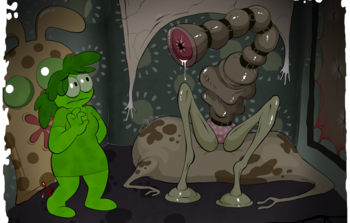 Heather's pretty well-behaved. Her daughter... not so much.

Heather: That soft little doctor...I don't think he knows what he's supposed to be doing! Admittedly, I don't know where my babygirl got off to either...but I'd be more worried for your sake!
Fern: ...My sake?
Heather: She can take fine care of herself, but, ah, maybe a bit too much. I wouldn't want to be such a fragile little thing in your shoes! SNRK! She really is a GOOD girl when you give her a chance!

One of the parents in the Veterinary Ward, the mother of a girl named Allie. She's found inside the room of an animal Fern cannot recognize. 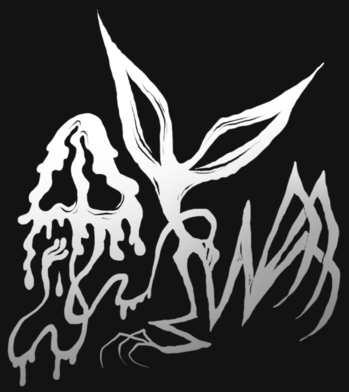 Fern: Hello the-
THE STAIN COUPLE ATTACKS! JAGGED STAIN USED STAIN CLAW vs. FERN!
Jagged Stain: WHERE. ARE. OUR. DAUGHTERS!?!
17 DAMAGE! FERN USED BLOCK! DAMAGE REDUCED TO 1!
Fern: W-whoa!!! Hold on!!
Gooey Stain: Oh...oh gosh...you MUST forgive her! She's not usually like this!!!
Jagged Stain: Yes I am!! Don't lie to the nice lady!!!!

The parents of an unknown number of missing daughters. They're found inside the Fish Room in the Veterinary Ward.

Yeah, yeah, weirdness galore and the end of reality... just gimme my dog so I can go home to my brats.

Cheryl: Human? All these layers and they send in a human? I thought I was paying premium here??
Fern: Um...sorry? My name's Frannie, I'm the, uh, temporary help here, and-
Cheryl: That's nice honey ya done with my dog or what?

One of the parents in the Veterinary Ward. She's found behind the Plank Maze door, which is implied to have originally been a Frog Room before it deteriorated.