Video Game / I Wanna Be the Guy 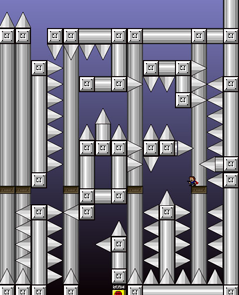 Probably the most straight-forward area in I Wanna Be The Guy.note See the tiny thing on the right of the picture, on top of the brown platform? That's your character. Good luck.
Q: APPLES DO NOT FALL UP
A: They're more like giant cherries.
— The game's official FAQ

You are The Kid. You want to be The Guy. To do that, you have to kill The Guy.

And standing between you and The Guy are hordes of annoying, hard-to-kill monsters, downright sadistic traps, nigh-impossible obstacle courses, and everything else that represents the worst parts of 8- and 16-bit platform gaming.

All you have are a red cape, a small gun, and a Double Jump. You also have infinite lives, and you will need every single one of them.

Get the game here

, and have fun dying!

Many, many fangames of this have been made due to an easy-to-use engine containing the basics of the original game. A list of some more prominent ones can be found here. In addition, an official sequel called I Wanna Be The Guy Gaiden was released on July 14th, 2012.

There is a Spiritual Successor by the name of Battle Kid: Fortress of Peril, endorsed by Kayin himself. Also, The Kid is an unlockable character in Super Meat Boynote Naturally, he is the hardest character to unlock. The Kid is also a bonus boss in Pocket Rumble and a playable character in Indie Game Battle.

The game was made open source on December 30th, 2011, mainly to allow the community to try fixing its innumerable bugs.

Contrast with You Have to Burn the Rope and compare Kaizo Mario World, Jumper and N. No intentional relation to Stinkoman 20X6, according to the FAQ