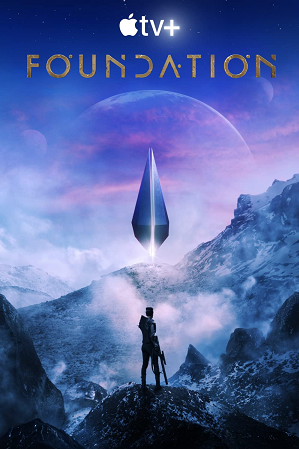 Change your fate.
"The Empire will fall. Order will vanish. Interstellar wars will be endless. Ten thousand worlds reduced to radioactive cinders. Nothing we do can prevent this... But we CAN shorten the dark ages that follow."
— Dr. Hari Seldon
Advertisement:

Foundation is a ten-episode Science Fiction Mini Series serving as a Live-Action Adaptation of Isaac Asimov's book Foundation. The show was produced and released through Apple TV+, executive produced by David S. Goyer and David Ellison. Members of the production team include Josh Friedman, serving as scriptwriter, and Robyn Asimov, as executive producer.

Millennia in the future, all of humanity lives under the peace and shadow of the Galactic Empire. This peace is disturbed when a university mathematician named Hari Seldon (Jared Harris) begins publishing future predictions based on mathematical formulas that indicate the Galactic Empire is in a slow death spiral. The emperors of the Triple Throne, Brother Dawn (Cassian Bilton), Brother Day (Lee Pace), and Brother Dusk (Terrence Mann), clones of the original Emperor Cleon I at different stages of his life, must decide whether to heed Seldon's warnings or eliminate him. Stuck in the middle of this power struggle is Seldon's newest assistant, Gaal Dornick (Lou Llobell), who may hold Seldon's fate - and the future of the Galaxy - in her hands.