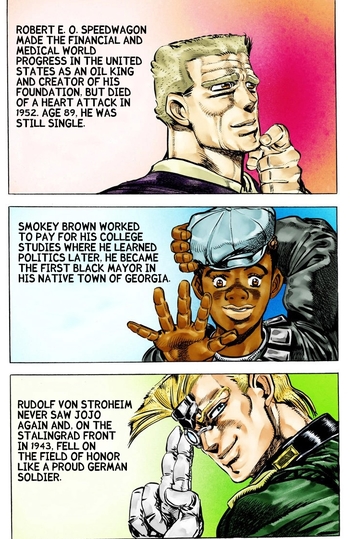 "Monty Python. Where are they now? Well, they're here in this cupboard."
[Opens cupboard; they are in fact inside]
[Closes cupboard]
"...Sad, isn't it?"
— Steve Martin, Parrot Sketch Not Included
Advertisement:

A kind of epilogue where we're shown what happens to the characters, places and/or the setting after the series. It usually gets about a minute or two during the last extended credits of a Grand Finale, or a less intrusive version of the closing credits may roll over it.

A staple of the Very Loosely Based on a True Story films, it differs from a Distant Finale in that we get little flashes (such as photographs, still frames, little captions, narration/voiceover, or a Montage of individual clips) that tell us what happened to the characters, instead of a full scene with dialogue or character interaction. If it shows how each character meets his maker, a Deadly Distant Finale. Can be used to create a Fast-Forward to Reunion. If it happens while the credits are rolling, it might be Creative Closing Credits. In video games, this may be done in form of a dynamic Modular Epilogue. For works Based on a True Story, this often overlaps with Real-Person Epilogue where the real inspiration for the fictional character is shown. How We Got Here is the exact opposite of this trope.

This is an Ending Trope, so expect spoilers.

Examples discovered the key to saving the world and now basks in international gratitude.

open/close all folders
Comic Books dedicated his life to justice. The police force offered him a job, but he declined, stating that he "had other plans."
Comic Strips decided to make doodles to spread laughter across the universe. He never messes up a single punchline!
Film — Animated started drawing millions of epic stories with visuals. He has never before been as happy as he is now.
Music followed her dreams and formed a variety band called "Music and the Notes." Their first album sold over a million copies.
Podcasts began recording himself talking about how to paint, cook, and do other things.
Radio — well, he's an unknown, having disappeared into the wild, blue yonder.
Theatre continued to live his over-the-top lifestyle. How this hasn't gotten him fired from his bartending job yet is beyond us. Maybe he owns the bar?
Visual Novels lives on the same shelf as Video Games above. They get along really well, and have even begun to share each other's interests.
Webcomics joined his behind-the-times brother in his quest for comedy, posting some of the funny doodles online.
Web Original opened up a video store. There, he has obtained plenty of customers.
And as for Real Life, nobody is exactly sure what he's up to, but it has been confirmed that he wanders for adventure frequently, and will continue to no matter how severely the circumstances change.

Alternative Title(s): Where Are They Now