The Gay '90s
aka: Gay Nineties 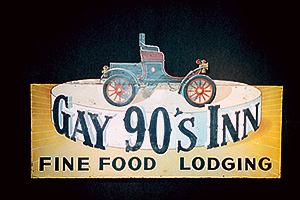 You see, back in the earlier half of the twentieth century, people became enamored with the 1890s. It was where what we now recognize as "decade nostalgia" was born, and The Gay Nineties became a popular setting for films of the 1930s, the 1940s and, to a lesser degree, the 1950s and 1960s, by which time it was seen as that innocent age before World Wars and atomic bombs.

If you lived in this time period, you were generally fortunate as long as you lived in wealthier countries of the world, as it was a time of relative peace (see below). On the flip side, if you were born in this decade, you would most likely live long enough to see and probably be involved in the First World War, The Spanish Flu, The Great Depression, the rise of totalitarianism, wartime genocides, and the Second World War. Further, if you weren't part of your country's majority ethnicity, and/or if you were female, your rights were not anywhere close to those of the men who were.

This was also the time of the last great gold rush in the Klondike region of the Yukon. Thousands of prospectors headed north to strike it rich, and while the American town of Skagway, Alaska may have been wild, the prospectors in Canada quickly learned that they were in a very different gold rush, with the North West Mounted Police under the command of Sam Steele keeping a firm hand on their behavior. As such, it was the most orderly of such affairs in history and the legend of the Mounties was born.

The automobile was just barely invented, so new that people couldn't agree on what to call it ("Horseless carriage" is the memetic old-timey name, but that only scratches the surface). Most people who lived in cities traveled around in horse-drawn hansom cabs, pedaled bicycles (built for two or otherwise, and often the kind with the enormous front wheel, called penny-farthings), and rode on trolleys, but most people still lived on the farm, and horse-drawn farm wagons were used as all-purpose transportation. In major cities, electric lights were replacing gas lamps and candles. Other technologies that would later be typical of the 20th century and beyond, such as planes, telephones, and films, were also being developed around this time. Ragtime was the hottest music.

According to nostalgic films set in this decade, back then everyone was a rich white person who wore Gorgeous Period Dresses, with every lady wearing Art Nouveau inspired dresses with Giant Poofy Sleeves and carrying a Parasol of Prettiness fashion tips Take note that the fashions in this decade no longer used bustles. The exaggeration shifted from the backside to the shoulders, leaving the skirts undraped in an A-line form, and giving the silhouette an hourglass look. Any fashion historian will tell that the notion of everyone wearing bustles in the 1890s is like everyone wore neon powersuits with gigantic shoulder pads in the 1990s., and they all liked to hang out in ritzy places located in major U.S. cities (for New York, this was Delmonico's restaurant at the Waldorf-Astoria hotel). In fact, the "everybody's rich" stereotype stems from a conflation of this period with "The Gilded Age" (1876-1917), as the Gay Nineties were also marked by economic depression and much labor agitation (see Panic of 1893

on The Other Wiki), not to mention the Spanish-American War. Even then, the term "Gilded Age" (as in, "coated in gold") was specifically meant to indicate that the good times were only a surface veneer, with serious problems lurking just beneath (as the Gay Nineties themselves later demonstrated). If you can find the graphic history book, The Good Old Days: They Were Terrible!, you can see a sobering look at the real grimy realities of the era. It was certainly grim if you weren't a well-off white man in that time; racism was blatant and commonplace and not only had the backing of the law, with the Supreme Court ruling in Plessy vs. Ferguson that racial segregation was legal as long as it was "separate but equal" (a condition which no civil government took seriously), but was defended with pseudoscientific theories that lent a veneer of "scientific" legitimacy to pre-existing assumptions of the superiority of the white man. Mark Twain's entire career involved him angrily mocking colonialism, imperialism and American Exceptionalism.

Abroad, things were jumping internationally. In France, there was the Dreyfus Affair where Alfred Dreyfus, a Jewish French Army officer, was made The Scapegoat of a trumped-up treason charge. The controversy tore apart France as conservatives and the Army stubbornly refused to have Dreyfus' case retried no matter how much evidence about his innocence piled up, citing the need to uphold the "honor of the army" (which apparently involved covering up and defending the lies enabling a blatant Miscarriage of Justice). Meanwhile, Britain found itself in its own version of The Vietnam War with The Second Boer War in Southern Africa. It proved a frustrating fight against a savvy, well armed, and determined foe that finally required the British rounding up the civilian population in concentration camps to break the will of the enemy. At the same time, King Leopold II of Belgium was making a mint with his Congo Free State, a massive swath of Equatorial Africa as his personal property which was exploited to the hilt with ruthless colonial brutality enforcing his will, causing a death toll estimated to be 10 million Africans. It would inspire the Joseph Conrad novel Heart of Darkness, in which there was a very good real-life reason why Kurtz's last words were, "The horror... the horror..."

Meanwhile, Germany's international presence changed dramatically as Kaiser Wilhelm got rid of the master politician, Otto von Bismarck, and set his country onto a recklessly aggressive stance that Bismarck strove to avoid, such as directly challenging Britain. And the Ottoman Empire, already beginning to split at the seams and having never quite recovered from losing Greece earlier in the century (in fact, political satire of the day referred to the empire as "the sick man of Europe"), showed its first signs of turning its Christian minorities into scapegoats, with widespread massacres that sent the first big wave of Armenian refugees to America and elsewhere (the next, even bigger wave coming during World War One).

In Australia, the 1890s are among the most important eras of the country's history, politically, economically, and culturally. Australia's first art movement, the Heidelberg School, bloomed during this time. Bush Poetry also hit its stride here, most famously Banjo Paterson's Waltzing Matilda. The decade's also seen as the beginning of a new chapter domestically: Melbourne's Golden Age since the 1860s came to a very sudden end in 1893, and the city saw no growth both economic and population-wise for over a decade. In its place rose Sydney, which was recovering from nearly a century of constant plague, kickstarting a rivalry between the two cities that only seems to have gotten stronger since. Sports-wise, the Victorian Football League broke off from the Victorian Football Association in 1896, growing into one of the most followed and watched leagues in the nation, and today is slowly encroaching into what is traditionally Rugby League territory. The most important thing that happened, however, was the Federation movement. The distance between Britain and the colonies, the economic hardships they were facing, and the threat of Russian/French/Chinese invasion meant that if the colonies were to remain divided, they would remain weak and eventually end up being conquered. Spearheaded by men such as Sir Henry Parkes and Sir Edmund Barton, the Constitution was drawn up during this time, and New Zealand and Fiji were asked to join. They declined, though jokes about them being Australian states are still being made today. Western Australia tried to keep out of it but to no avail.

It should also be noted that the term "Gay Nineties" for this era, like the "Edwardian Era" that followed it, is primarily British. In America there is also the aforementioned "Gilded Age" from the End of Radical Reconstruction until the entry into World War I, while in continental Europe you usually use the French la Belle Époque (roughly 1884 to 1914), the German "Wilhelmic Era" (Wilhelminische Ära, 1890 to 1914), or the French-Austrian Fin de siècle (also 1890 to 1914).

Films actually made in the 1890s were about thirty seconds long with little to no plot (people were still amazed that pictures could move). You can watch some of them here

.note The first three sequences are of the movie studio's employees leaving the factory, to show off the company's size; the last one is an example of the then-amazing special effects that could be created by, in this case, splicing in a segment of film backward.

Art in this decade had shifted from the traditional, realistic, and impressionist movements to the innovative, modernizing, and expressionist movements. Art Nouveau had its full blossoming glory after the style spread in Europe, and the works of Vincent van Gogh after his death, Paul Gauguin, Alphonse Mucha, and others went into full display.

Historically, the 1890s was one of the more iconic periods of American history, leaving an impression every bit as indelible as The '50s still does today. As a result, long after the actual decade had faded from memory (sometimes quite long after it faded), many of its tropes and stereotypes remained common fodder for depictions in the popular arts. This wasn't usually done without at least a bit of irony (usually only in satirical or Cloudcuckoolander works), but writers and artists returned to the Gay Nineties well so often that its conventions became even more stereotypical.

With the 2017 death of Emma Morano, who was the last known living person born before 1900, there is officially no one left to be nostalgic about this decade. This is a Forgotten Trope and the fact that the name "Gay Nineties" was never changed should give you an idea how long it's been dead. Of course, they still make films set in the 1890s, but the nostalgic version from the '30s and '40s is pretty much gone. In fact, some modern-day Hollywood writers seem to think any year not starting with "19" or "20" means "completely pre-Industrial Revolution." For example, see the entry on The Village farther down this page. However, today's general unfamiliarity with the period works set in the 1880s or 1900s may make their setting indistinguishable from the stereotypical Gay Nineties.

As was suggested earlier, The '50s and later The '80s eventually replaced the 1890s as the nostalgic period of choice, with the result that those decade's tropes largely replaced the ones mentioned above (resulting in Still the '50s or the '80s, perhaps)?

However, kooky Gay Nineties stuff still pops up occasionally, most often in works directed at preteen children, or in surreal comedy series such as The Simpsons or Family Guy. Also, the rise in popularity of Steampunk may represent a new, updated reflection of the nostalgia for the nostalgia.

Nor is this trope exclusively American. If anything, the British seem to make a fetish out of it even more. (This may be because the mid-1890s represented the high point of the British Empire before the Boer War took the gloss off and the Great War began its decline, and where Queen Victoria celebrated sixty years of her reign.) And in France, well, this era is known as la Belle Époque — "the Beautiful Era" — for a reason.

If a story set during the Gay Nineties takes place in the western part of the United States or Canada, the Twilight of the Old West trope often comes into play.

See Also: Regency England, Victorian Britain, The Gilded Age, The Edwardian Era, The Roaring '20s, The Great Depression, The '40s and The '50s, and also Two Decades Behind.