Characters / We Have All Become Pokémon: Player Characters

If you wish to add your character, copy/paste this template below, fill it out, and include it when editing this page to add your own character, or you can just do whatever.

The first character to be introduced in the RP, and certainly among those who've changed the most. Initially, PJ was a cheery little ball of sunshine, taking the whole "Trapped in Another World" scenario quite well and doing what he could to support his friends. Unfortunately, he ended up getting Put on a Bus for the majority of the Silversand arc, and upon his return, he had changed. He had contracted Viral Aggression, and was much more willing to get into fights, enjoying them much more than he reasonably should, though he was aware of what had happened to him. During the Hoard arc, however, things went from bad to worse as he was manipulated and brainwashed by Belladonna, who made him into her boyfriend and attempted to wreak havoc upon the city alongside him. He managed to break free from her control, and she was killed, though the experience scarred him, giving him chronic nightmares and making him paranoid that the others hated him or saw him as a liability. This has lessened over time, and PJ's slowly been getting back to being the person he was at the start of everything, but he's still nowhere near who he was back then.

Finley is just an alias. For the first 16 days of the journey, she was hiding her real identity. That being Autumn Farbridge, who was the daughter of the rulers of Foxfell. For these first 16 days, she only pretended to be a human so she may be able to meet and get along with the people who actually were in the situation. During this time however, she met Mila, and eventually ended up in a relationship with her.

The true avatar that Autumn's false memories belong to. Because Autumn intercepted her memories, she's left an amnesiac, but doesn't really seem to mind. 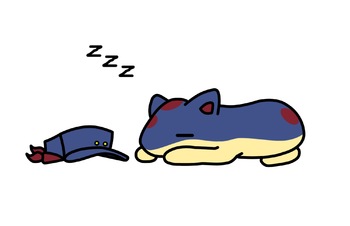 The biggest member of the group. Guy tends to be in the background most of the time, but when he does involve himself, an impact tends to be made.

An unemotional member of the group. Despite the various inconveniences that come with being a Beldum, they have no desire to return to their original human form. 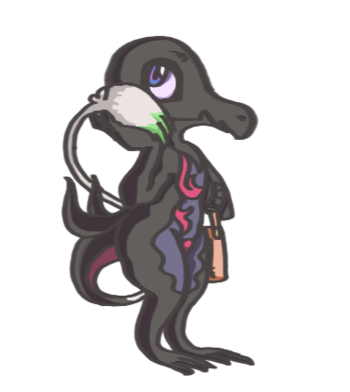 Spooks is a rather cheerful Gourgeist who briefly joins the party before disappearing for a long time. He eventually comes back, only to disappear again.

Goobert is one of the few characters to take their transformation into a Pokémon, namely Goodra, in complete stride, and is a relatively cheerful, if cautious, character.

A shiny Serperior that arrived in the Pokemon world several months before the others; as such, he's had time to grow accustomed to the Pokemon world and its culture. Using his knowledge of berry mechanics, he established himself as a berry farmer, butting heads with Dras-Il and trying to set up a trade deal with Orichalcum. He later goes into the soft drinks industry, selling 'Serris' Authentic R-Soda' in Silversand, becoming the CEO of SuperiorFarms, Incorporated.

to the island under the patronage of Chairgon Merqury, enabling for much larger berry yields, but patented the process behind Merqury's back, denying the old dragon any profits gained from it.

Following Merqury and Bella's defeat at the end of the Hoard arc, Serris attempts to invoke a deal he had struck with Ripley behind the party's back to trap them in Hoard and use them as guinea pigs for his science partners, intending to take advantage of human knowledge of game mechanics and tropes, revealing himself to have been an antagonist the entire time. The party is ultimately let go anyway thanks to Ripley's intervention.

A butler in his human life, Noriaki is just as polite as one would expect someone of his profession to be.

As a human, Jani had never played the Pokémon games and only saw a few episodes of the anime. One of the eldest of the humanmons, perhaps only surpassed by Serris and maybe Andy, she attended college at an unnamed public California university and acquired a bachelor's in Computer Science. At the time she was transported into the WHABP world, she was working as a software engineer in Pennsylvania. The transfer happened as she slept.

Arriving in the second wave, Jani the Diglett woke up underground and encountered the group as they were lounging by a stream. Unlike most of the cast, she had transdimensionally swapped bodies with a Diglett named Milly, though this didn't become known until nearly two weeks later. Given her ignorance of the series, she struggled to make sense of anything and one of her earliest adventures resulted in her getting mauled. Having her memories scrambled by a cover story she poorly fabricated, she spent about a week thinking she was a world native, and in that time contracted the Viral Aggression. Leaving the party again until Hoard, she ended up being a bit rougher around the edges and world-weary.

While in her deluded state, but prior to the events of Hoard, she managed to inadvertantly leak an incomplete chemical formula for vulcanized rubber, something she picked up in college Chemistry classes, to a Silversand scientist named Hevea. They filled in the gaps overnight and after teaming up with a local merchant, the three formed a company built around rubber and Hevea's inventions. This factors into some of Jani's absences from the party, but as it's still a fledgeling company, it has had little impact on the world.

Since the events in Hoard, an Escape Orb hitting her led the party to discover the details of how she entered the world. Milly's sisters, Tilly and Lilly, depend on Jani eventually becoming willing to evolve with them, for the sake of their survival. The two became permanent party members, but as a result of Tilly and her mother's overbearing natures, Jani was driven to seek a way out — and she did, in the form of a Transfer Orb. Said orb transformed

her into a different species.

She currently masquerades as a Purrloin with the alias "Sarah Zant", a fangirlish band nut who has a thing for the Carbon Footprint band first encountered in Gleamscape. She has crafted a backstory using mostly elements of her youth...her love of metal, her time in California, among other things. At the moment, she is posing as a world native from the forest village of Lunalis. Adhering to the notion of "the most effective lies contain kernels of truth", she has done well to keep the facade going, but cracks are starting to form...

As a Diglett+ (and in general)

While Swapped With PJ

A character who has apparently existed in the immediate group for a while, Andy was introduced far later, once people realized he was present when he pitched in during a conversation. Went unnoticed so long due to being small, even for a Joltik, which is the smallest known Pokémon. Eventually used a Transfer Orb and became a Honedge.

Like others in the main party, he was a teenager at the time of his sudden crossing into the world of Pokémon. Is probably one of the most level-headed party members, but with some clear exceptions.

A weirdo Clauncher who one day woke up in the ocean and made their way to the shore.

A normally reserved Decidueye wanderer that joined the group in Agartha. He awoke a month ago in the frozen northern island of Arcquall.

A Girafarig enby who joined the team as a Litleo while heading to Gleamscape. Currently cursed to look like a Girafarig who took them in a few days after eating their corpse.

Kafkaesque's original PC. An Irish Roserade with an apathetic demeanour and a rather complex past.

Crossed as: Bronzong
A humanmon who suddenly appeared in the city-state of Narcia when the group was preparing to fight L'Arachel.
Steph (Kadabra)
Played by: sabrina_diamond
Debut: Page 1606

A Drifloon who vaguely remembers being at a circus or carnival before entering the Pokemon world. He wears a clown/party hat.

A Sandshrew who awakens and joins the group at the Narcia festival.

The mysterious former Baron of a obscure place named Asgardia.

A Fennekin that seemingly awoke sometime during the search in the Whispering Pines village.

A Raboot that appeared on the outskirts of Foxfell while the group is recovering from the Danjor Island Arc.

An Gigantamax-capable Orbeetle who has been around for several years and has poor mental health.