The Space Police of the Ultra universe, and the organization most Ultras belong to. 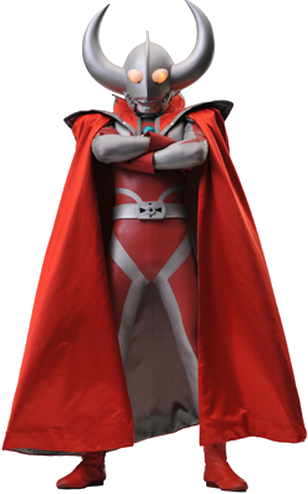 The Father of Ultra (or Ultra Father) is the supreme commander of the Space Garrison, the intergalactic peacekeeping force that all the Ultra Heroes belong too. A veteran of many wars, the Father of Ultra is one of the most powerful residents of the Land of Light. He has become a major part of the franchise mythos, such as being the literal father of Ultraman Taro. 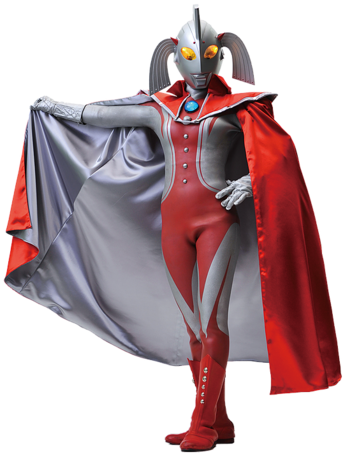 The wife of the Father of Ultra and the literal mother of Ultraman Taro. The Mother of Ultra (or Ultra Mother) is the chief of the Land of Light's Silver Cross Corps — the Space Garrison's medical division. She is a powerful healer, but also regularly drops advice and combat assistance for her son and husband when necessary.

The original red-and-silver hero of the Ultra Series and a pop culture icon in Japan. Ultraman is a being from the Land of Light in Nebula M78 who merged with a human named Hayata when he accidentally killed him. He was originally a low-ranking member of the Space Garrison, the universal police force that the Ultras make up. As the first of his kind to make a career out of protecting Earth from giant monsters and evil aliens, Ultraman has become a major figure in many stories since.
Zoffy

A high-ranking officer of the Space Garrison, Zoffy first appeared in the final episode to take Ultraman back to his home, the Land of Light. He has become a significant character in later entries, first reappearing in Ultraman Ace, as the captain of the Ultra Brothers (Ultraman, Ultraseven, Ultraman Jack, Ultraman Ace, and Ultraman Taro) and the one who assigns Ultramen to Earth.
Ultraseven 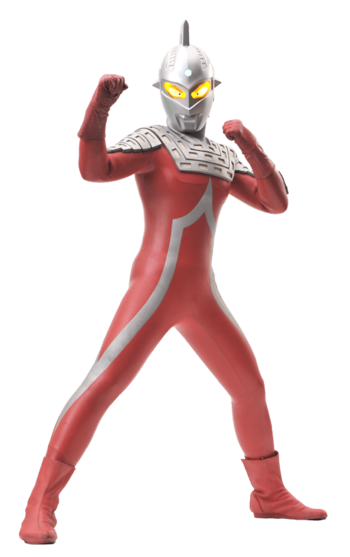 Suit Actor: Kohji Uenishinote Eiichi Kikuchi in Episodes 14 and 15, Tatsumi Nikamoto in Ultraman Leo, Voiced by: Kohji Moritsugu
The second hero of the Land of Light (or the first and only in the Heisei continuity), Ultraseven (or Ultra Seven, either is acceptable) was originally sent to map the Milky Way for M78. He found himself attracted to Earth and went there, rescuing a brave man named Jiro Satsuma and taking on the human's form with the alias Dan Moroboshi. He joined Ultra Garrison after assisting them in defeating an invasion force from Alien Cool and would assist them in many adventures. Since his debut, Ultraseven has become an important character in the Ultra Series, possibly even more than the original Ultraman! He was the first Ultra to appear outside his own series when he assisted Jack against Bemstar in Return of Ultraman and later returned as a major character in Ultraman Leo. His biggest contribution to the franchise's history though is probably his son, Ultraman Zero, who would go on to become one of the most powerful heroes in Ultraman history and star in a few movies and several specials. 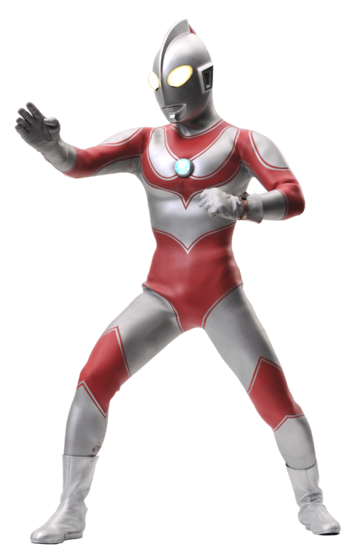 The hero of the third series, Ultraman Jack strongly resembles the original Ultraman (he was intended to be the original at first). However, Jack is very different character. He first appeared on Earth a few years after the events of Ultraseven addressing the spirit of Hideki Goh when the man was killed rescuing people during the destruction caused by the battle between Takkong and Zazhan. Admiring his bravery, Jack restored Goh's life by merging with him and the two would battle against a multitude of giant monsters and evil aliens. Ultraman Jack has also become a major character in the franchise, making semi-regular appearances in other series.
Ultraman Ace 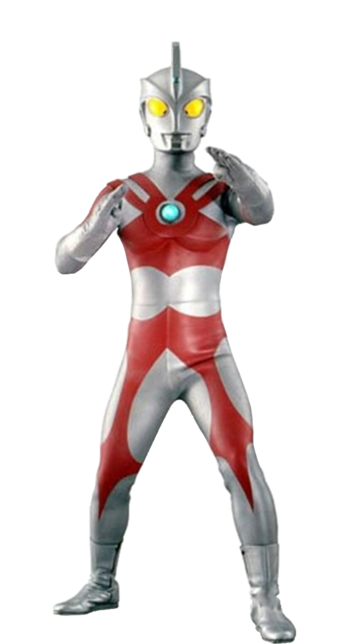 The star of his eponymous series, Ultraman Ace came to Earth to combat the threat of Yapool and his Choju. Unlike the first three Ultra Heroes, he took the bodies of two individuals — a man named Seiji Hokuto and a woman named Yuko Minami — to be his hosts after the two were killed in Velokron's first assault. Ultraman Ace would soon go on to recur in many other series, such as Ultraman Taro and Ultraman Mebius.
Ultraman Taro

to see the young Ultraman Taro

The son of the Father and Mother of Ultra, Ultraman Taro is the sixth and youngest of the iconic Ultra Brothers (Zoffy, Ultraman, Ultraseven, Ultraman Jack, and Ultraman Ace) who has trained as a warrior since he was just a boy. He merged with a young man named Kotaro, who was revived by the Ultra Brothers when he was killed trying to battle Astromons. Ultraman Taro has gone on to become one of the most important Ultra heroes in the franchise, as he trains newer heroes in the Land of Light, has appeared as a major character in other series, and even had his own movie. Taro would later become the father of Ultraman Taiga in the Reiwa Era.
Ultraman Leo and Astra
See The Planet L77 page for details on them
Ultraman 80 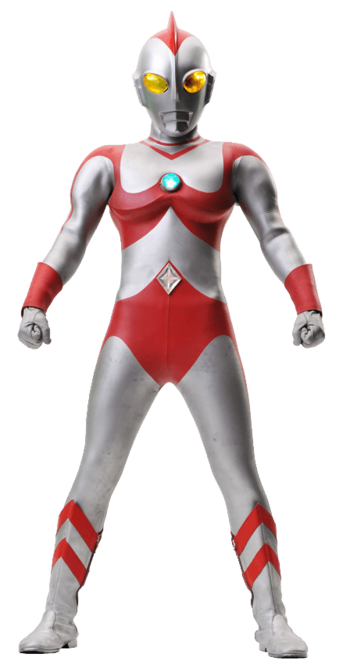 The last of the original generation of Ultra heroes to come to Earth and the first one to be seen since Ultraman Leo left five years ago, Ultraman 80 studies Minus Energy — a dark energy formed from negative emotions and evil deeds — and specializes in fighting kaiju formed from this energy. As a teacher on the Land of Light, he takes the form of a schoolteacher named Takeshi Yamato, hoping to pass the ideals of the Ultramen to Earth children. He is one of the less popular Ultra heroes, so he doesn't appear as frequently as most others, but is often seen alongside the classic heroes.

The childhood friend of Ultraman 80, Yullian is the princess of the Land of Light. She comes to Earth in Episode 43 in the form of a lady named Ryoko Hoshi with the alien tyrant Emperor Galtan chasing her for the death of his son (who had arranged a kidnapping-marriage for her). She joins UGM shortly afterwards, but finds no need to transform as 80 is able to deal with the monsters by himself until Episode 49.

Australia's take on Japan's favorite giant superhero, Ultraman Great has the distinction of being one of the few Ultra Series heroes of non-Japanese origin. He came to Earth to battle the malevolent alien entity Gudis, but because he cannot survive for long in Earth's polluted atmosphere, he merged with astronaut Jack Shindo, a man he rescued when they encountered Gudis on Mars. He is referred to solely as Ultraman in the series, with "Great" being added for the Japanese dub.
Ultraman Powered

One of the few Ultra Series heroes created outside of Japan, Ultraman Powered is an American reimagining of the original Ultraman. He came to Earth as a meteorite to stop the Baltans' quest for galactic domination, merging with Kenichi Kai in order to survive Earth's atmosphere. He is referred to solely as Ultraman in the series, with "Powered" being added for the series' Japanese dub. 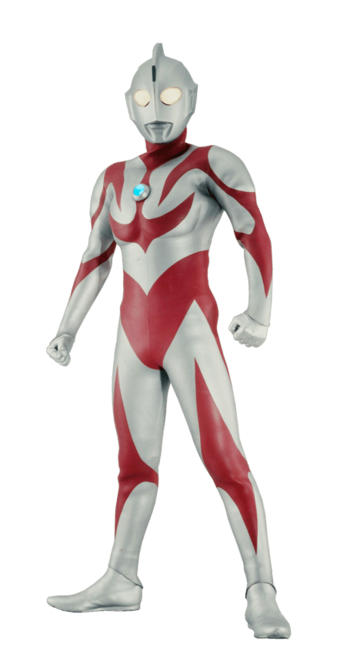 The titular Ultraman of Ultraman Neos, Neos bonded with astronaut Genki Kagura after the youth was left drifting in space from his space station's explosion. On Earth, Neos fought against monsters brought into existence by the adverse effects of Dark Matter.

An senior officer from the Space Security Agency, his department tries to send him to Earth but with Seven already occupied in his patrolling area, he choose Neos as his replacement. Seven would occasionally appear to assist Neos from behind the scenes, whether as a giant or human sized. 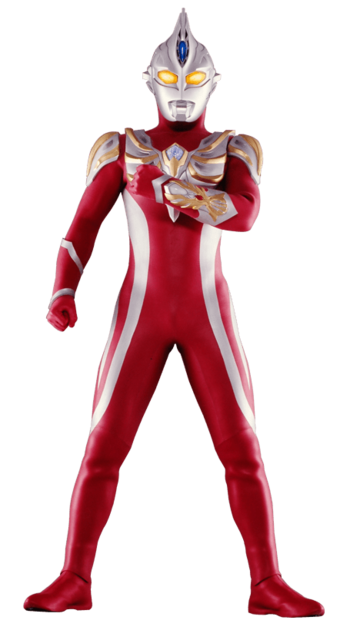 One of the fastest warriors from M78, Ultraman Max hails from an Alternate Universe of the Showa timeline in which he is the first Ultra hero to come to Earth. Having merged with Kaito Touma after saving the human from certain death against Grangon and Lagoras, he possesses abilities similar to those of Ultraman and Ultraseven. Ultraman Max has also made a few other appearances after his debut series.
Ultraman Xenon

Ultraman Max's direct superior on the Land of Light. Very little is known about Ultraman Xenon as he is one of the least frequently appearing Ultras. His only major appearance in the Ultra Series was his debut, where he came to deliver the Max Galaxy to Ultraman Max and showed off a bit of his combat prowess against Zetton.
Ultraman Mebius 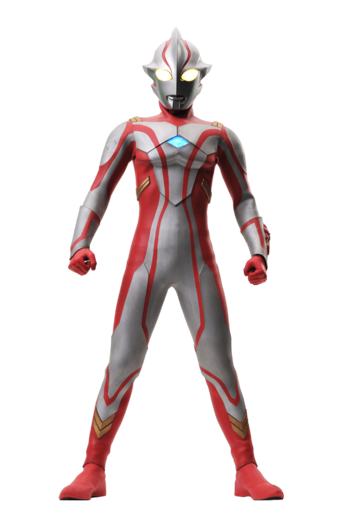 The Ultra hero of the franchise's 40th anniversary, Ultraman Mebius is the first Ultra hero of the original Showa universe to appear on Earth since Ultraman 80. He is inexperienced and relatively young compared to his predecessors, but learns about living up to the legacy of the Ultra heroes before him as the series goes on. He takes on the form of Mirai Hibino. Mebius would also have a few appearances in later entries of the franchise.
Ultraman Hikari 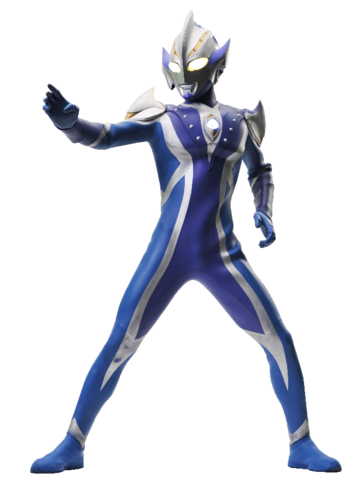 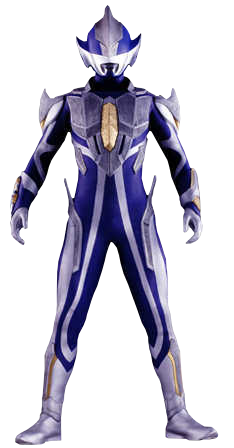 Originally an Ultraman scientist tasked with looking over the Aarb for study, Ultraman Hikari became Hunter Knight Tsurugi through his thirst for vengeance when the Aarb were devoured by Bogal. He came to Earth for Bogal and took on the form of Ryu's late hero and previous leader of the GUYS team, Kazuya Serizawa. After the defeat of Bogal, he was healed by the Ultra Mother and freed from his Armour of Vengeance, becoming Hikari again. Afterwards, he would make sporadic appearances in the series, as well as later shows. He also starred in a 3-episode miniseries about his backstory.
Ultraman Zero
See Ultra Series Ultimate Force Zero.

The titular hero of Ultraman Taiga and the son of Ultraman Taro, who once protected the Earth. Deep inside, he wishes his father Taro to understand and recognize him, but he cannot admit his true feelings. He has a strong sense of justice and is very enthusiastic. Along with Titas and Fuma, he founded the “Tri Squad”. Although still young and unskilled, he is dedicated in his mission to protect Earth.

Together with Hiroyuki, he grows to become a true Ultraman.

The titular hero of Ultraman Z, Ultraman Z is the new member of the Space Garrison trained under Ultraman Zero. While defending the Land of Light together with Zero, Z chased a space monster that made its way to Earth, where he bonded with STORAGE member Haruki Natsukawa and the two had since join forces to protect Earth from monster attacks.