King of the Dinosaurs 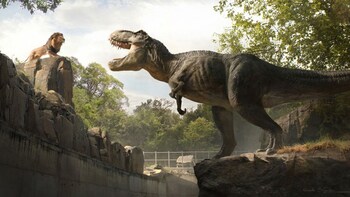 "Tyrannosaurus is the most superb carnivorous mechanism among the terrestrial Vertebrata, in which raptorial power and speed are combined."
— Henry Fairfield Osborn, the paleontologist who coined the new genus in 1905

Ever since its discovery in 1905, Tyrannosaurus rex became the single most well-known and popular dinosaur, the greatest stock of Stock Dinosaurs. While it may not have been the biggest carnivorous dinosaur ever, it was probably among the most powerful and dangerous. It is certainly the most famous, mainly because it looks badass with its massive head, powerful jaws and sharp teeth. For this reason, it is often seen as one of both the scariest and most majestic creatures that ever lived.

Notably, it is also the only dinosaur popularly known for the whole scientific name (genus Tyrannosaurus, species rex) instead of just the first term. The meaning of the name is "tyrant lizard king", which helps its majestic image as King of the Dinosaurs. The correct scientific abbreviation of the name is T. rex, but in media, the variants T. Rex, T-rex and T-Rex also often show up.

Fictional T. rexes will almost invariably be presented as immensely strong and powerful, with thundering steps and a Mighty Roar (nevermind the fact that making so much noise would make them a very ineffective predator). Some works portray it as a horrifying Prehistoric Monster which, like all carnivorous dinosaurs, seems to really like the taste of humans, despite the fact that we're fricking tiny compared to it (imagine passing on a turkey dinner to run a mile for Chicken McNuggets). In works starring herbivorous dinosaurs, T. rex will often be portrayed as the villainous predator. However, other works tend to portray it in a more sympathetic light, as a badass, powerful, but noble creature, sometimes even a Gentle Giant. These works often pit it against less sympathetic carnivorous dinosaurs, such as raptors or Spinosaurus.

The only thing that undermines the badass image of T. rex is its short arms, which are often subject to ridicule, thought of as useless, scrawny, and weak. It is a common joke that T. rex is so ferocious because it is frustrated about its puny arms. As with all theropods, its hands are almost always depicted as pronated, when this is now considered impossible in real life. They are supposed to face each other, like a person about to clap.

A staple of fiction featuring Time Travel, Lost World, Living Dinosaurs or just gratuitious dinosaurs. For more information about the animal, see the Useful Notes Tyrannosaurus rex page. For creatures that aren't T. rex but obviously inspired by it, see T-Rexpy. See also Raptor Attack and Savage Spinosaurs for other carnivorous dinosaurs with similarly badass, terrifying reputation. See King of Beasts for lions getting a similar treatment among extant animals. For the glam rock band known as Tyrannosaurus Rex or T.Rex, see here. For the book sharing a name with the trope, see King of the Dinosaurs: Tyrannosaurus rex. Not to be confused with the video game Dinosaur King or its anime adaptation, though both of these feature an example of this trope.

Note: Just because a work features a T. rex, it is not automatically an example of this trope. As with other Animal Stereotypes, the examples should describe how the T. rex is portrayed as either fearsome or as noble and majestic.