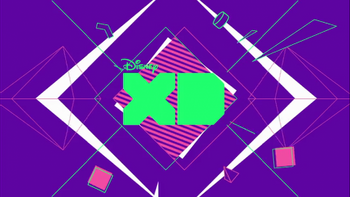 The Future is Now!
Advertisement:

Disney XD is an American cable channel that launched on February 13, 2009, replacing Toon Disney and in some regions, Jetix.

In the late 2000s, executives noticed that while Disney Channel had an overwhelming female audience, Toon Disney was skewed more towards the male demographic. Disney XD was meant to capitalize on this realization, with the channel initially being host to action/adventure-based programming. In essence, Disney XD was Disney Channel for boys.

Disney XD's original programming started out with live-action sitcoms, more dramatic series like Aaron Stone, and a few original animated productions such as Kick Buttowski: Suburban Daredevil. The channel has also aired anime titles such as Naruto Shippuden, Canadian co-productions like Jimmy Two-Shoes and Kid vs. Kat, and eventually reruns of Doctor Who would air for a short period of time.

Disney XD is considered to have begun growing its beard following Disney's purchase of Lucasfilm and Marvel Comics, at which point the channel began playing host to numerous animated series based on Marvel properties and the Star Wars franchise. Disney XD would also become the home for all non-preschool animated programming produced by Disney Television Animationnote the sole exception being Tangled: The Series thanks in no small part to Disney Channel playing favorites to their original sitcoms, beginning with the second season of Gravity Falls. Reruns of these shows occasionally aired through a branded programming block on Disney Channel. This renewed focus on animation ironically began the process of turning Disney XD into a Spiritual Successor of the very network it replaced.

In addition to the greater focus on animation, the channel would later expand its programming scope to encompass gaming and reality television, including live e-sporting events, and programs produced with the Disney-owned Polaris YouTube network. In recent years, Disney XD would also become the new home for the Pokémon and Beyblade anime franchises following their previous tenure at Cartoon Network. Finally, the channel also began airing reruns of past Disney animated programming, increasing the similarities between it and its former brand identity.

In May 2018, it was announced that premieres of all Disney animated programming would move to Disney Channel, beginning with the remainder of DuckTales (2017)'s first season, though Disney XD would continue to air reruns of these shows. In 2019, Disney shuttered the Australian and Indian versions of Disney XD, the latter of which was replaced by Marvel HQnote a TV version of Marvel's website for kids and families. The following year, the United Kingdom version (and the rest of Disney's U.K. kids' nets for that matter) shut down in Septembernote as Disney never reached new carriage deals with Sky and Virgin Media.

Disney XD is not to be confused with the former Disney Xtreme Digital at Disney.com. In fact, it's been stated that the "XD" in the channel's name has no real meaning (aside from the obvious).

Shows that air (or aired) on this network: